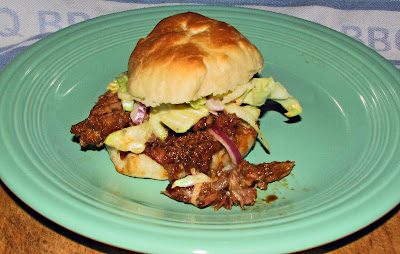 It is that time of year for the big game,snacks, beer and 'Super Bowl Sliders'. The Super Bowl is one week away and we need to get our game strategy together. Several of my fellow colleagues have been cooking pulled pork in the crock pot. This was inspiration to give it a Chilebrown twist. Over at the 'Meathenge lab', one of Reverend Biggles followers suggested starting the roast on the barbeque. Our roast will start on the barbeque to infuse smoke into the meat. It then will be transferred to a dutch oven and finished in our kitchen oven at a 275 degree temperature. Once cooked it will be pulled apart and seasoned and reheated with some barbeque sauce. This scrumptious pile of meat will be served on some home made rolls with cole slaw. I feel a victory coming on.
Our roast weighed 8 pounds. It was trimmed of the outer fat and seasoned with our secret rub. A hot mesquite charcoal fire will fuel the Weber. A handful of hickory chips was thrown on to the charcoals right before cooking. The meat was placed on to the grill and the lid was put into place. The meat was turned every 10 minutes for 40 minutes. 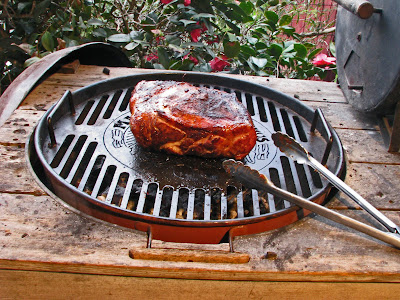 The roast was transferred to an enamel coated dutch oven. A trivet consisting of onions and carrots kept the meat off the bottom of the oven. A 12 ounce 'King of Beers' was poured into this cauldron of love. The talking meat thermometer was tucked into the roast and all was placed in the 275 degree oven. Four hours (190 degrees) later some lady started shouting French at me. I have no idea what she said but I took the roast out. The roast was left to cool while the slider rolls baked. 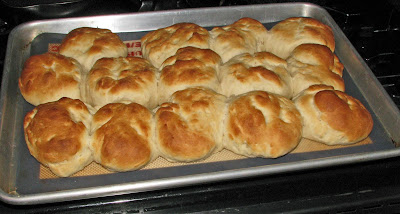 Combine yeast honey and milk together and let yeast bloom. Combine shortening and salted flour. Use a fork and cut shortening into flour. Combine all ingredients and knead for 10 minutes. Place into an oiled bowl, cover and let rise for 1 1/2 hours. Punch dough down and form into small round balls. Place onto oiled cookie sheet and flatten your dough balls. Cover and let rise for 40 minutes. Bake in a 400 degree oven for 15 minutes or until browned.

Take a proportion of your pulled pork and reheat it in cast iron skillet. Add some salt & pepper and your favorite barbeque sauce. Serve this on your slider bun with some home made cole slaw. We have a TOUCHDOWN!!!!! The meat was smoky and oh so tender. With this method the cooking time was cut tremendously. The only thing I miss is the bark (meat candy) that true smoking will create. This will rock any Super Bowl party.

How did I miss the post on the talking thermometer before?? I have gadget envy! And I'm going to try baking your rolls - too cool! Do you use that same roll recipe for hamburger buns? I hope your team wins; your guests certainly will!

Great sliders. While I love Hawaiian rolls for sliders, I just want to try making my own like you did.

Yum! And homemade rolls too.

I got a chili spectacle planned, and like you, it'll be a whole new experiment.

I will be airborne during the Stupor Bowl so have a cold one for me.

That pork looks fabulous... Send some to my house!

Zoomie, You can use this recipe for hamburger buns. I used a slider roll recipe and tweeked it a little.

Chris, Kailyn, and Cookiecrumb, Home made rolls fill the house with an odor that is so warm and comforting. You should bake some rolls just for the smell.

Greg, If it is any concellation, I have to work.

Zia, The sliders are in the mail.

Just out of the huddle and the plays have been called. I have a couple of slider ideas up my sleeve. These look great Chili