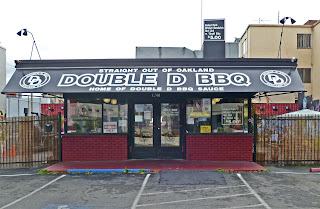 This was an adventure in futility and perseverance. ‘Double D BBQ’ is a small barbeque restaurant located in . They have a reputation for having some of the best BBQ in town. They are only open 4 days a week with limited hours and even then are known for not always being open. To complicate the scenario they are in a location that is not easily found. Our first attempt at going to Double D BBQ we could not even find it. We had the address but no GPS.(1240 1st Av.) Simple enough address but not easily found in the maze of the numbered streets of the area. My second attempt was on a Wednesday during their posted hours. I was in the area and had a Google map in hand. Closed! Several weeks later on a Thursday I was shut down again. Double D BBQ has a cult following and we wanted to know what all the buzz was about. This time we called and they were open. 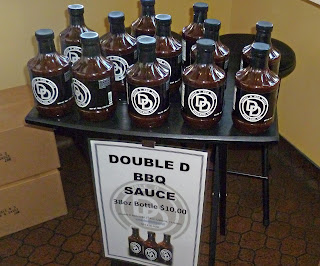 We found Double D BBQ with out a hiccup. It is located on a small street on a small lot between two tall buildings. You would never stumble across this location unless you were looking for it. Once inside, it looks like an old style burger joint. It is decorated in ‘Oaktown’ specific kitsch. An Oakland Raider fan would feel comfortable here. Yes, we are Raider fans and we loved the vibration. The menu is small with the four meats, links and a couple of sides. We placed our orders. Ms. Goofy ordered her pulled pork sandwich and I a combination of brisket and ribs.  It was a beautiful day to take advantage of the outdoor seating area located on the side of the building. This area was colorfully decorated with plants and urban style murals. Our food was brought to our table. 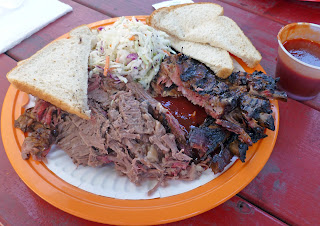 It was time to see what all the hype was about. How did it taste? Dr. Biggles used to tell me; “You can have the best BBQ meal in your life and come back three hours later and have the worst meal ever”. Timing can be everything for good bbq. We must have hit it at the wrong time. The brisket was full of gristle and fat. It was overdone to the point of being mushy. No bark, lack of seasoning and to top it off no smoke flavor. The ribs were not much better. The meat was overcooked, no smoke, and I received the end piece that is full of little bones and cartilage. My side was Cole Slaw. It was full of big chunks of black pepper but not salt. It was dry and lifeless.  Ms. Goofy’s pulled pork was decent but she said all she could taste was the sauce. 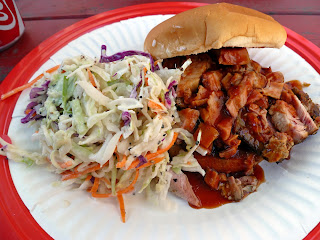 The highlight of this meal was the sauce. This was a sweet tomato based sauce with good seasoning and just the right amount of heat. Maybe we came at the wrong time. When is the right time and when will they be open? Double D BBQ was a disappointment. There are too many good barbeque restaurants to make the effort to return. 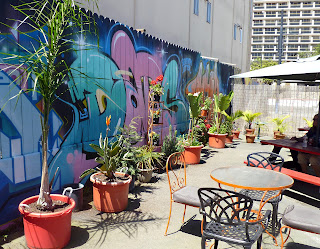 Sad, after all your hard work to get there. I hope you get a good plate of barbecue soon, to wash away the disappointment.

Did you purchase some of the sauce?

I remember getting a meal in Bolinas. It was their way of saying "Don't come back". With their hours and such maybe...

Chilebrown, that is such a great story. Terrible ending, yes, but such a well-told tale. I loved it.

Zoomie, We will cook up a storm and we have competitons soon.

cookiecrumb. You made me glow.

Toons, We should of called. They shut down if they are catering. We were in the neighborhood the second and third time.We have no deisre to return.

Dang, nicely spun there Meat Man! Now you have my interest piqued, would like to see if I can squeeze out an edible meal. If nothing else, would be nice to return and talk to the owners and see what the deal is. If this is their standard spew, there's not much of a chance for it to continue any appreciable amount of time. You mention a cult following, wonder what that was all about.
xo, Biggles

I have been several times and NEVER disappointed. True the hours are weird but that is only because once the Q is gone they lock up shop and go home. If you call ahead they can tell you how quickly you need to get there or that they are about to go home. Call about 11. Phone is 228 7000 (510). Aside from wonderful Q - I love the brisket and ribs and potato salad is great - they have an adorable waitress. It is hell to find the place because Oakland is always tearing up the streets around the place. But if you call they can tell you how to get there (depending on whether one road or another is closed). No question is is a struggle to get to eat there BUT IT IS SO WORTH IT. Makes Flints and the other Oaktown BBQ pale in comparison and the sauce, OMG the sauce. It might be available at Whole Foods soon.

Yeah see, I knew there was a secret! One has to hunt the que down, stalk it. Only strike when it's known to be perfect in every way. It's the only way in.

Unknown, You have experienced and lived the cult following. I am from out of town and will not make the trip here again. I can go to other BBQ places in Oakland that are more consistent and BETTER in my opinion.

meathenge, I do not even want to talk to the owner. He was there. I needed to take a piss.They would not let me use the head.They finaly let me use the bathroom when I threatend to drain the snake on the outdoor patio. Not a good experince. Mushy Meat, sucky sides,terrible hours/location. Why go back?