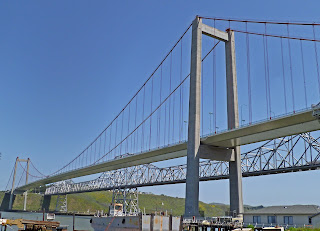 To be a guest at the exclusive club, “Under the Bridge”, was a welcome invitation. Meetings are held once a month at the ‘Crockett Bass Club”, located right under the . Fishing, food, adult beverages, sports, camaraderie and more food is the purpose of this Men’s only fraternity. Usually there is a food theme for each meeting. This month home made sausage was the goal. After receiving my ticket to this event the sausage stuffer was put into action. My contribution was a pork sausage with roasted ‘New Hatch’ peppers. 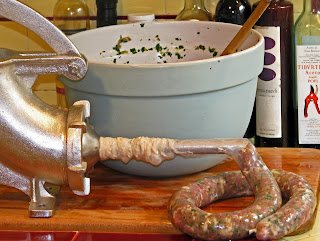 It just so happened that pork shoulder was on sale at Wally-Mart. Shoulder has the perfect fat to meat ration for sausage. This meat was run through the Kitchen-Aid meat grinder on a course grind. Some roasted ‘New Hatch New Mexican’ green chile was taken out of the ‘’ and thawed. Cilantro and garlic was pureed with the peppers that had the skins, stems and some seeds removed. This was all mixed together with spices and stuffed into casings. 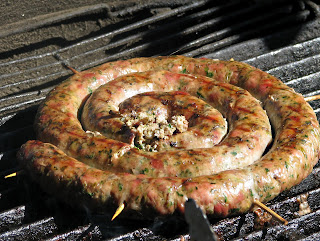 Once at the meeting, I found out the members were actually making sausage at the club. They had a meat grinder and sausage stuffer working at full speed. The kitchen had been transformed into a sausage factory. We had quit the assortment of meats and spices. Some of the meats were: wild turkey, chicken, prime rib, pork, and tri-tip. This was a hands on experience. Everybody pitched in to the process. We mixed and matched different meats and spices to create numerous varieties of sausage. It is a good thing there were a lot of cold beverages to keep us hydrated. 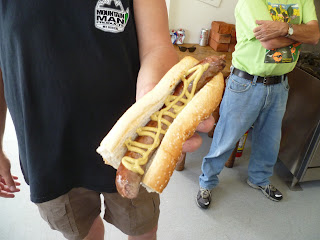 It was time to fire up the grill. The menu was simple. Numerous sausages, mustard and rolls were it. I did bring a couple of spears of asparagus to throw on the grill. One can only eat so much but we tried to exceed that limit. With a beautiful blue sky framing the Bridge it was a great day being under it. My invitation has been extended to next month and the theme is Pizza. Oh Yeah!
Posted by Chilebrown at 8:10 AM

My oh my. You do know how to have a good time indeed. Sounds like one 'l of a day, Cheers! PS...Bart's Blazin' just picked up "supplies". Thank you for that!

What a good idea to make sausage in a group - some to eat now and (I hope) some to take home.

Toons, It is a lot of fun at the meetings. I hope your product does well everywhere. It is a winner.

Zoomie, There was a lot to take home. You can only eat so much. Lucy wants to meet Cora.

That's a nice looking hunk of sausage, especially with the green chunks of chile in there.