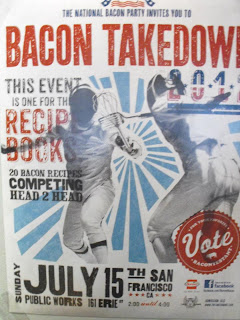 What do you call a competition that showcases multiple bacon dishes and you get to sample them all? The ‘Bacon Takedown of course. The winner will win a years supply of bacon. We are in at the ‘Public Works’. This is a hip and trendy venue that is perfect for bacon consumption. The word got out and people were lined up before the opening. We arrived early to stake our place in line. The crowd was lively with bacon attire and a Mohawk or two. The clock struck two and the line snaked in for a bacon satisfaction. 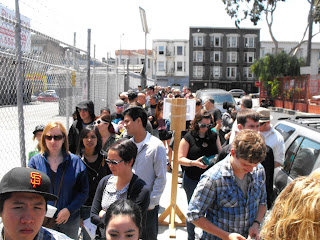 We had two levels of competitors; upstairs and downstairs of course. The promoter was on stage announcing the ground rules. It was our job to taste each and every entry. When we were finished, we would choose a competitor and vote. There were numerous tables set up with serving and warming trays. Some competitors had small portable stoves to prepare their entries. 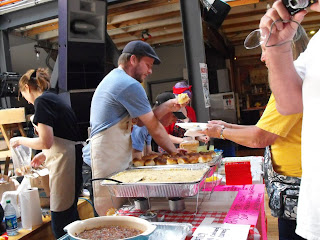 Bacon maple waffles, bacon jello, bacon smores, bacon soup, bacon sandwiches, let me catch my breath for a second. We filled up our plate and headed to the bar for some libations to lubricate our bacon gullets. After our short break we sampled on. Bacon cannoli with a rich bacon cream, bacon pixie sticks, ‘bacon belly burger with blue cheese bombs’, bacon quinoa salad, and a Korean fried takoyaki style bacon ball (with or without Kimchee) were offered. Bacon, Bacon, Bacon. 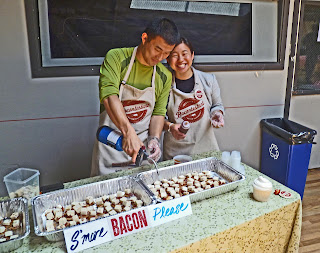 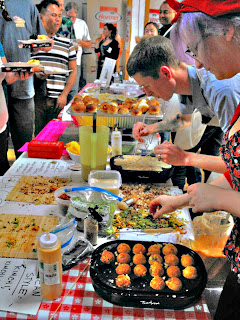 We came, we saw, we conquered the Bacon Takedown. This is my kind of event. Next year I will have to compete. A year’s supply of bacon sounds very tempting. We are looking forward to next years Bacon Takedown but for now I need some pepto. 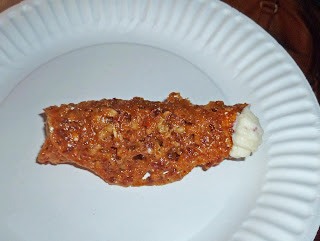 Posted by Chilebrown at 8:21 AM

Abram Jones was my cameraman and took several of these images. Thanks Abram!

So how much bacon would be a years suppply for the Mad Meat Genius (aka Bacon Boy)? Which dish won the contest?

Zoomie and PresidentofCookies, here are the results.

The first place team served them with Kimchee or not.

Was Abram one of your Meat Men in the Dutch oven competitions? If so, I've met him. Cool guy. Linguist. Hi, from Deb!

cookiecrumb, Yes Abram is one of the original 'Meat Men". Did you know Abram is lead singer in a band? Abram wears many hats.

Which of the two was your favorite (if you liked them)?

Thanks for coming, and blogging about the event!

Dennis Murphy, I especially liked the second Korean style. That was a great event and looking forward to the next one.