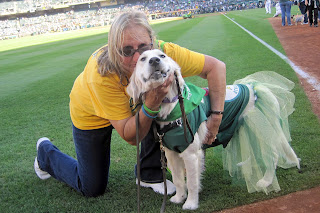 We are in Northern California way up in Siskiyou County in the small town of Montague attending and judging a BBQ competition. I am not sure if the World Wide Internet reaches this remote section of our golden state. Hence, we would like to show you a couple of images of Lucy at the ballpark. 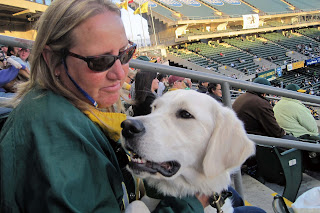 The Oakland A's sponsored a bring your dog to the ballpark day. Approximately 720 dogs and their owners attempted to set a Guinness world record of most dogs at a sporting event. Ms. Goofy,The President of Cookies & Lucy attended and had a doggone good time. Lucy did not win the photo contest but we would like to Thankyou for your support. See you next week.
Posted by Chilebrown at 12:00 AM

Was she good? My dog loves dogs, but she'd be a total wiggling, manic mess. Probably barking too.
Nice to have a mellow breed. And so good looking.

Chris, Ms. Goofy, The President of Cookies and of course Lucy had a great time. Way cool!

cookiecrumb, Lucy had a great time. She loves attention and gets a long with everyone.