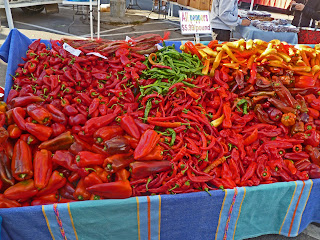 I asked our friend Melanie if she had any recipes to showcase ‘Duke’s Mayonnaise’. She sent me this link for pimento cheese. I have to admit that pimento cheese was not something I was very familiar with. This recipe sounds simple, so let’s give it a try. Some beautiful pimento peppers were found at the Marin Farmers Market. They did cost a weeks salary but WOW they are pretty. We are going to use some aged cheddar cheese that we found at Rumiano Cheese Company in Crescent City. Duke’s mayonnaise will be the binder of this cheese concoction. 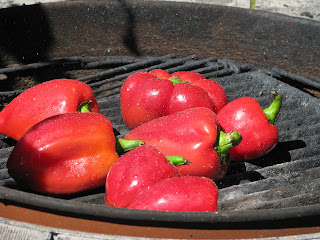 The first task at hand was to roast our bright red pimento peppers. These peppers are fairly sweet, so roasting will bring out the sugars even more. A hot mesquite charcoal fire was built. The peppers were blistered and blackened on all sides. The peppers were put into a bowl and covered until they cooled. All the blackened skin was removed and the peppers chopped. We measured out 7 ounces of chopped peppers. 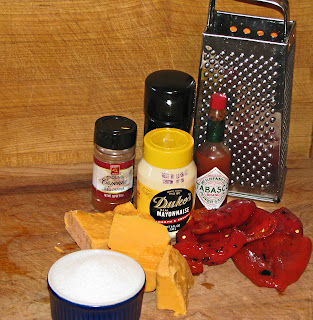 Eight ounces of the aged cheddar was grated and put into a bowl. Green onions, salt, pepper, a pinch of cayenne, a dash of Tabasco, chopped pimento were all mixed together with Duke’s mayonnaise. This mixture was covered and put into the Chilebrown ice cave. It was that simple. 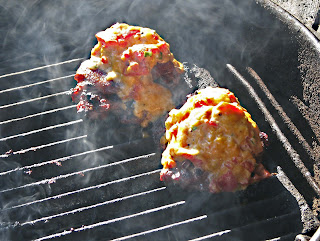 We had some pimento cheese with some grilled hamburgers. What a treat.  The aged cheddar combined with the tasty roasted peppers was spectacular. Duke’s mayonnaise made this spread rich and decadent. The onions and cayenne raised the flavor bar to the sky. This was so good I had to make a bacon and pimento cheese sandwich. I just put my sandwich in the toaster oven and drooled till it was melty and gooey. Oh my gosh! I have missed out on pimento cheese most of my life. I am now in love with pimento cheese. 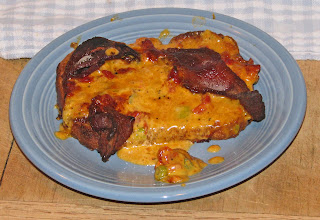 That sounds really good! I think this is the five star recipe for pimento cheese. The pimento cheese I seen before was processed yuck.

Happy for you! Fun to find a new favorite just when you thought you had seen it all!

Greg, Our friend Melanie suggested it. She is a Foodie Queen.

Zoomie, The wonderful thing about food is you will never see it all. This is a new favorite.

Great post! And to share some of the lore of pimento cheese, here's where I got my first knowledge of this Southern classic. http://chowhound.chow.com/topics/297400

Melanie, Thanks for the heads up on Duke's mayonnaise and pimento cheese. I am a new convert and enjoy both.

I became a Dukes mayo fan years ago, but the rest of my family is Hellman's. I think I'm adopted ;)

Pimento cheese ROCKS!!!!!!!! Of course, I've eaten it for 40+ years. I'm glad to see you did it on the burgers, a perfect combo. Makes a great "jucy lucy" style burger too.