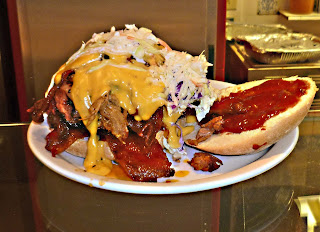 We got a heads up that the film crew from “United States of Food (Bacon)” would be filming at Phat Matt’s BBQ.  Phat Matt’s BBQ would also be showcasing, Charlotte & Matt’s favorite food, bacon. They called it Bacon Palooza. That’s all we needed to know. The Racing Honda might have set a land speed record traveling to our destination. We arrived at Phat Matt’s to a brightly lit dining area fueled by television cameras and the smiles of bacon and barbeque enthusiasts. 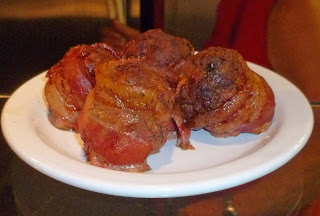 Destination America network has a series called ‘United States of Food”. This episode is called ‘United States of Bacon”. The host, Todd Fisher travels the country in search of unique and fun restaurants that showcase bacon. They chose Phat Matt’s because of Charlottes love of bacon. She frequently has specials that bacon is featured. Bacon maple pecan pie and chocolate covered bacon is always on the menu. I also need to mention that Phat Matt’s serves some of the best barbeque around. 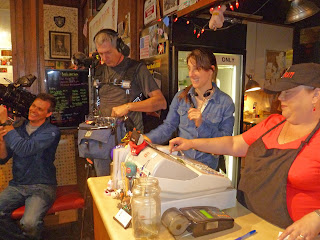 We ordered some lunch. I could not resist the ‘Bacon wrapped Burnt Ends”. I have died and gone to BBQ heaven. Ms. Goofy had some mouth watering Tri-Tip. It was hard to not order the 'Phat Balls' ( bacon wrapped home made meatballs) or the infamous ‘Phat Bacon Beastie’. Phat Bacon Beastie is a combination of pulled pork, brisket, cheese, bbq sauce and of course bacon that is piled high to create a huge tower of a sandwich.We watched the filming as we ate. 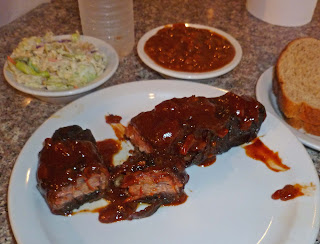 It was fun watching the filming of this television episode. Todd Fisher is a big ole ham bone of a personality. The producer saw us eating and approached us. She asked us if we would be interested in being interviewed. Ms. Goofy declined but of course yours truly could not resist. They wired me with a microphone and possible stardom began. Todd Fisher and I traded banter for several minutes. Who knows if our conversation will ever be aired? It will be up to the producer if I become cutting room floor fodder. 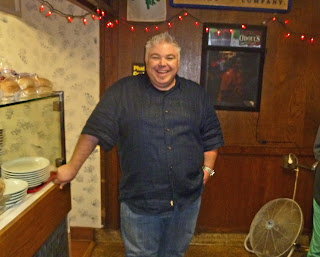 What a great experience; Bacon, barbeque and Hollywood possibilities. This television episode will be shown late December. Until then I have my dreams.

Please be sure to let us know when you know the exact air time - I'd love to see you on TV!

Oh my look at the food!! I hope they make you a star.

Zoomie & Toons, When I know so shall you.

Greg, Phat Matt's is a destination BBQ restaurant. I can dream but Chilebrown has a face made for radio.

I like that series, I've seen the steak and BBQ ones. I'll be on the look out for it.

Wow that sounds like a mouthwatering feast! I love Phat Matt's but didn't know Bout the bacon inclination! Must go check it out. Hope to see you n the episode, sounds like a good one!

Chris, I was looking at the TV guide and saw United States of Bacon. I loved the first episode. Hopefully yours truly will be in this next episode.

foodhoe, I love Phat Matt's Bacon, maple pecan pie. I love everything at Phat Matt's. Hope to see you there.