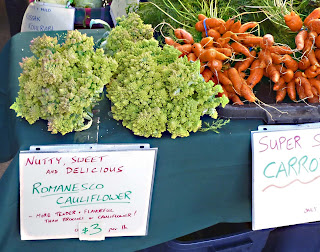 Romanesco cauliflower, broccoli, Monsanto experiment gone awry or delicious Italian heirloom vegetable will be on the barbeque today. This vegetable is referred to as a cauliflower and or broccoli at the same time. It is apple green and looks like a moon rock or craggily corral from under the sea. This vegetable is an eye catcher which grabbed us at the Santa Rosa farmers market. We talked to the farmer and asked his advice on cooking this spiraling, whirling, crater, nub studded vegetable. He said he would take a whole head and roast it in the oven. This was a no brainer. My oven will be a custom barbeque fueled by smoking hot mesquite charcoal. We only bought ½ head which weighed out to 1 ½ pound. 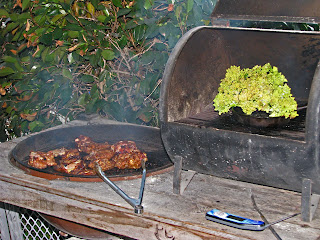 The preparation was simple. A slight mist of olive oil and a sprinkling of coarse sea salt covered our Romanesco. A small cast iron pan cradled this creature to protect it from direct fire. Our barbeque acts like an oven. We can control the temperature with accuracy by the position of the vents. If you were to use a home oven, I would suggest a temperature of 400 degrees. We roasted our cauliflower for 30 minutes. When we removed the broccoli the nubs had crisped and browned to a crispy texture. We took some scissors and trimmed the stalks from the stems. 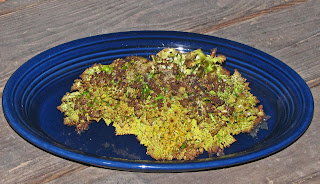 We cooked our Romanesco cauliflower so it still had a crunch and still a little chewy to the bite. The browned nubs were sweet and crunchy. The stalks had a pleasant nutty flavor. This was a vegetable packed full of flavor. It did have the flavors and textures of both a cauliflower and broccoli. What a fun and scary looking vegetable. This is produce that I definitely will purchase again.

Chris, That is probably what attracted us. I am always interested in crazy stuff. Wasn't there a movie called "The Attack of the Killer Romanesco?"

I tried this veggie for the first time on the business trip I just got home from. It seems to be the broccoli/cauliflower of choice in Europe. I think it has a mild broccoli taste with the texture of cauliflower. I liked it and will be looking for it around here...

Hey panther76, We are gong to the farmers market this morning. Hopefully we can find another because Santa Rosa was the first time we have come across one.

I love Santa Rosa. Stayed there when we got married a year and half ago... Had some liquid courage at Russian River before we tied the knot... Do me a favor and grab one of those turkey legs from Willy Bird's BBQ if he is out today...

panther76, You just mentioned all by favorites spots except you forgot Angelo in Petaluma. Today we are going to hit the markets in Oakland.

Just wanted to stop in and wish you, Mrs. Goofy and the pups Happy Thanksgiving.