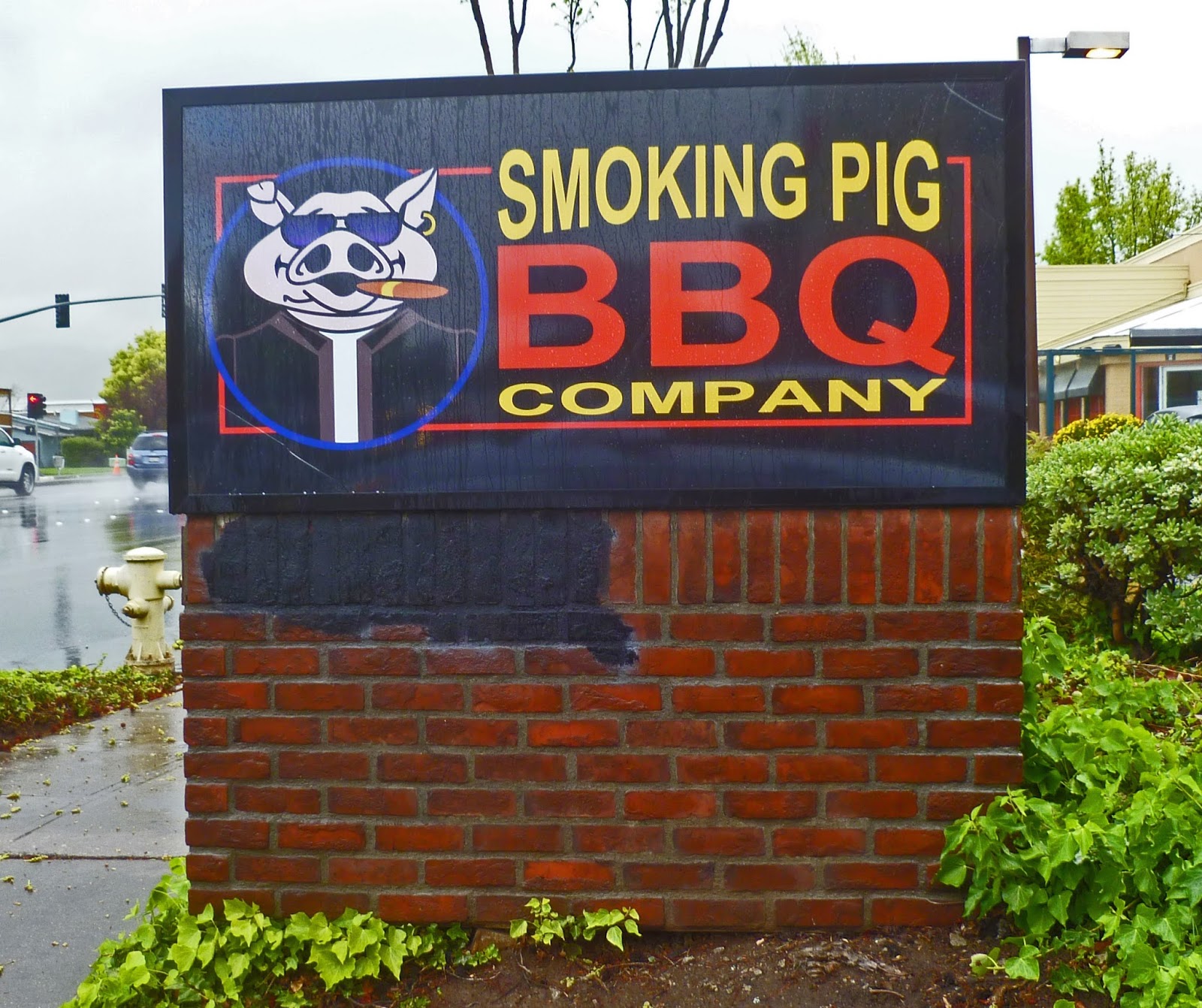 The much anticipated ‘Grand Opening’ has arrived for the ‘Smoking Pig BBQ’ in Freemont California. This opening had the social media abuzz with excitement. Last week was a soft opening and we arrived for the official christening this week. It was a rare ‘Dark & Stormy” day that raised the yellow caution flag on our journey over rain slick tracks in the ‘Racing Honda”. We arrived safely just in the nick of time. Our arrival time was at 11:45 am. We were seated immediately to a large empty restaurant. With in 1/2 an hour the place was full and quiet loud. I can imagine it was the excitement of the Freemont bbq enthusiasts in this new opening. 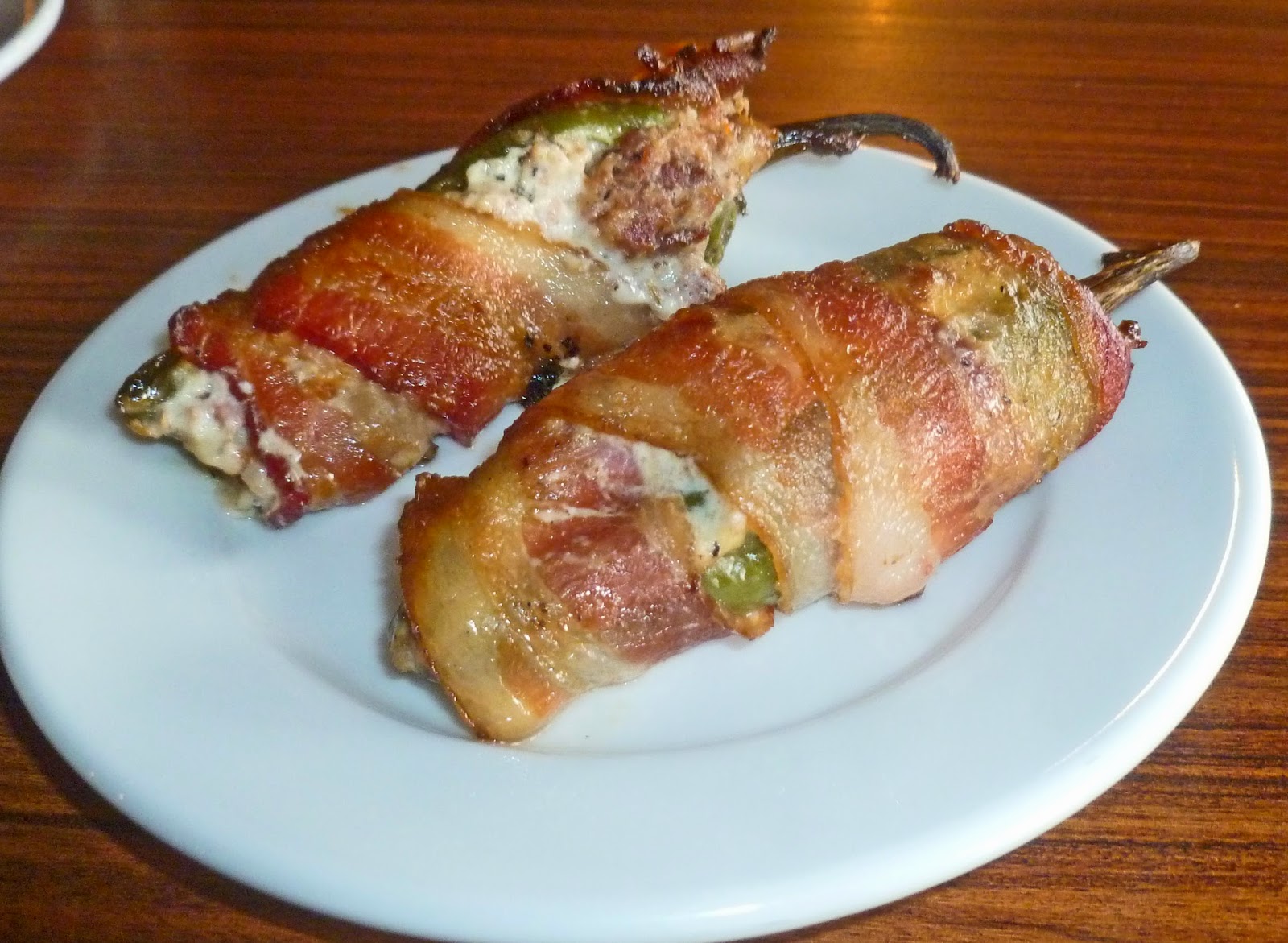 The vibration and feeling of this restaurant is of a casual sports bar. There are booths, tables and a television surrounded bar area. We cozied into a booth and surveyed the menu. Buffalo Turds immediately caught our attention and had to be ordered. Since we were some of the first customers they arrived instantly. Spicy jalapenos with a sausage & cheese filling all wrapped up in crispy bacon and smoked was perfect to start our bbq journey. 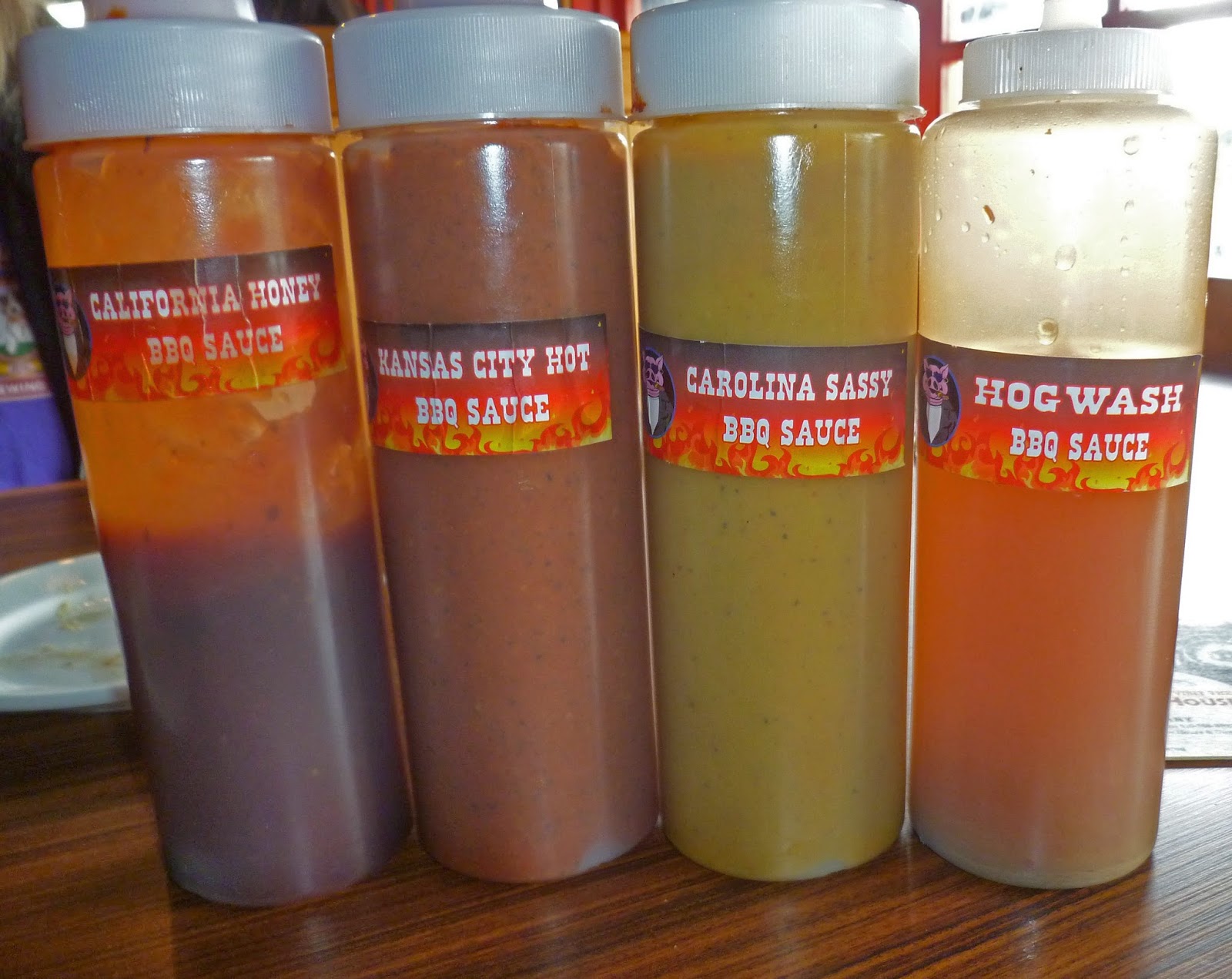 Each table was equipped with a container of house made bbq sauces.  The ‘California Honey’ was sweet with a healthy dose of garlic goodness. The ‘Kansas City Hot’ might have been warm for the chile challenged but was a very decent mild tomato based sauce. ‘Carolina Saucy’ was mustardly good and the ‘Hog Wash’ would be perfect to dress that pulled pork sandwich with its sweet vinegar magic. Overall this was a very good offering of sauces. 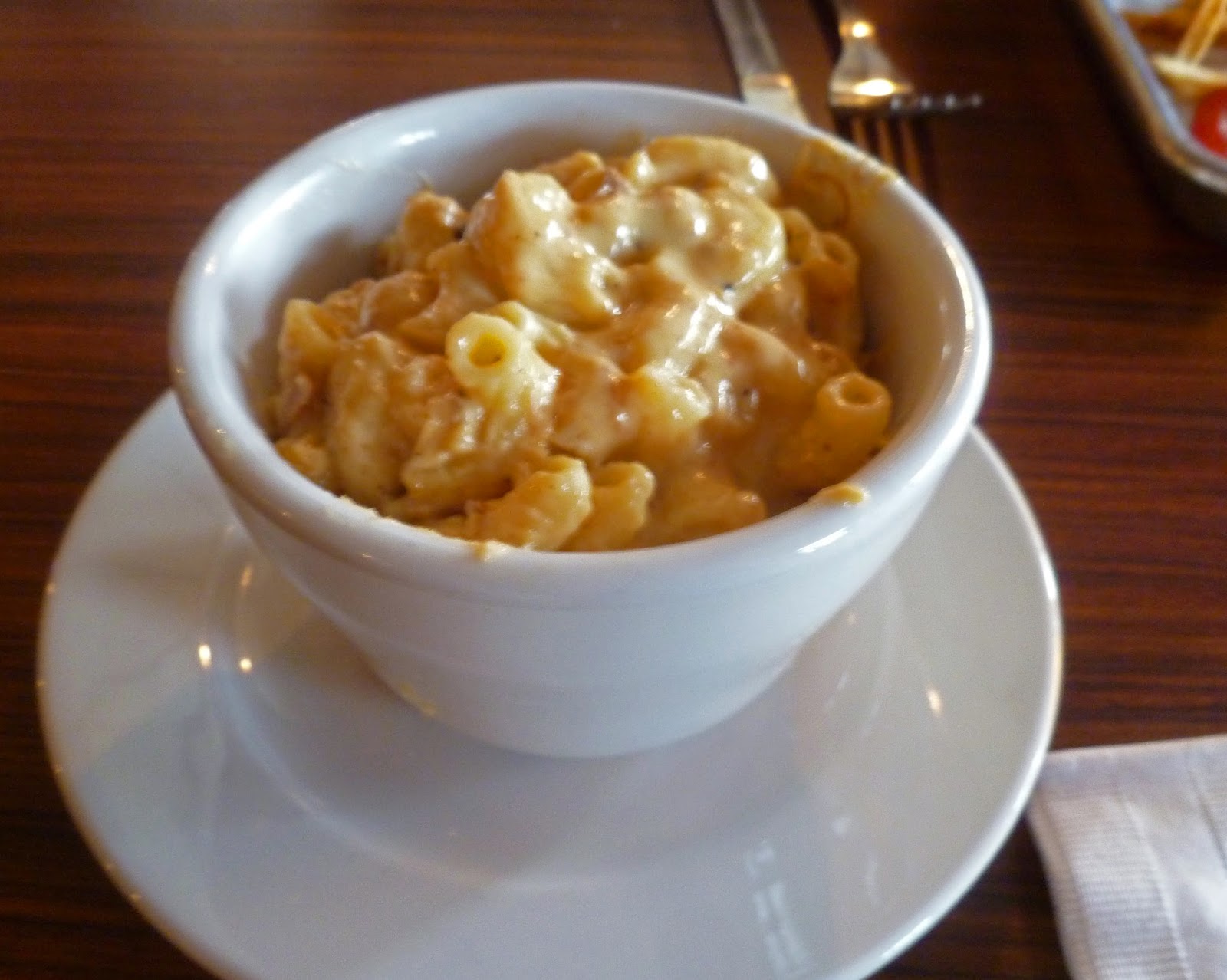 The main attraction was ribs and brisket today. This was a considered a two way combo and came with one side and a corn muffin. I opted for a second side of beans to accompany my Cole slaw. This was a good looking platter. The brisket had beautiful smoke markings. The ribs were colored mahogany with a red sheen from its generous spice rub. The ribs were cooked to a competition level tenderness. The spice complimented the meat well but I still enjoyed mixing and matching the different sauces offered. The brisket was tender with good smoke flavor. These two meats were a very decent offering that were devoured by this off duty ‘Master Judge’. Let’s move on to the sides. 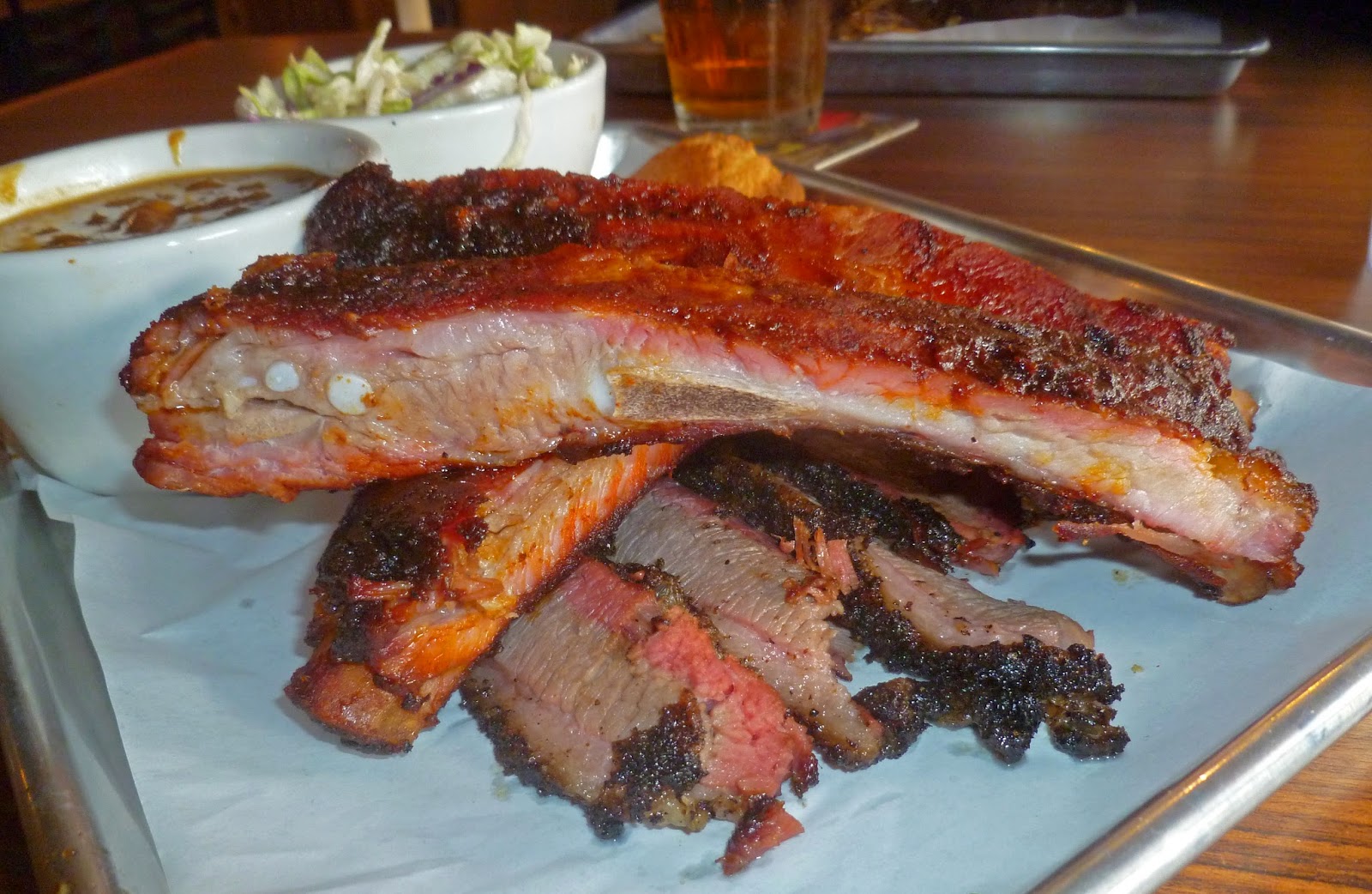 Ms. Goofy had a burger with fries. The fries were limp and greasy. We told the waitress about the fries and asked if we could have some Mac & cheese instead. She said yes and within seconds returned with the replacement. (We were charged for another side). Ms. Goofy loved this creamy and rich offering of cheese and macaroni. My sides of Cole Slaw and bbq beans were very pedestrian. My guess is the can-opener was the only skill involved in these legumes.

Our overall impression of ‘Smoking Pig BBQ’ was very positive. The service was good. The meats and sauces delivered a satisfying bbq lunch. The sides needed to be aside but dare I say “Buffalo Turds’ evened out this score. The restaurant has music in the evening and looks like a fun place. There are local micro-beers offered for libation pleasures. There still are a few opening jitter bugs that need to be worked out. We enjoyed our meal and plan to return.

Those are probably some of the best Buffalo Turds I have ever seen. A plate of those and a few malty pops and I would be happy. Is your parking karma still good?

Three Dogs BBQ, Freemont California does not have parking issues. Business are spread out through a series of strip malls. We did park in front but so did everybody else. Good times!

It sounds like a pretty good show for a grand opening. I've "opened' a couple of restaurants and it takes a bit to get the system rolling.

Greg, We will go back next month and see if the crowd has died down. We were lucky to get in when we did.