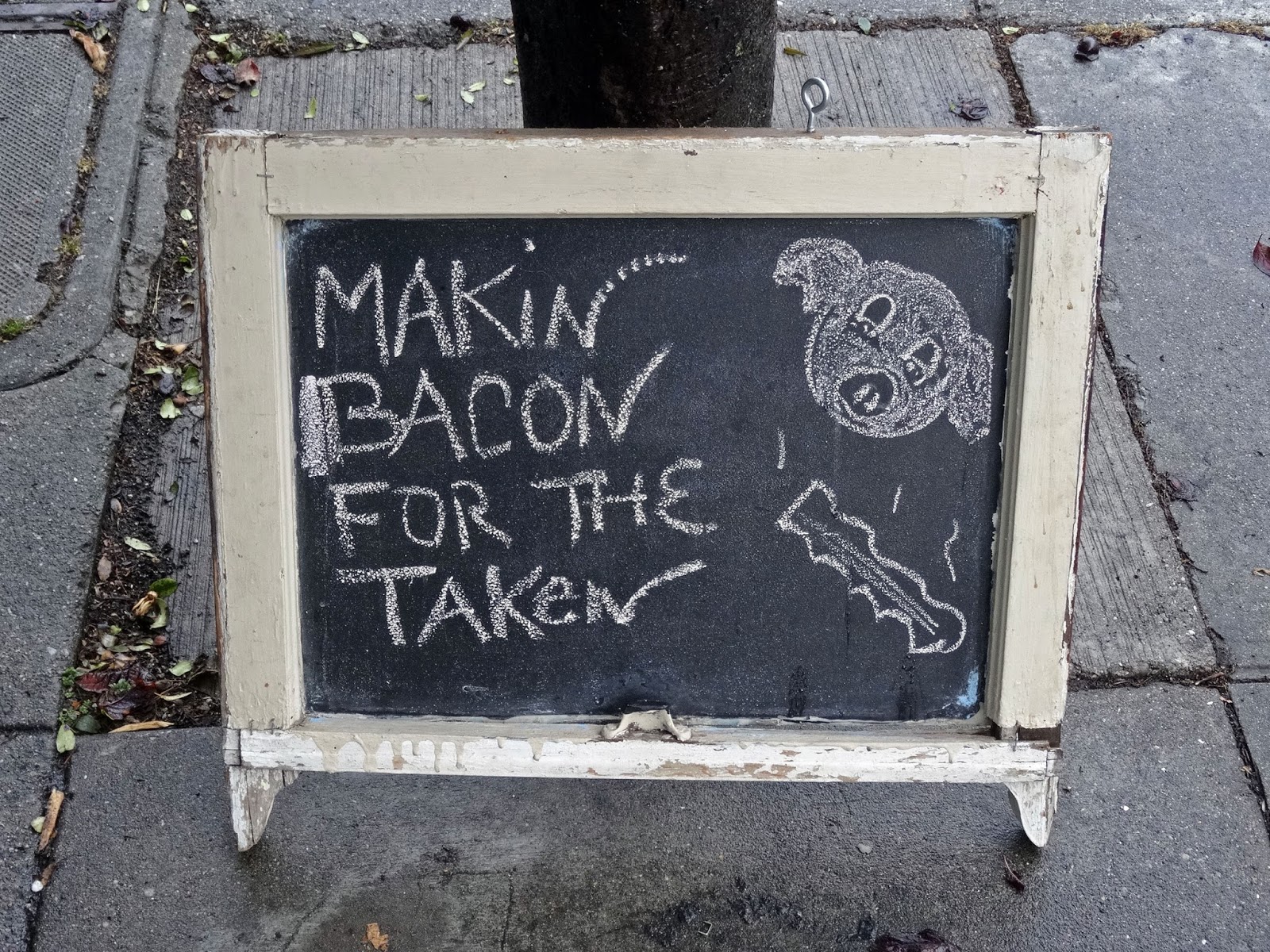 You may have heard in the media or witnessed it on the television, the ‘Bacon, Bacon’ food truck causing quit the stir. This food truck has a brick and mortar home base that serves breakfast and lunch that goes by the same name. The ‘Bacon, Bacon’ café is located right smack in the middle of San Francisco. To cross this of my bucket list took quit the travel commitment. To arrive during breakfast hours this Mad Meat Genius braved commute traffic to cross the bay bridge. The Racing Honda fouled some plugs in this frustrating excursion of travel. We arrived to find a non-metered parking spot on the same block. Parking karma has returned. 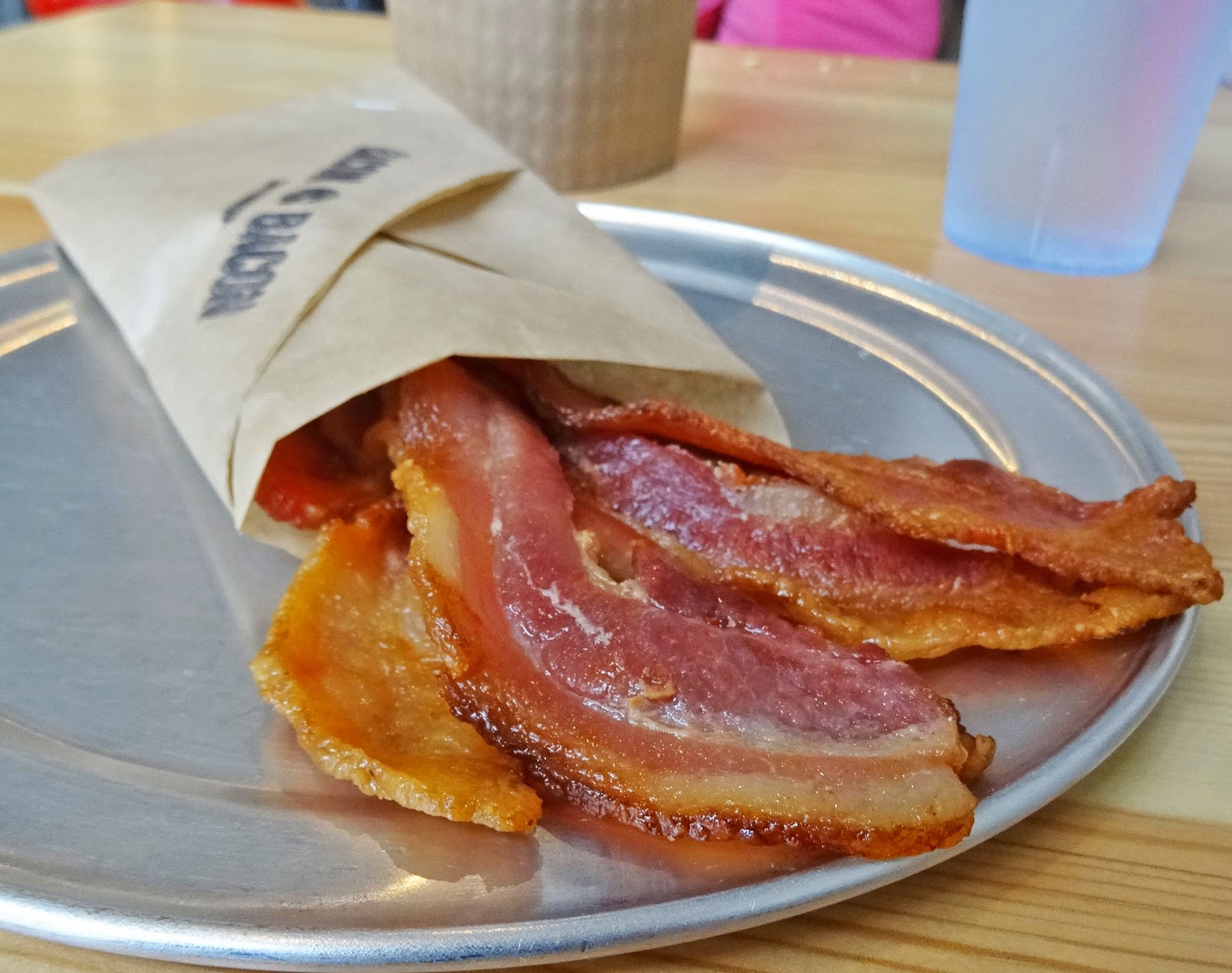 The entrance is nondescript except for the sign board out front proclaiming; ‘Makin Bacon for the Taken’. Once inside you are transformed into a magical special place. This small café is homage to the food I love. There is a sign board with a menu. You make your choices and place your order at the counter. So many bacon choices: Bacon scones, burgers, sandwiches and more bacon. The bacon bouquet is a must have item that consists of five pieces of bacon drizzled with maple syrup. 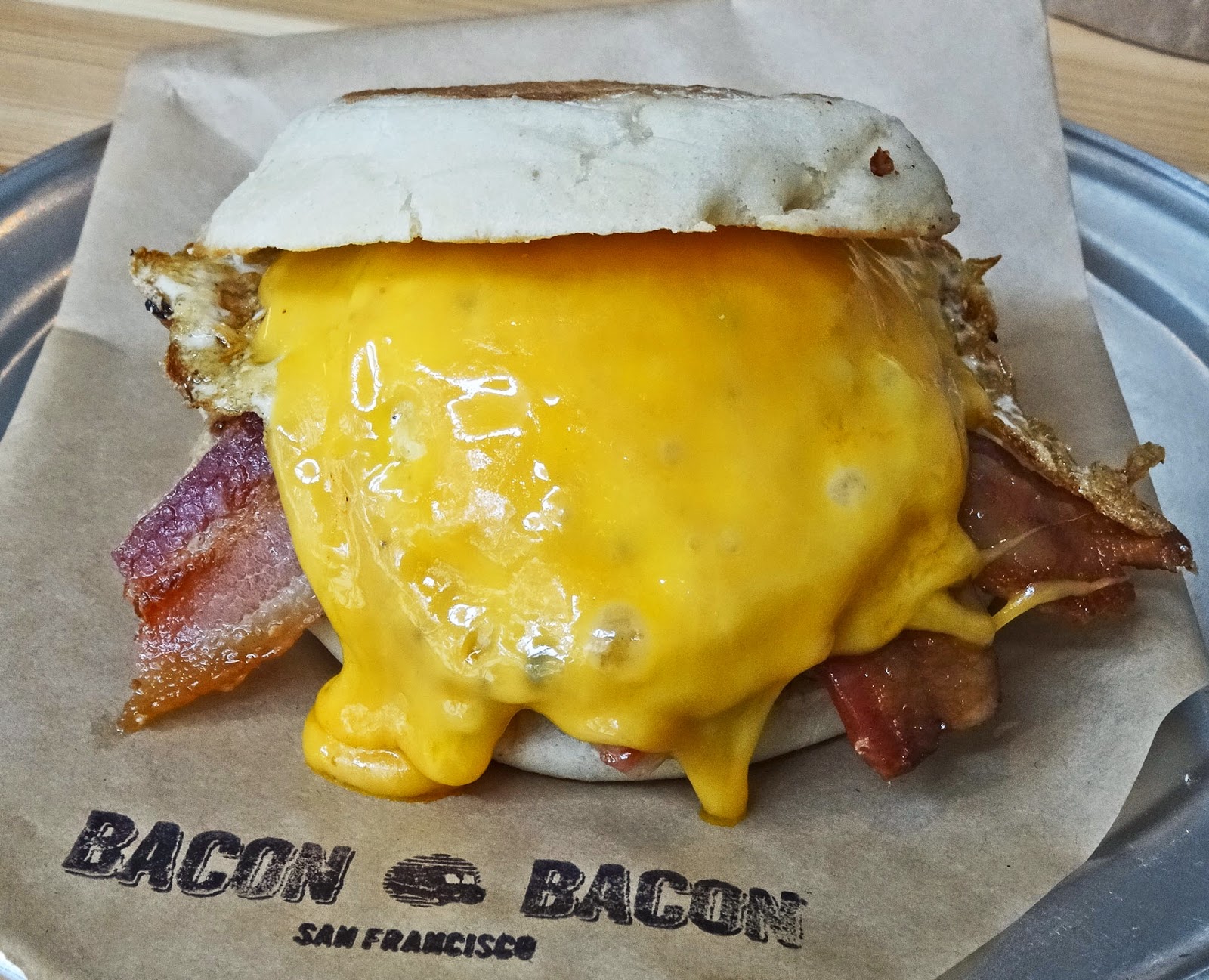 It was breakfast time so bacon, sausage, cheese egg sandwich was appropriate. I also had to order the bacon bouquet. This was accompanied by a cup of joe that a spoon could have sat up straight up in. Faster than you can say bacon, bacon the food was delivered. This sandwich was everything the doctored ordered. The bacon bouquet was devoured with bacony delight. 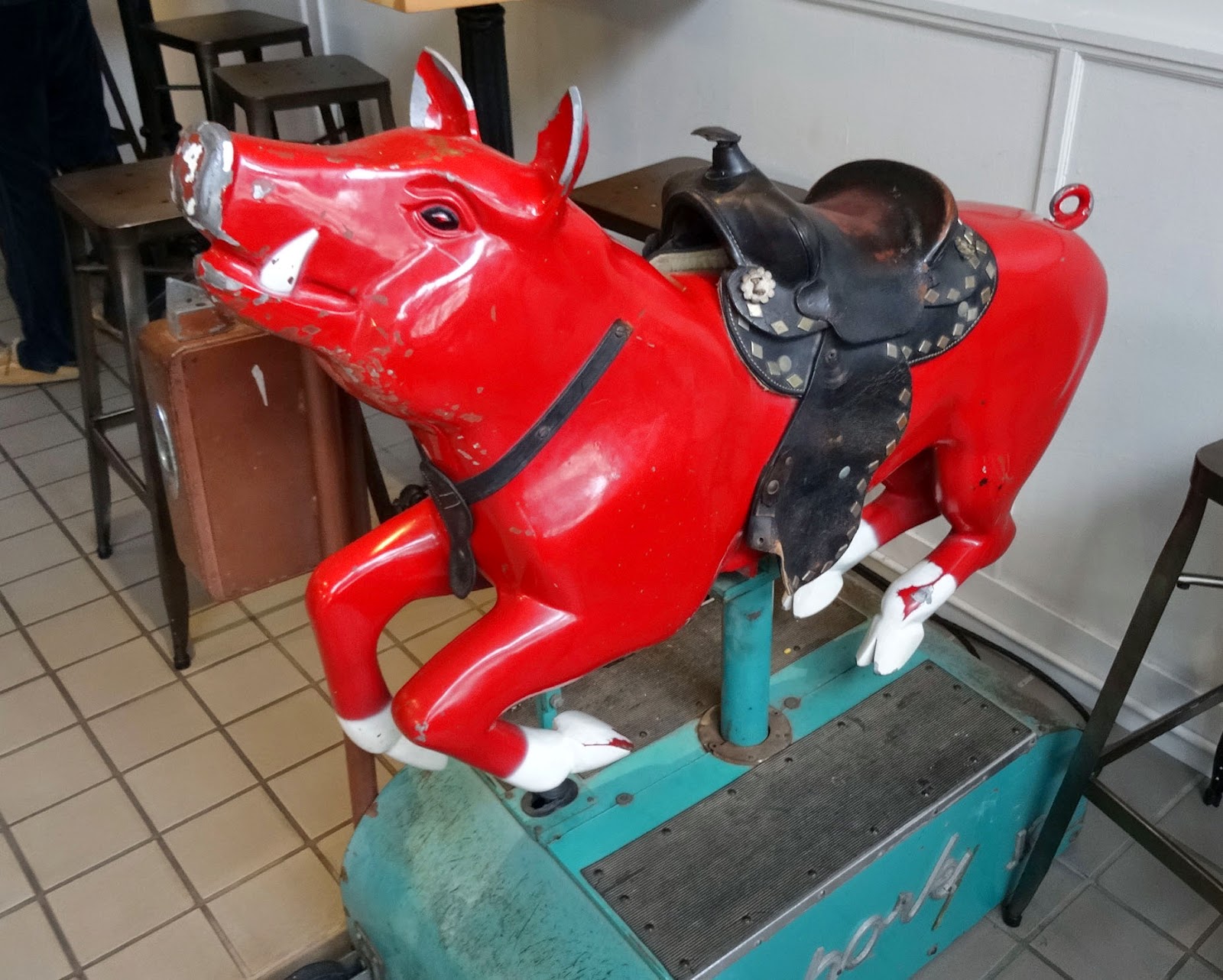 I was satisfied and had to show restraint to not order more bacon goodness. Some chocolate covered bacon and a bacon cookie was purchased for later consumption. I wanted to ride the red boar ride but I exceeded the weight limit after that satisfying breakfast. This experience at Bacon, Bacon has fulfilled my bucket list requirement. We will return to try some of their other offering. Next time it defiantly will not be during commute hours. 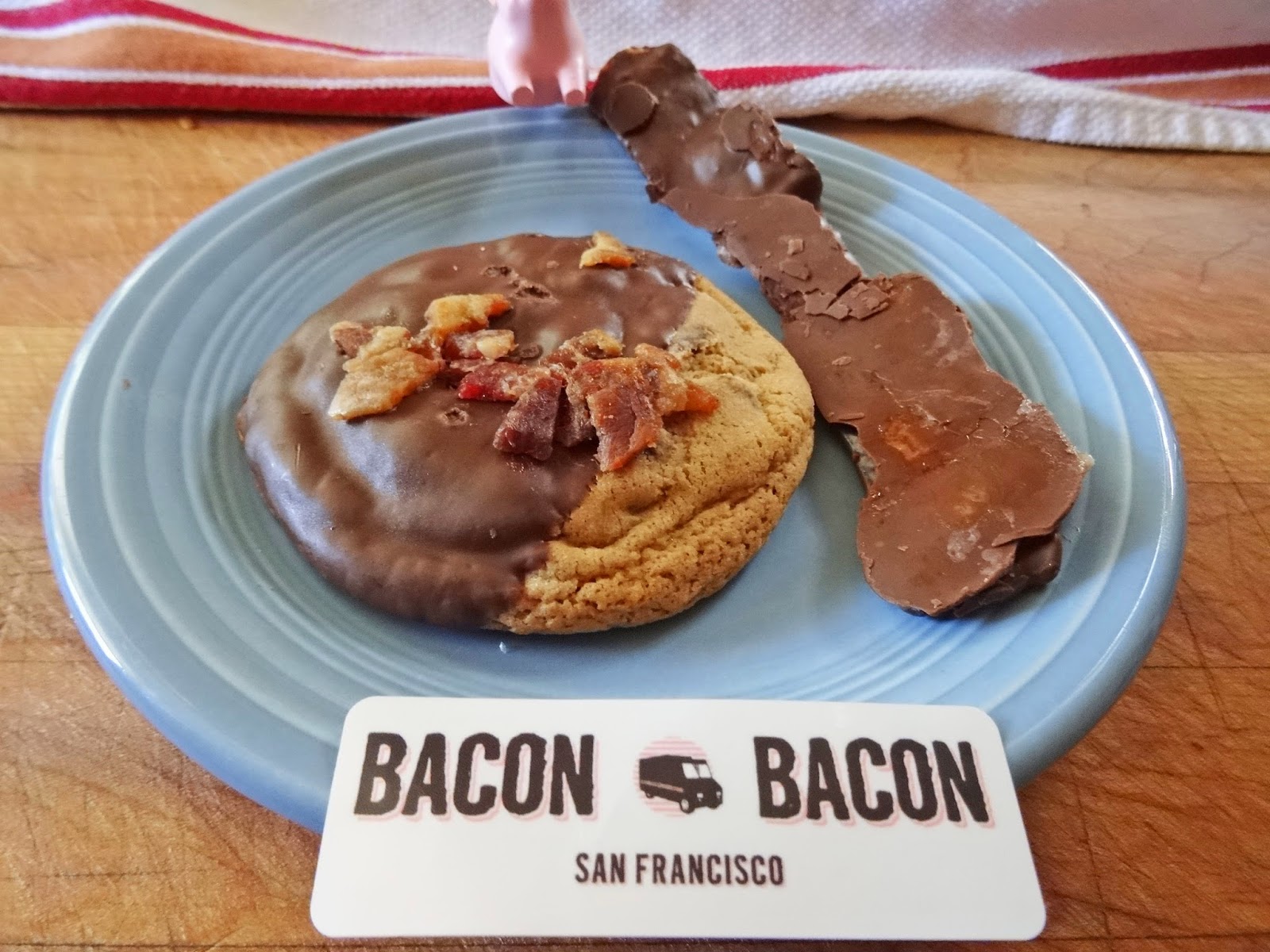 Posted by Chilebrown at 7:12 AM

I'd brave the traffic for the bacon bouquet alone.

oh man, I want to go there so bad.

Unfortunately the commute is a touch longer for me...

gusfacegrillah, I would recommend the ferry but that still is a stretch.

Love love it! I would prefer a bacon bouguet over flowers any day.

A picture of you on that pig would have been priceless. That breakfast sandwich looks over the top.