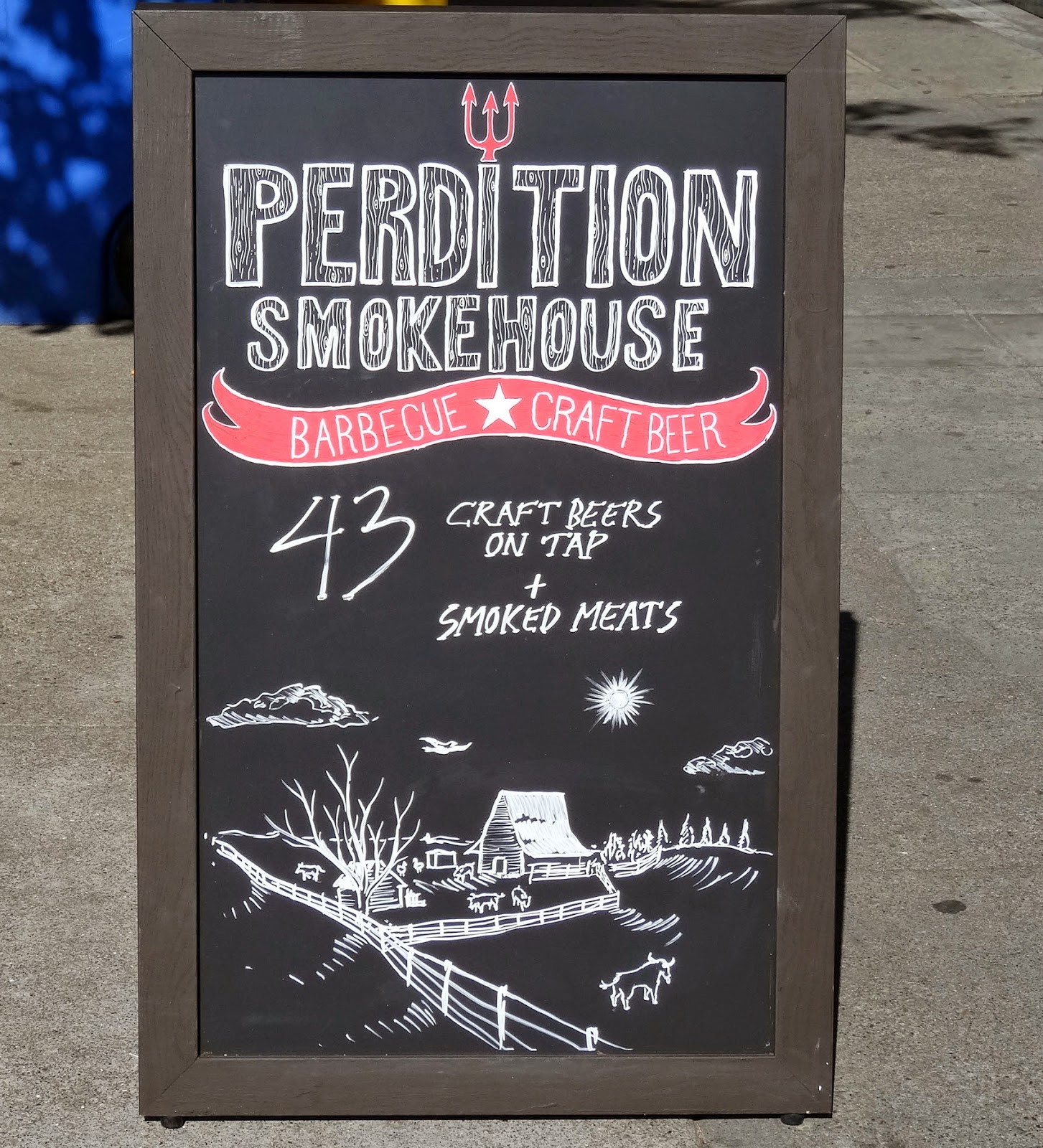 It is the grand opening of a new bbq house in Berkeley, California called Perdition Smokehouse. They have only been open a week but I have the hardly can waits to try their offerings.This is no ordinary smoke shack. This house of smoked meats will be offering 43 different beers on tap. It is located a couple of blocks away from U.C. Berkeley. Beer, bbq, and coeds may be a winning combination? Ms. Goofy is away on some mud wrestling clinic so I got to drive the Racing Honda solo. The parking karma may have slipped a little. I had to circle the block and finally settled on a spot one block away. I arrived to be one of the first customers of the day at 5:00 pm. 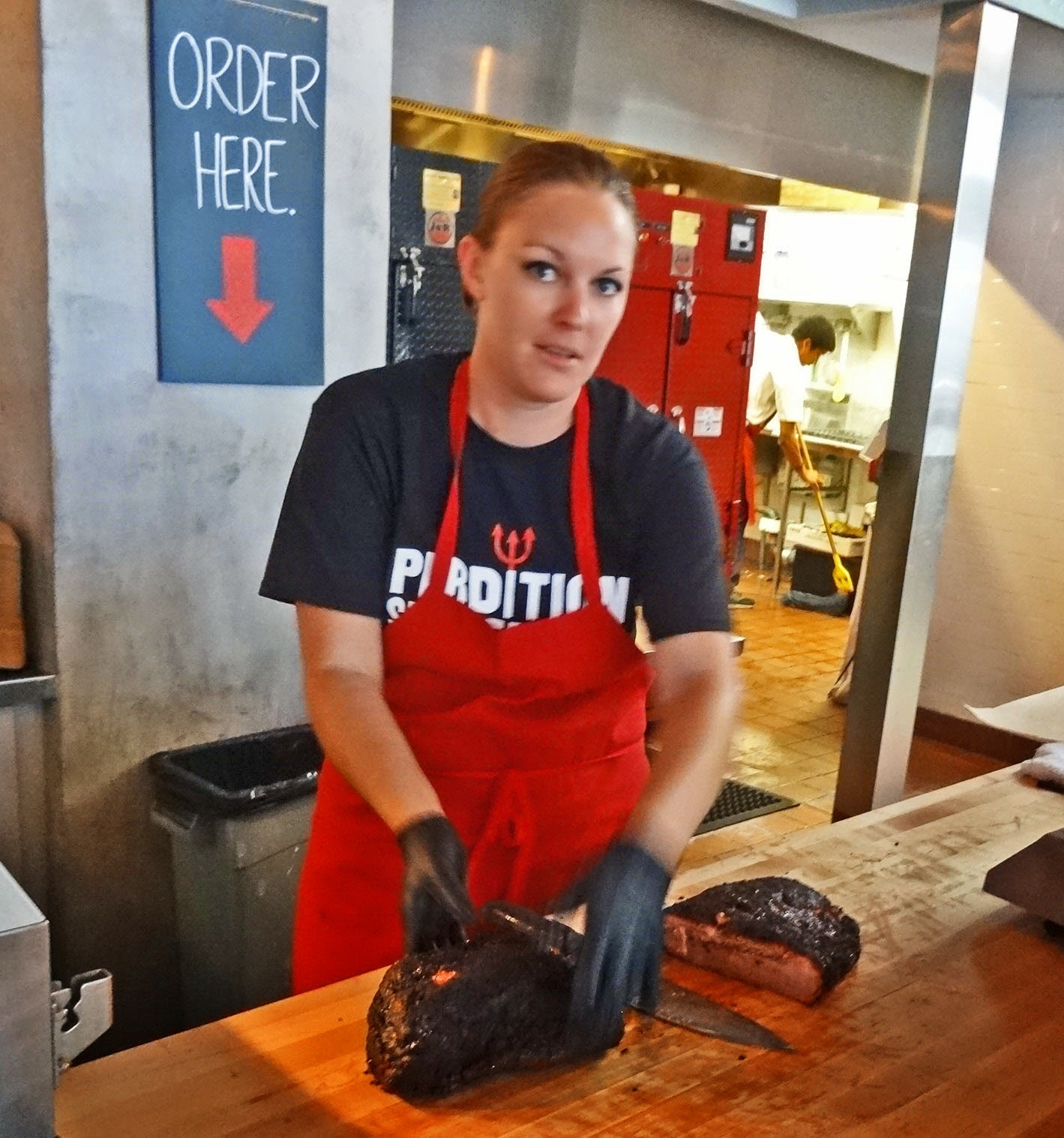 Perdition Smokehouse is located on a very busy downtown street. It is so new their is no signage in the window. I walk through the doors into a large cavernous dinning area. There are plenty new and enthusiastic  staff to greet you. The menu is written on a large sign board. You proceed to a roped line to the counter to place your order. You tell a knife wielding server what your pleasures are. She will slice and dice your requests and place them on the scale. This server paid very close attention to this scale. The person before me was denied that extra piece of brisket because it would of been 1 ounce over the target weight. There is another server who will dish your requested sides and finally a cash register. This is the opening week so I will not mention that this method was not very efficient, slow and scale challenged. 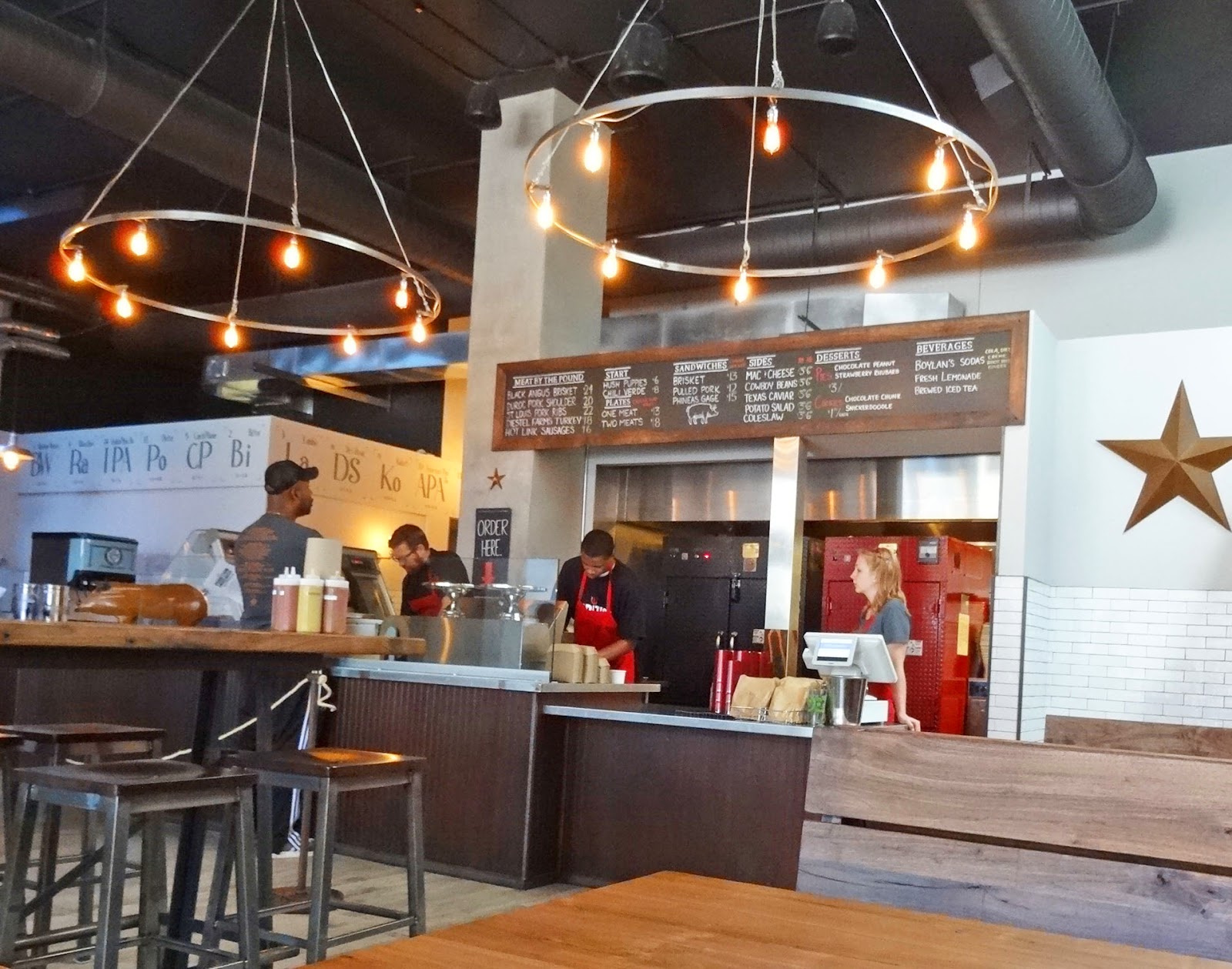 There is a separate area were the bar is located. The menu is huge, forty three beers to be exact. So many choices had me stumped so I just had some H20. I had my choice of a table or high tables with stools. Each table had an offering of four different house made sauces. They were the usual offerings of a Kansas City tomato based, mustard, vinegar &pepper and a spicy sauce. These sauces were decent but not outstanding. I did have a preference for the sweet/tart mustard based offering.
My plate looked delicious The ribs and brisket had great color. The slaw was a red cabbage mixture that made my tray glow with bright color.. I would like to mention the uneven portions of this offering. I ordered a two meat combination. The scale only allowed me two ribs and two small slices of brisket. The slaw was proportionately uneven to this picture.The cowboy beans looked a little forlorn even though it was the beginning of dinner service. Now for the million dollar question; How did it taste? 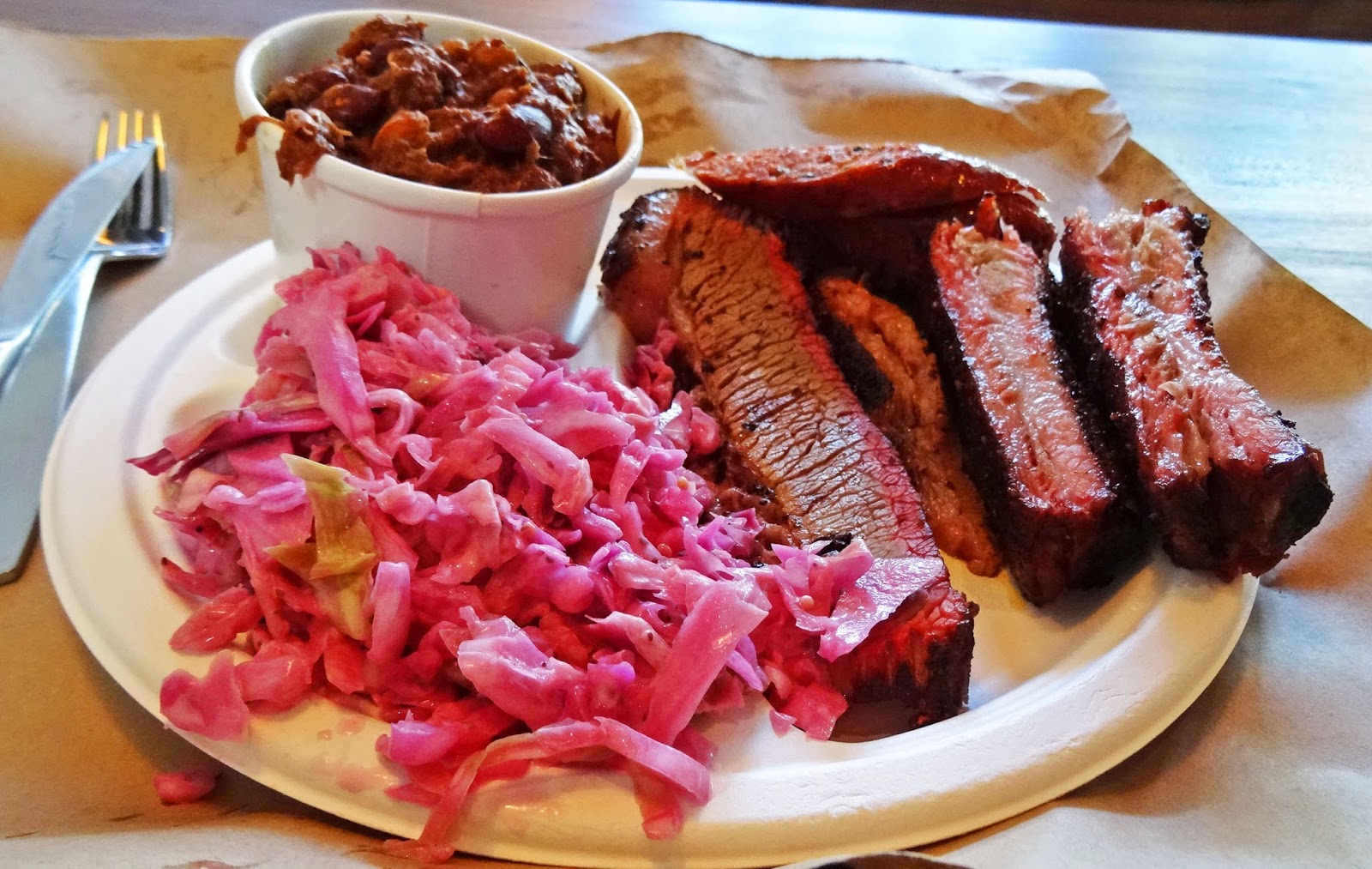 The smoke was present but sublime. The ribs and brisket were cooked properly. They were tender. The ribs had a spice crust that was very flavorful that teetered on the salty side. I slathered them in the mustard sauce and enjoyed them. The brisket was decent enough but not memorable. The slaw was flat. It was exciting with color but did not deliver with vibrancy and seasoning..The cowboy beans may have been the highlight of this meal. They did not look the best but were hearty and studded with soft pieces of brisket. 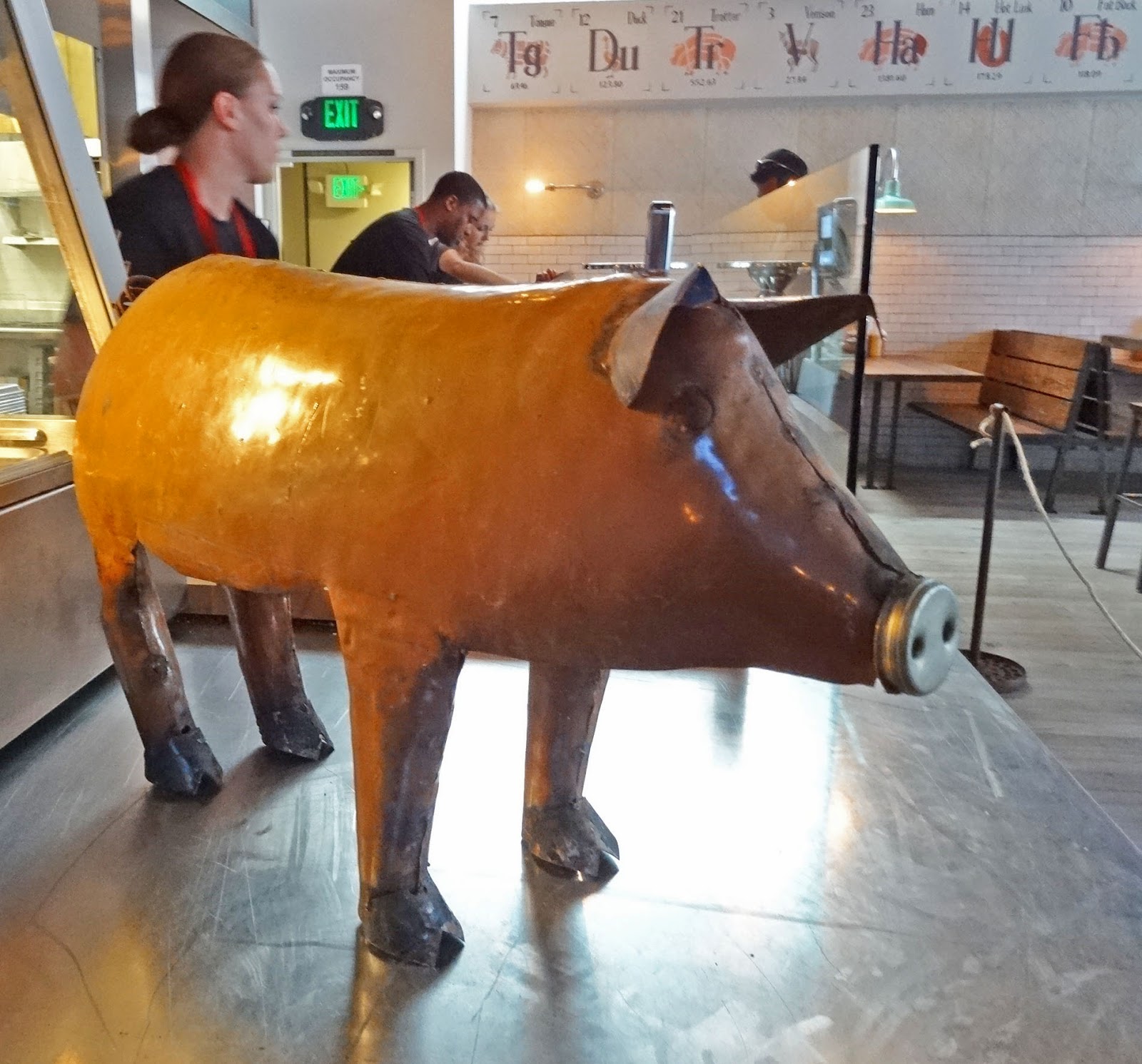 Perdition Smokehouse has the potential to be a destination bbq restaurant. This place has several selling points that may shine. It is located in a busy area near campus. The beer selection is huge. The food was decent. I say decent because everything tasted fine but nothing reached out to say "Wow'.It is opening week and some tweaking in the ordering station may be prudent. I also felt the scale may need to be adjusted to justify their prices. We may return so Ms. Goofy can give her two cents worth.

They are still in my no-go one month window, so I haven't been but I already have a gripe.

Who sells ribs by the lb???

Big fan of the Trappist, but I am very wary that they can take a non-BBQ chef and turn him into a pitmaster after one trip to Texas and less than a month working with the smoker.

Oh and shame on you for drinking water at a Trappist-related venue.

Aaron, I am deeply ashamed. You are wise to wait. With the student population so close, I do not see how they will be able to maintain the current prices. By the By we just signed up for your class in January. We hope you will add a segment in oath reciting.

Beer, smoked meat, co-eds in Daisy Dukes and yoga pants? Where do I sign up? Worth at least a try!