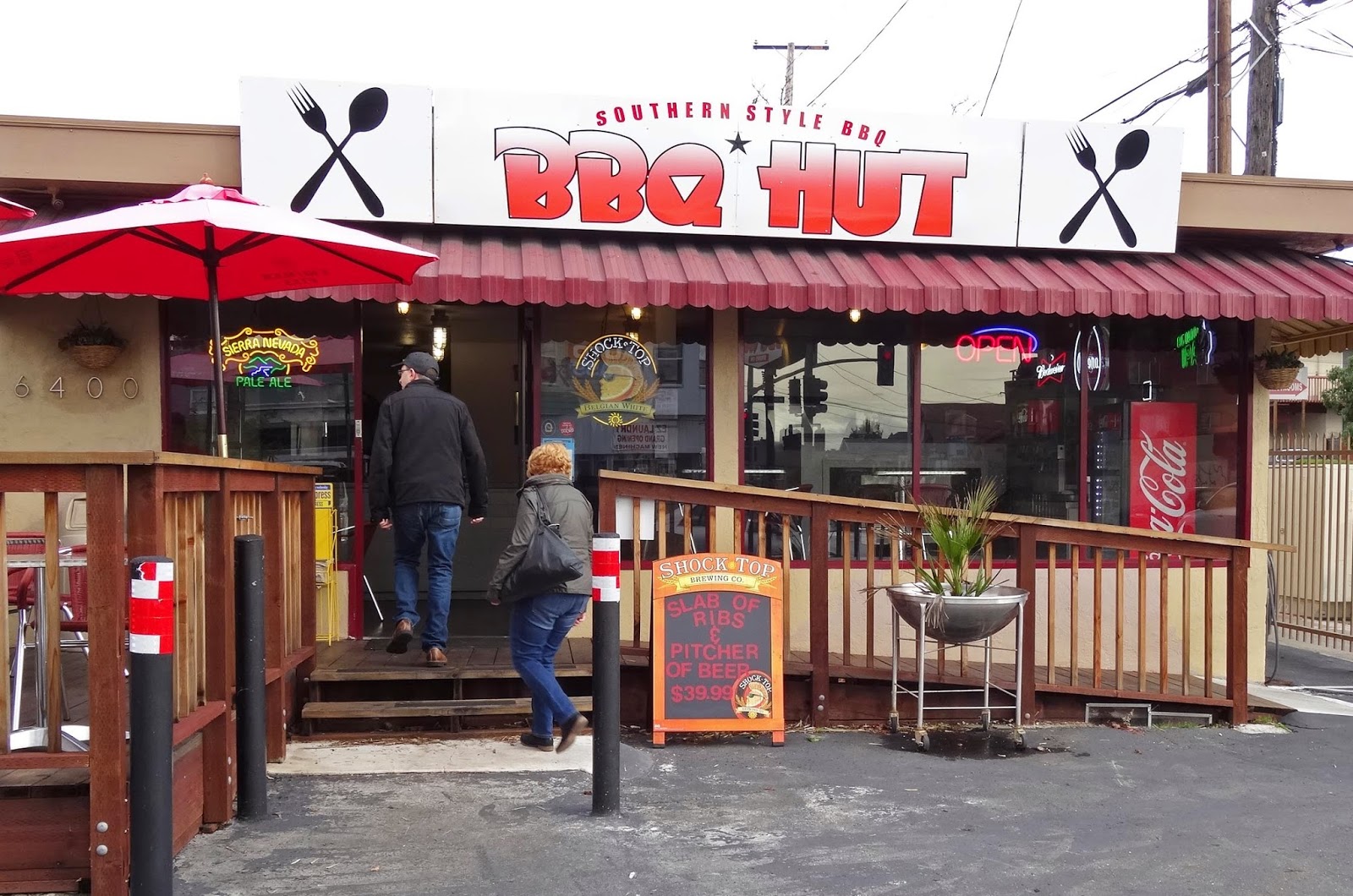 Sometimes what makes a great bbq restaurant is the sum of the whole package. We travel to Oakland, Ca. to sample the barbeque at the BBQ Hut. The BBQ Hut is located in a once gritty neighborhood at the Berkeley/Oakland borderline. It is housed in a remodeled old liquor store. I actually remember this liquor store from my long past youth. You could not help but remember it because it was like a fortress in its surroundings. The store was surrounded by iron gates. You would go into the store which only consisted of a window situated in very thick Plexiglas. Your liquor or sundry items were ordered through this window only. Times have changes as the neighborhood. The iron gates remain but now the BBQ Hut is a bright addition to this new evolving, part of town. 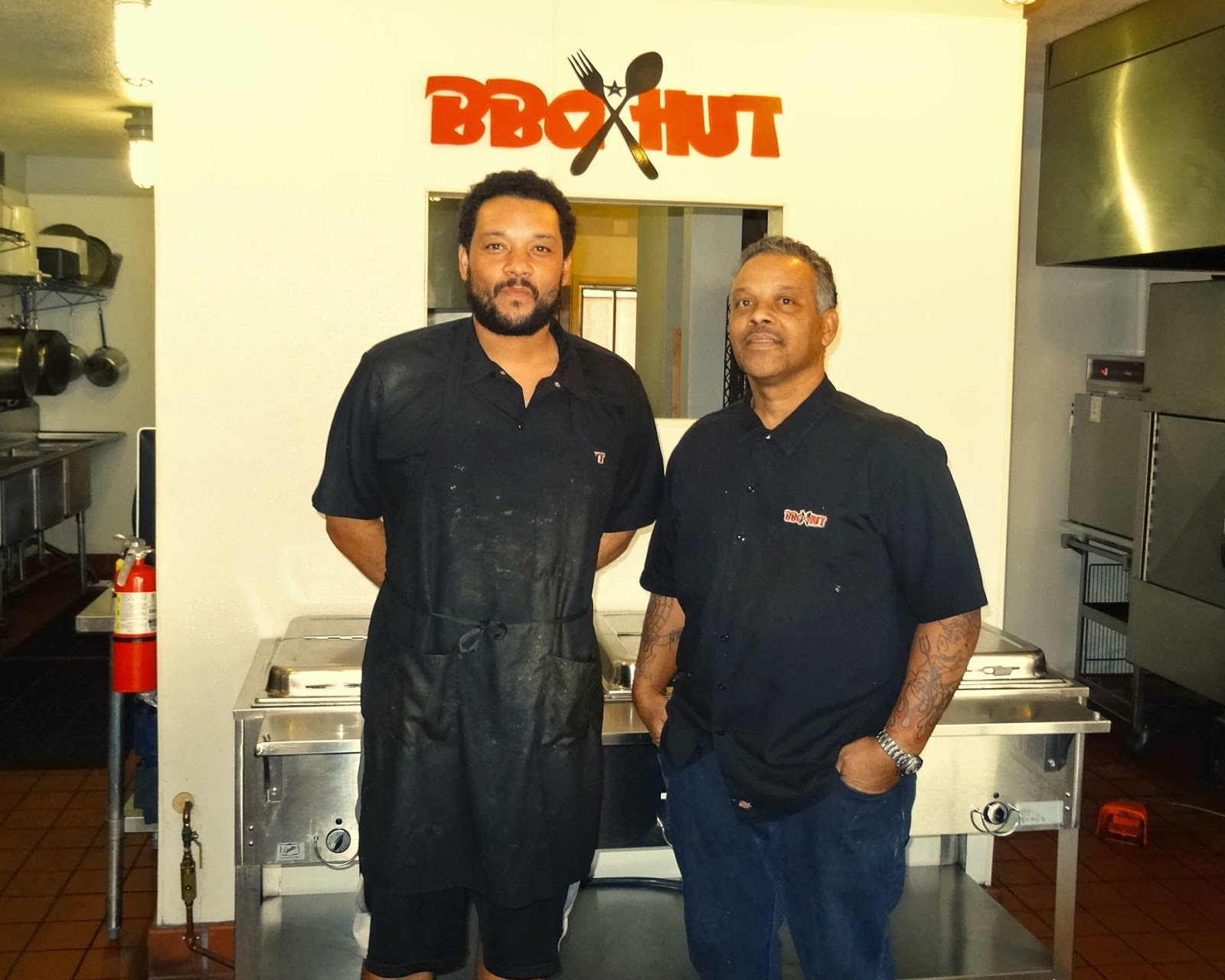 The outside is colorful with an outdoor table that was occupied by a local couple. They greeted me and told me to be prepared for some good ‘Q’. We talked about the  neighborhood and the they then recommended the ribs. I went inside to a bright clean order area. It was not dark and formidable as it past. One thing that made this place so welcoming was the owner Earl. He greeted me at the counter with a smile and warmth that made me want to like this place. He asked me if this was my first visit. I told him only when it was a liquor store. We started talking about the neighborhood and eventually got to the all important subject of bbq. Earl was very proud of his product. He gave me a rib to sample his house made sauces. I ordered ribs and brisket, my standard test dish of unfamiliar bbq joints.

Earl does not skimp on the meat proportions. The meats are served on the traditional slices of white bread. Baby back ribs are the ribs of choice at the bbq hut. They had a nice color produced by the seasoning rub. There was a faint aroma of smoke. These ribs were cooked to perfection. A bite was taken and a gentle tug pulled them away from the bone leaving my bite impression. Earl had two house made tomato based sauces. They were sweet with sugar and given a liquid smoke kiss. One had a hint of pepper but was in no way hot in my book. I wanted to love the brisket. It was chopped. It had smoke and beef flavor. Unfortunately it was tough and chewy. Oh my! The beans were very sweet. The potato salad had big chunks of potato in a creamy sauce. 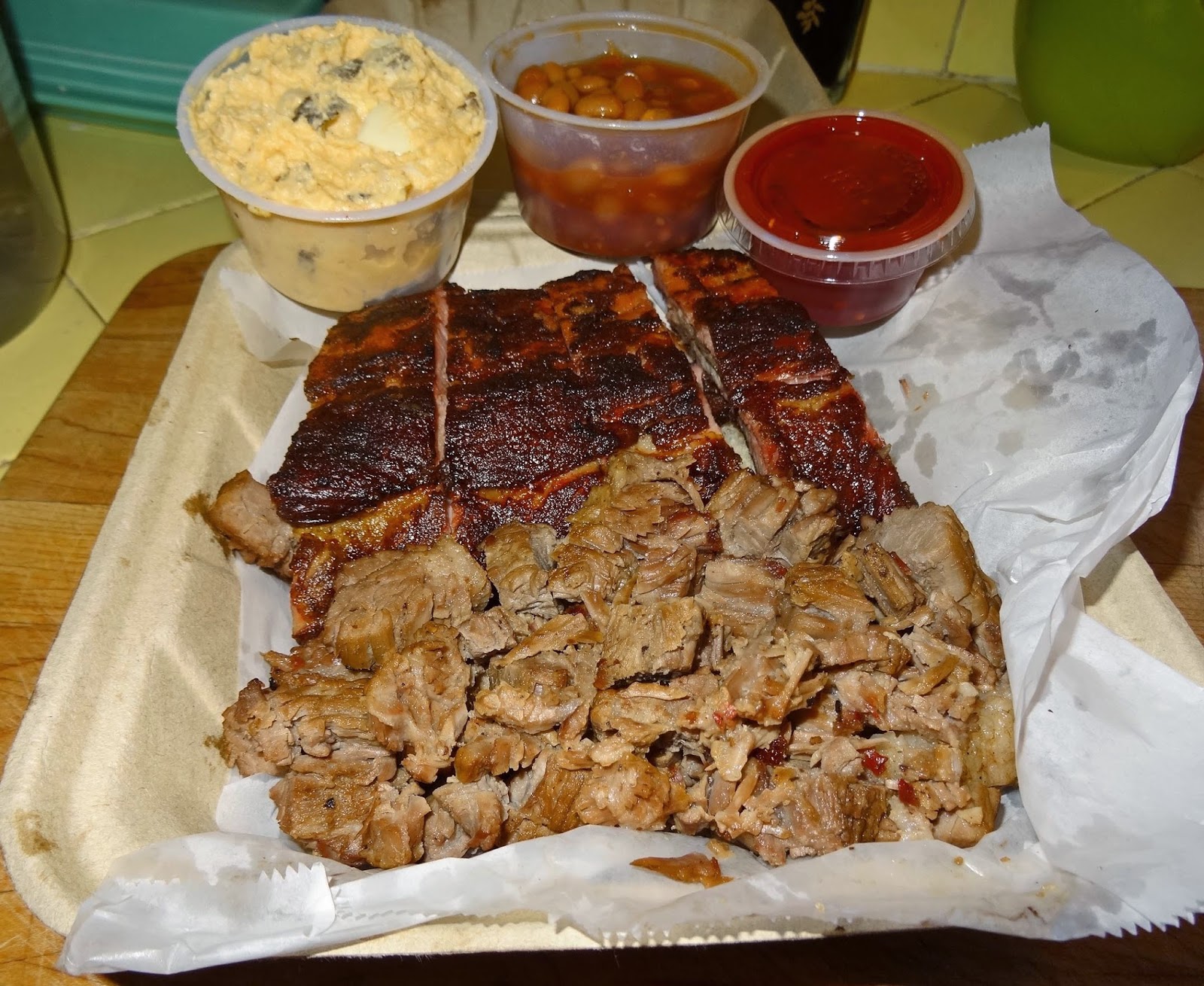 I asked Earl if I could take a photo. He said; “Sure, but wait, I want my son to be in the picture too”. There is a lot of pride and love at this establishment. I felt welcome and want to return. They sell several beers on tap. It would be nice to sit on the patio, eat, imbibe and watch the neighborhood walk by. There were some hits and misses in the food department. I would return for the ribs. The BBQ Hut is a local neighborhood gem.

You have to like it when new places spring up that help improve a neighborhood. Sounds like a nice place to kill some time on a summer afternoon. We have a couple of new places that are opening soon around here that I can't wait to try. A real deli! Exciting.

Three Dogs BBQ, I know I would be a regular if I lived by. Earl and Son have a nice place and I wish it success.

Big Dude,The right mix of ingredients for your dinning pleasure.

Greg, I have been thinking of nothing but prime rib latley. Ms.Goofy and I will be driving by your castle on the way to Willowside Meat Market this morning to pick up our holiday roast.