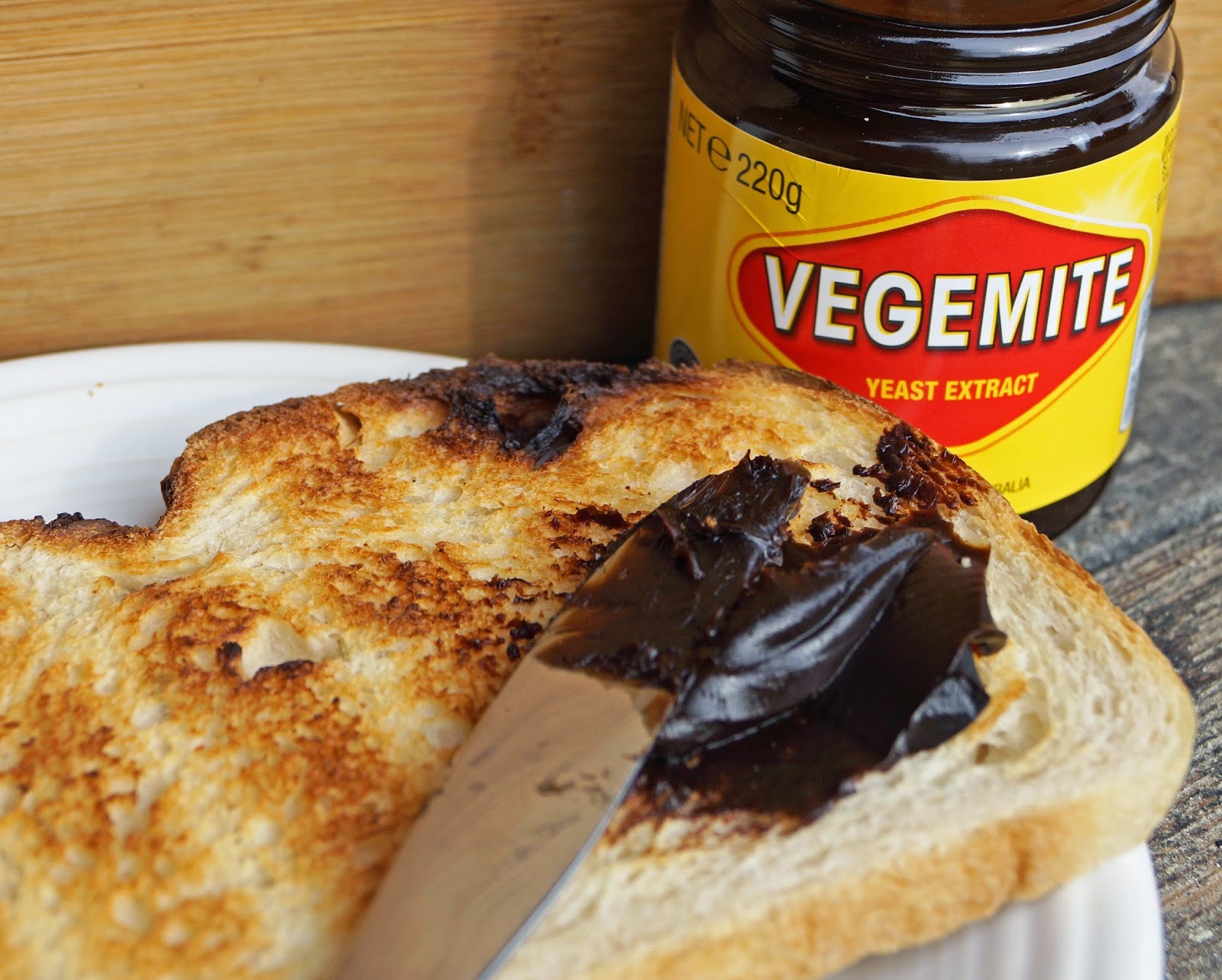 He Just Smiled and Gave Me a Vegemite Sandwich
and He Said,

Our inspiration today comes from Gusfacegrillah who is a meat genius and wordsmith from the great 'Land Down Under', He made a stuffed burger using a condiment that is foreign to me as his native home of Australia. This condiment is Vegemite. Vegemite is a food spread that is made of brewers yeast and barley malt extract. It is spread on toast and enjoyed by Australians (?). Today we are going to duplicate his burger that is stuffed with cheese and vegemite. This burger also has a crust that consists of ketchup and Vegemite. Our first step is to find some Vegemite. 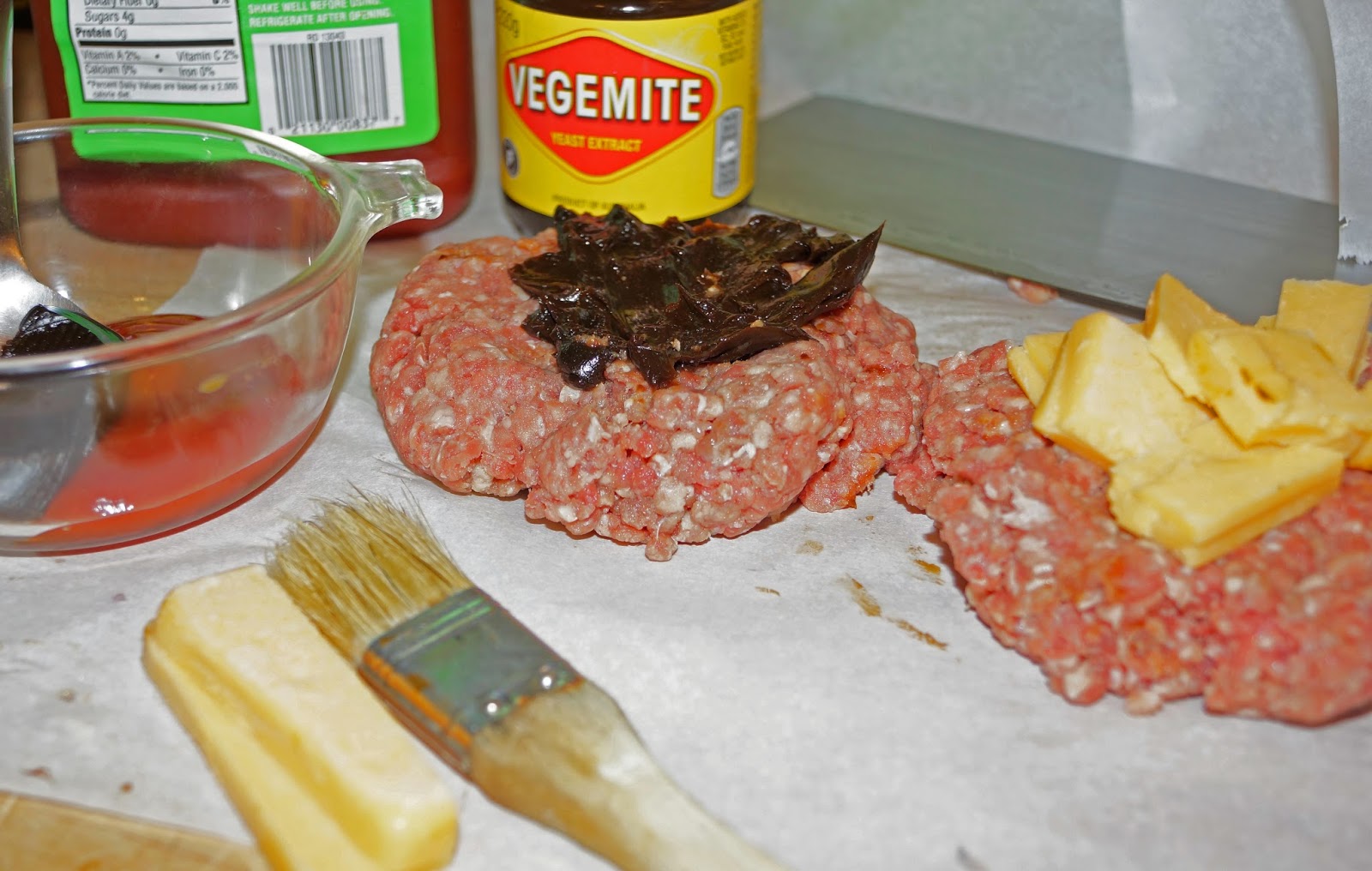 It was not terribly hard to find some Vegemite. The Berkeley Bowl West carried it in the incorrect 'British Section". The British like Vegemites distant cousin Marmite. Another story for a different day. When I was in the checkout line an Australian expatriate asked me; "Are you Vegemitrous, Mate?" I have no idea what that means so I just smiled and gave him a Vegemite sandwich. But seriously folks, what is Vegemite?

We are back home and the top was removed from this mystery condiment. 'Holy La Brea Tar Pit" this is a dark black gelatinous mass. The ingredients are; yeast extract, malt extract, salt, spices, coloring and various things that are warned; "Suitable for Vegetarians".Malty aromas escapes the open container. Of course a Vegemite sandwich was made. WOW what a salt bomb. This left me smacking my lips for a gulp of water. There also was a malty, mushroom kind of flavor that if I could get past the salt would want another bite. In a strange way I actually enjoyed it. This ingredient just might add that extras sensory flavor called umami. (Umami is a hipster term for you will be paying more for less and telling everybody how great it is and you do not get it). 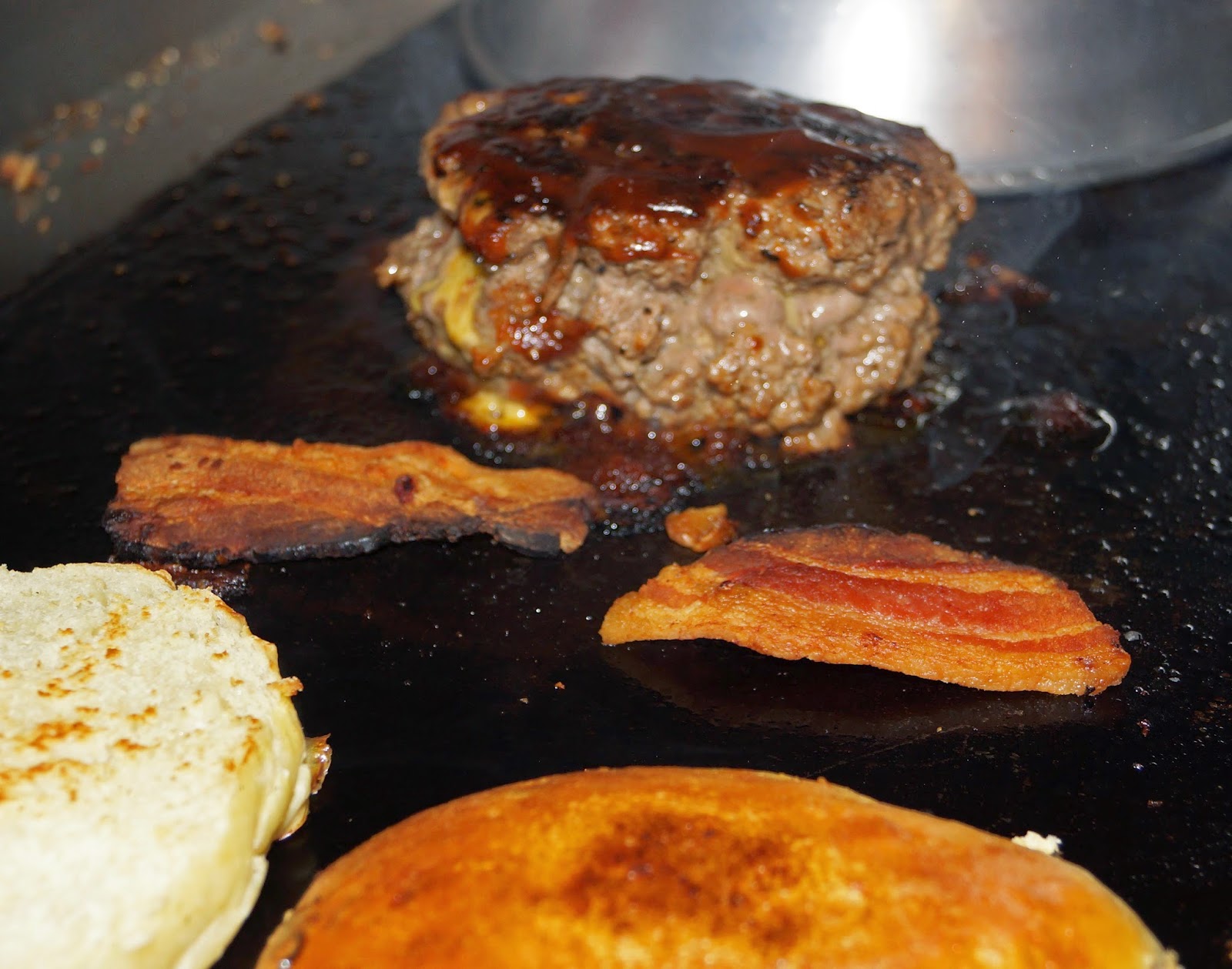 Burgers were formed with an interior layer of cheese and vegemite. As you can see this Mad Meat Genius did not skimp on the beef. A slurry of ketchup and vegemite was made to brush over our burger to form a crust. (I briefly heated the ketchup mixture in the microwave to help combine ingredients). Today's burgers were cooked on the flat top inside. I would of preferred to grill them outside but we are hunkered down for an impending rain storm. Even though the smoke alarms were screaming the house smelled wonderful. The ketchup/Vegemite mixture formed a meat crust that was spectacular. 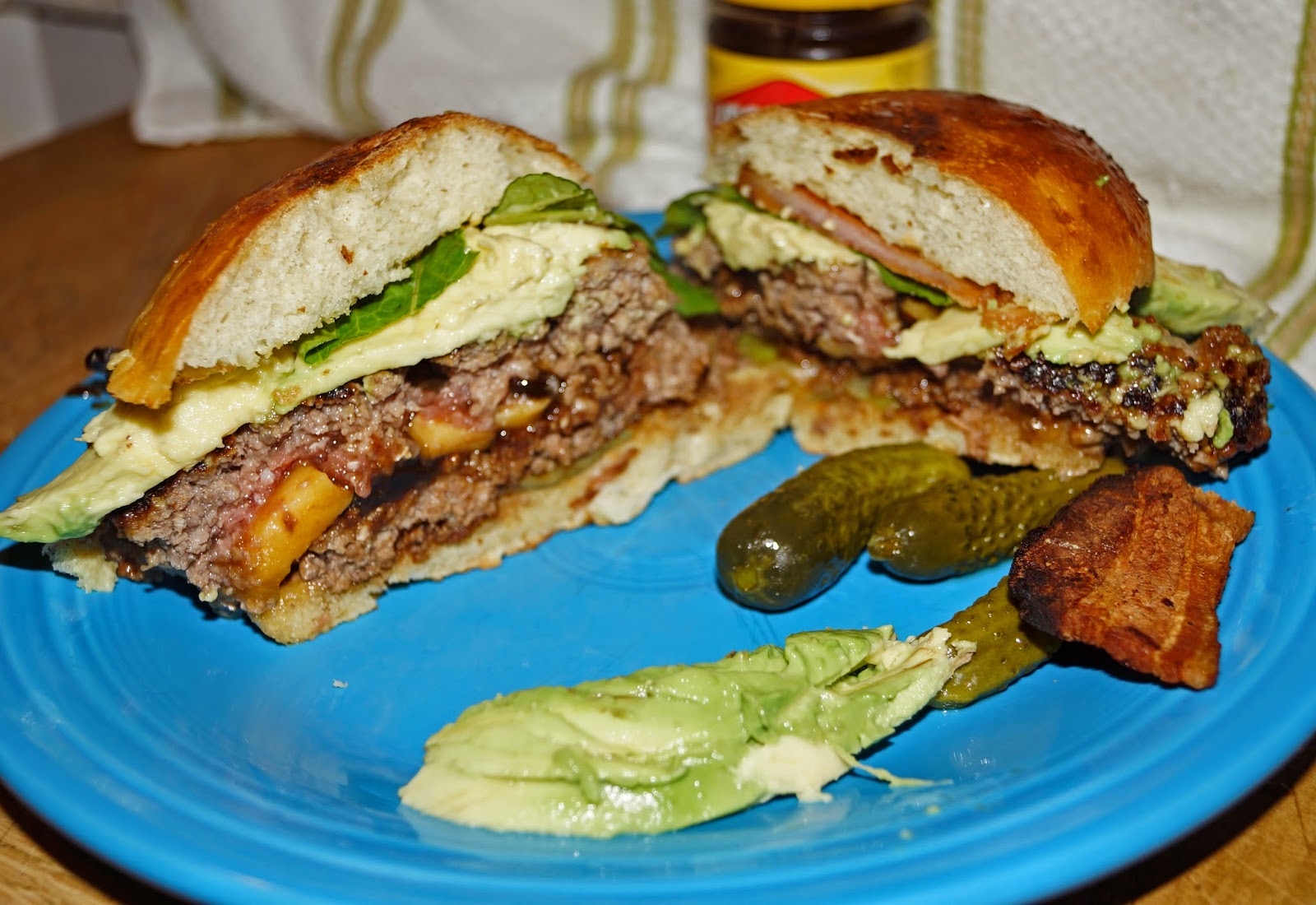 We served our burgers on some home made potato rolls with pickles, avocado and Berkshire bacon as accompaniments. The verdict? This was a messy, sloppy, salty most ultimate burger ever. The center of the burger had warm gooey cheese with a flavor enhanced by the Vegemite that had you craving the next bite. The exterior meat crust was the most ultimate flavor boost. This ketchup/ Vegemite slurry ccaramelized to form my new go to technique. If there was any fault in this ultimate burger was the hit of saltiness. I did season the burger meat which will not happen again. I dug this burger. I have plans to use Vegemite as a future flavor ingredient. It does add an extra boost of yumminess that has you craving more.Thanks Gusfacegrillah. The link to his original recipe is below.

Posted by Chilebrown at 7:04 AM

I applaud your bravery. I think I've heard of Vegemite but never experienced it - I think the name alone would keep me away. As I was reading your post, I was expecting a negative report so I'm surprised it turned out so well - now I may have to try it.

Well I guess I'll have to "give it a go, eh?" Glad you took one for the team. Trusting your judgement and taste I shall brave the down under...

Good on ya, Mate!

Mr. Brown you have outdone your self with this post. I am so impressed you managed to enlighten me to the uses of vegemite. A product I knew existed because of my fascination with Australian TV but now I am very confused why anyone would put it on toast in the morning after you describe it. Mr. Brown you went further by trashing hipsters the great discovers of bacon, pizza, coffee and everything good to eat. You also referenced a obscure song from a forgotten band which reminded of great evening at the greek seeing a forgotten band with a woman I wish was still in my life. GWH. Sorry I just can't help my self, Japanese dried persimmons what the hell, do I have to reminded you that this blog is about meat. I just can't be nice to you very long. GWH OUT!

Vegemitrous, he snickered. Things that sound dirty, but really aren't... I wonder how this would work in a pork butt injection for umami? GWH, you never fail to crack me up. Have you considered a weekly column of your insights? I would be a loyal reader.

Big Dude, My only experience with Vegemite was hearing it in a song. I am glad I gave it a try.

Toons, You might as well because you only live once or twice if you have heartburn.

greatwhite hunter, Thanks and if you read my mission statement you will see that I throw in a couple of vegetables once in a while. If I search Google images under Hipsters your mug comes up.

Three Dogs BBQ, please do not encourage the greatwhite hunter. I think this would be great in an injection. I am going to try it on a roast next.

Ok Mr. Brown vegetables are mentioned but nothing about fruits GWH

greatwhite hunter, Have you ever considered writing a weekly column of your insights? I would be the first person to subscribe and then complain to the editor about the nonsensical, eccentric ramblings of a slightly deranged man that may or may not be somebody's creep uncle. And another thing, will your new bicycle have a rear back up camera with an app that give you directions to the nearest hippest coffee shop?

Mr. Brown I am ok with being the Howard Stern of blogosphere where just as many people would read my ramblings who loved me as hated me. Howard got very rich that way. Mr. Brown I now would like to address your consent accusations that I am a hipster. I only drink coffee at the most four times a month and most of the time at home. Who is it that we know that is at starbucks or peets coffee every day no matter what he is doing. This individual must get coffee as he goes shopping, biking, to play tennis, meat adventures, walking the dog, also this person we know doesn't own a coffee pot as far as know. I believe you should take a long hard look at your self Mr. Brown you with a doubt are a hipster. I believe you need to learn to love your self and come out of the closet and stop trying to make me into hipster. I believe what you are trying to do what is called transference, please just learn to except your true nature. I now would like to address your advice about a backup camera on my Bike. I never plan on riding backwards so I don't need one, a wide load sign maybe. GWH OUT

greatwhite hunter, In reply to your lengthy and thorough diatribe about being in a closet: Did I or did I not (as Ms. Goofy is my witness) see you shopping for hipster leotards slash tights for lounging at the local java dispensary when we delivered your very politically correct,free range,happy, organic, (probably had tats) Thanksgiving fowl?

Awesome, glad you tried and enjoyed it, Chilebrown!

I think it would work well for an injection... I used a little bit when I did my vegemite lamb (http://gusfacegrillah.com/2014/11/08/vegemite-lamb/)

I would have been disappointed if your post did not include that Men At Work lyric.

Speaking of Umami, I read something the other day that pandas are vegetarian despite being fully equipped to be omnivorous because they lack the receptors for umami. Evolution is a cruel mistress...no wonder they are almost extinct, they need to meat up.

gusfacegrillah, Thanks for the inspiration. I am going to use the Vegemite on a roast next.

Chris, I am going to eat a panda.

What wood would you use for smoking Panda?