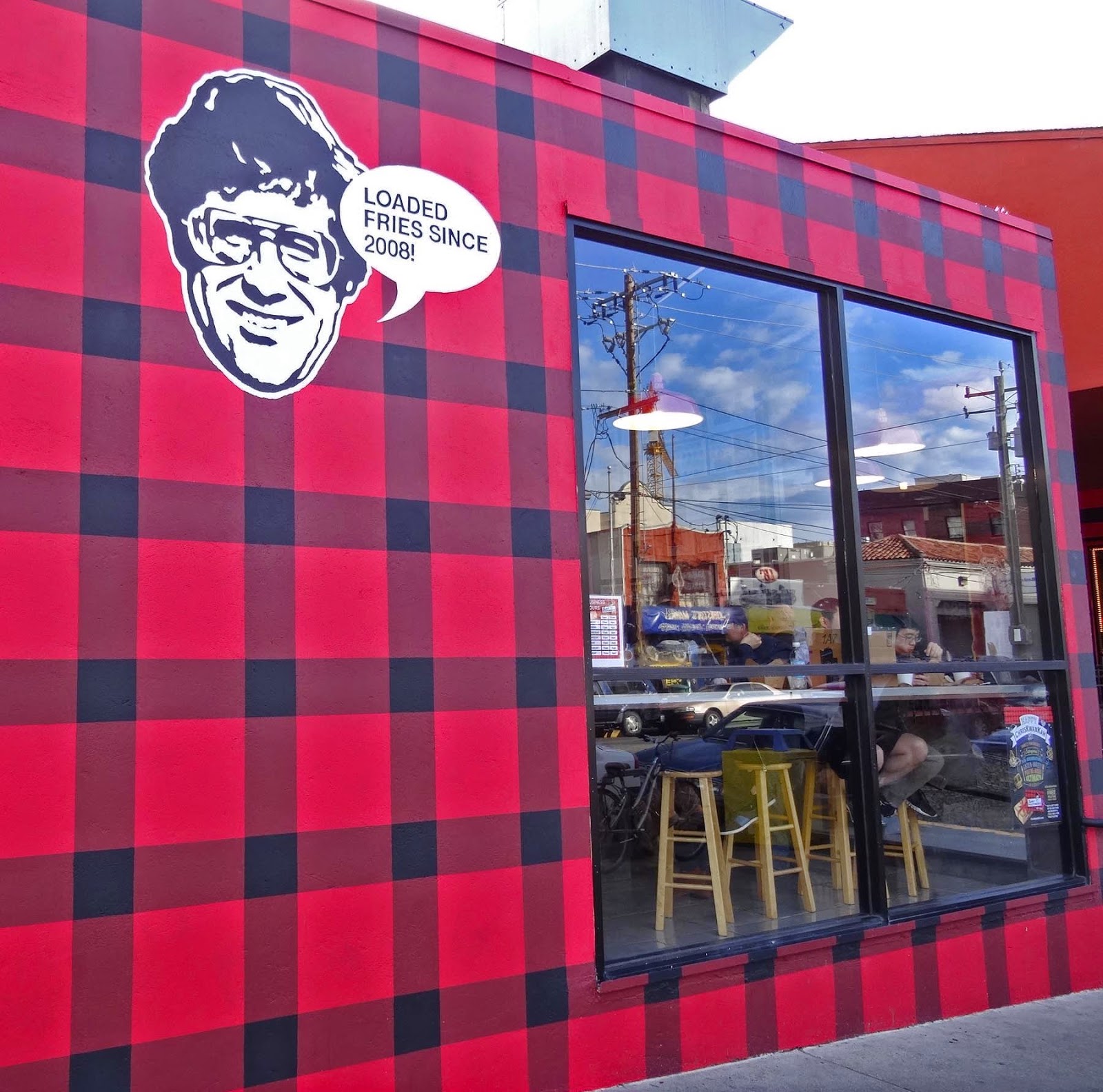 French fries, cheese curds and gravy sounds like some of my favorite food groups. North of the border, Quebec in particular they are combined and given a fancy title called Poutine. This so-called Quebec classic has been getting a lot of publicity lately. In Berkeley, California, ‘Smoke’s Poutinerie’ is a new chain restaurant to open in this non-hipster but possibly aging hippy college town once known as the birthplace of the ‘Free Speech Movement”. We will be visiting Smoke’s Poutinerie for strictly academic purposes to see what all the hub bub is about. 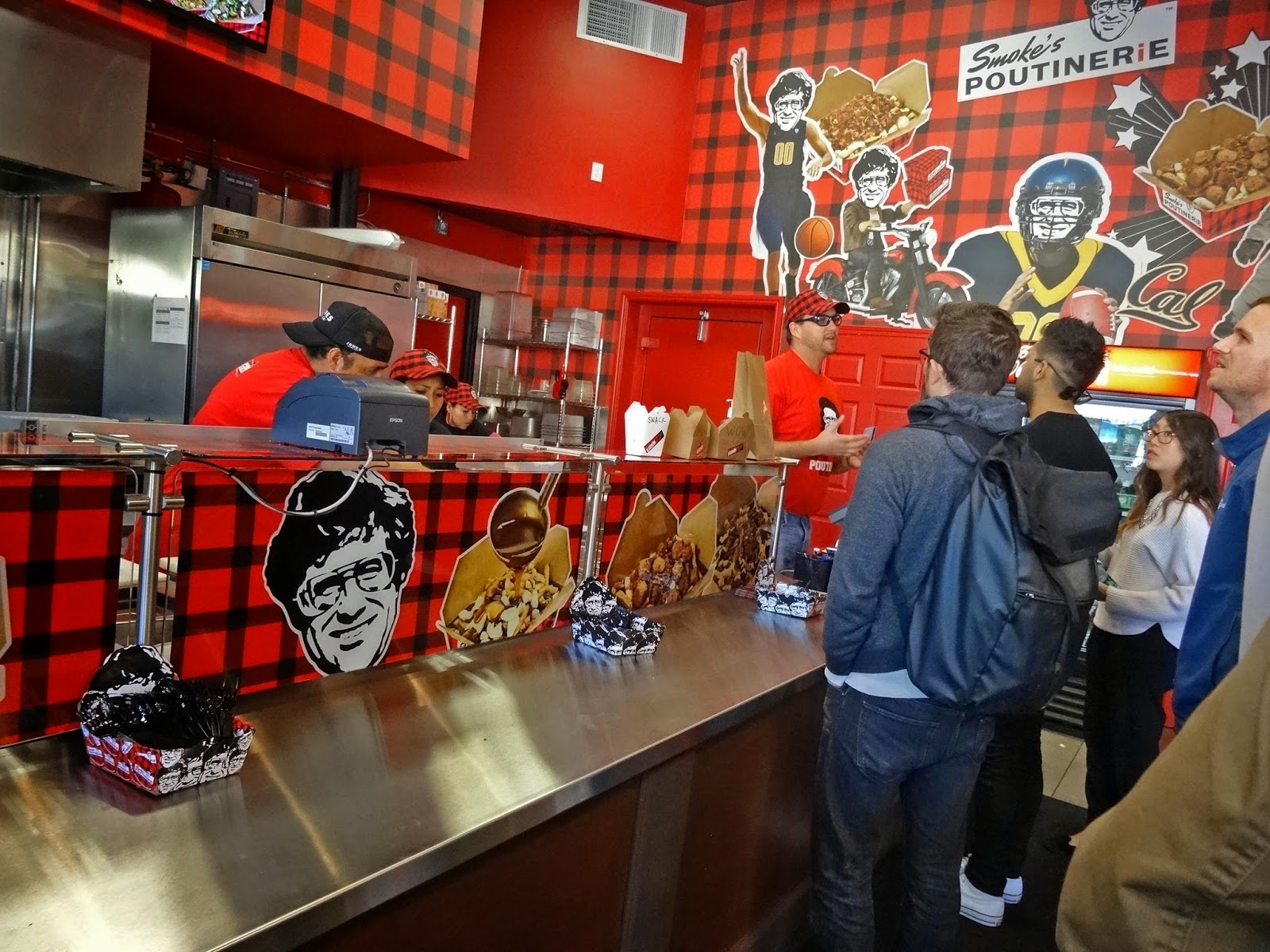 Smokes Poutinerie is located one block off of Telegraph and a stones throw away from the infamous ‘Peoples Park”. This neighborhood is full of restaurants, record stores, head shops, and clothing stores all catering to the college crowd. Smoke’s Poutinerie is a very small shop sandwiched right smack in the middle of all the action. The streets are crowded and so is Smokes. There are no tables but several counters to stand and eat your poutine meal. Smokes offers the traditional poutine of fries, curds and gravy, but also has numerous other toppings to add. Some of these toppings are chicken, pork, beef, and even an all vegetable combination. The prices are low for the college crowd. I found a “Triple Pork” topping which consists of bacon. sausage and pulled pork. The order was placed and almost immediately my number was called to retrieve my meal. 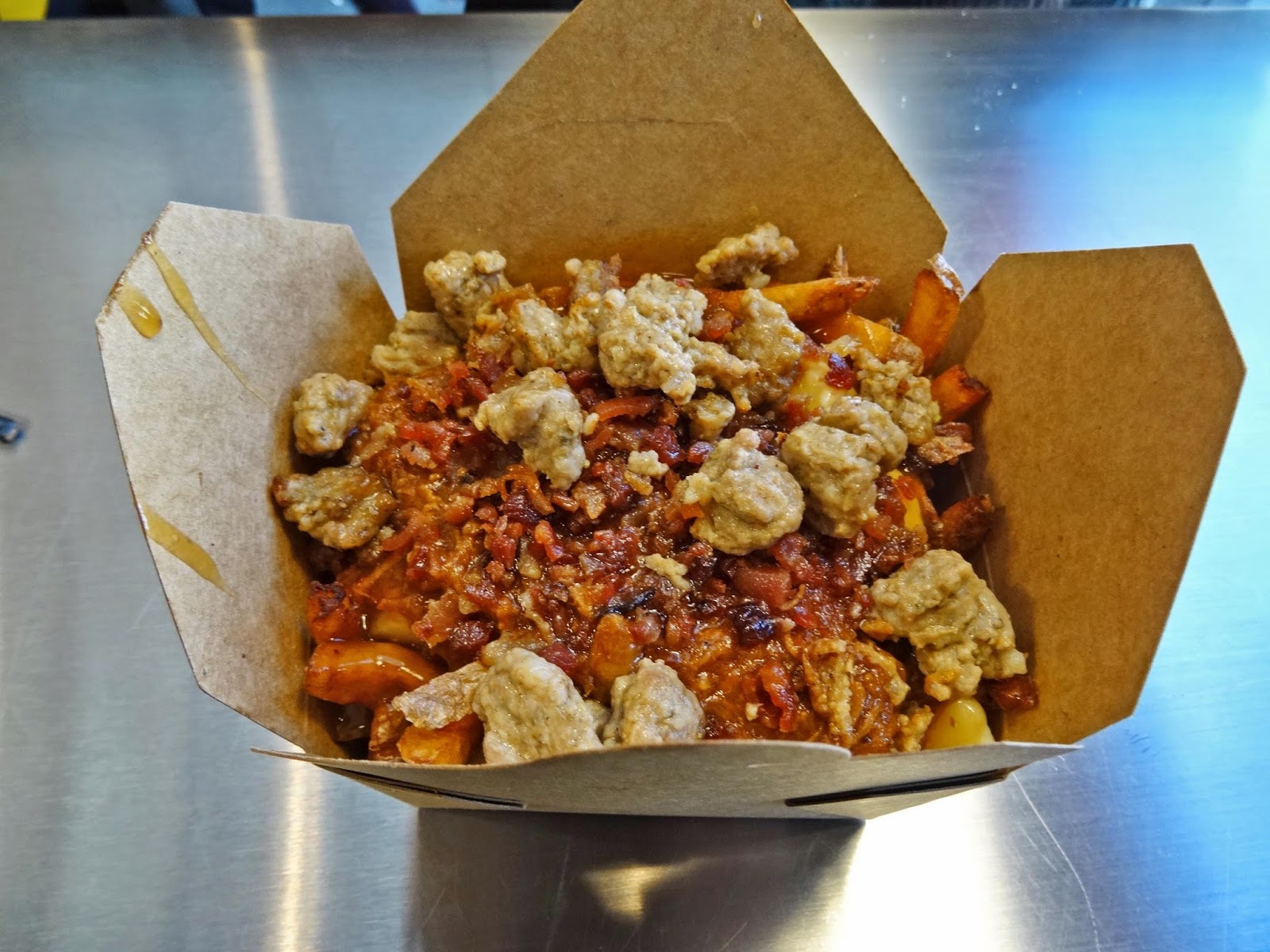 Your order comes in a Chinese style take out box. It is full to the brim of fries and your toppings. I squeezed into a small spot at the counter and dug in. This was an exercise in calorie overload. This Mad Meat Genius has an appetite that can challenge any trencherman and I was put to the test. The fries were hot and fresh. They were drenched in pulled pork with a sweet barbeque sauce. The word sweet needs to be emphasized. The sausage was plentiful and tasty. I could see bacon pieces but the flavor was overshadowed by sweet bbq sauce. The cheese curds added mostly a texture component. They also added to the overall bulking up of this filling caloric bomb of a meal. 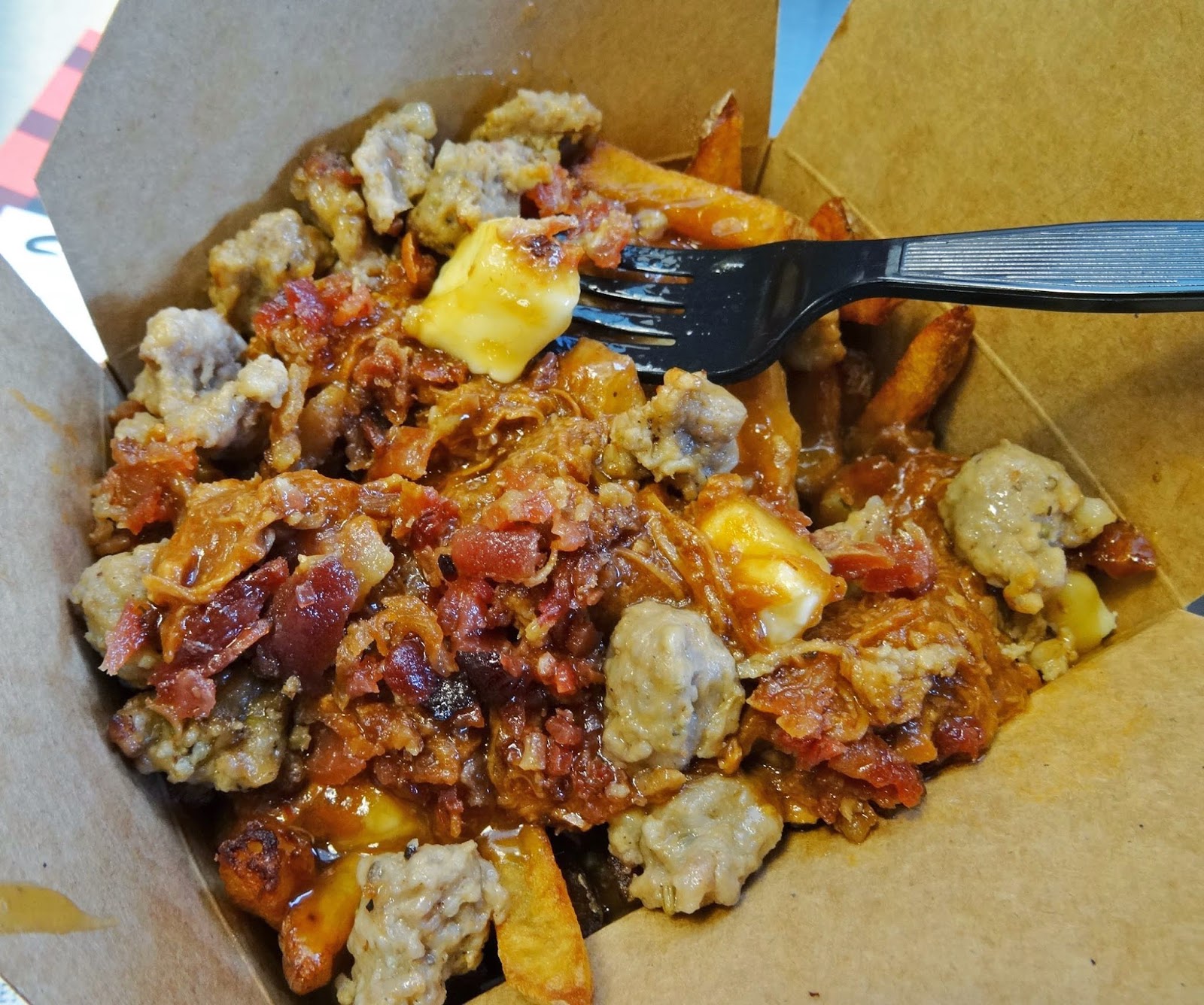 Smokes Poutinerie has all the right move to be a success. They are located in a bustling student area. The prices are very reasonable. This was a very filling meal. The food was more than generously proportioned. The flavors were decent. There is a combination on the menu for everyone. I wanted to try some Poutine. I did. It really was not something I would come back for. If I ever was a starving college student again and it was late at night, then by all means Smokes Poutinerie would be my go to spot. Do old hippies turn into new hipsters?

I'd never heard of Poutine, but something made of fries, gravy and cheese curds has got to be good. I'm off to do a little research.

Big Dude, I have only read about Poutine and heard jokes about it on the late night talk shows. I had to check it out. It is what it is.

Mr. Brown, I believe that you do not have the ability to recognize a hipster.[first young man in line in your second picture is a hipster. You didn't notice he is wearing his girlfriend`s skinny pants!!!] I am getting off the subject. I thought traditional poutine had fries, turkey gravy, cheese curd, peas and a slice of turkey? I went to smoke's poutinorie website and no turkey on the menu. Wikipedia here I come. GWH Out

greatwhite hunter, I am not sure what part of Canada you are talking about. To find the missing turkey please find a shiny object that reflects. Most college students are skinny hence the jeans. And I am not in the habit of looking at men and what jeans they are wearing.
Are you free Tuesday for more verbal sparring and a meat adventure to pick up the prime rib?

I must check this out! I love fries topped with stuff, but like nachos, I don't like a mountain of goop that makes a big soggy mess...

the traditional one on the menu sounds like a winner to me. It should come with a side of Lipitor :)

Mr. Brown I am very interested in going to the meat holy ground outside of Santa Rosa. I just don't know if I will be able to. I will try to be back in time. I would like to go the turkey place for a double helping of stuffing and turkey smothered in gravy are you up for that? I will say at this time it is a definite maybe. Are you call me a turkey? All have to say is game on, Mr. Off ramp!! hee hee GWH out

Sandy Waddle, The ingredients were fresh and probably would become a soggy mess. That will not happen if you use my tried and true method of inhaling food. I think you will enjoy it. Go for it.

Greg, I feel a little cheated ordering the three way and not getting to try the gravy. You know its all about the gravy mang.

greatwhite hunter, I believe the reference to Mr. Off Ramp is only known by a few people. You got me.

As you know Chilebrown, the brisket poutine I had in Montreal was heavenly. Poutine should be simple: crisp fries, cheese curd, meat, gravy. Your sounded like the combo lo mein at the local Chinese joint. Also, it is best shared due to portion size and to combat soggy fries. To close, I am starting to think you are a Hipster wannabe since you seem to end up in Dens of Hipsterness. Just sayin...

Three Dogs BBQ, Have you been talking to the greatwhite hunter? I though Wannabe was a town near Montreal.

Mr. Brown you know I something only say thing only to amuse my self and the less people that know what I am talking only makes it funnier to me especially if about you. GWH