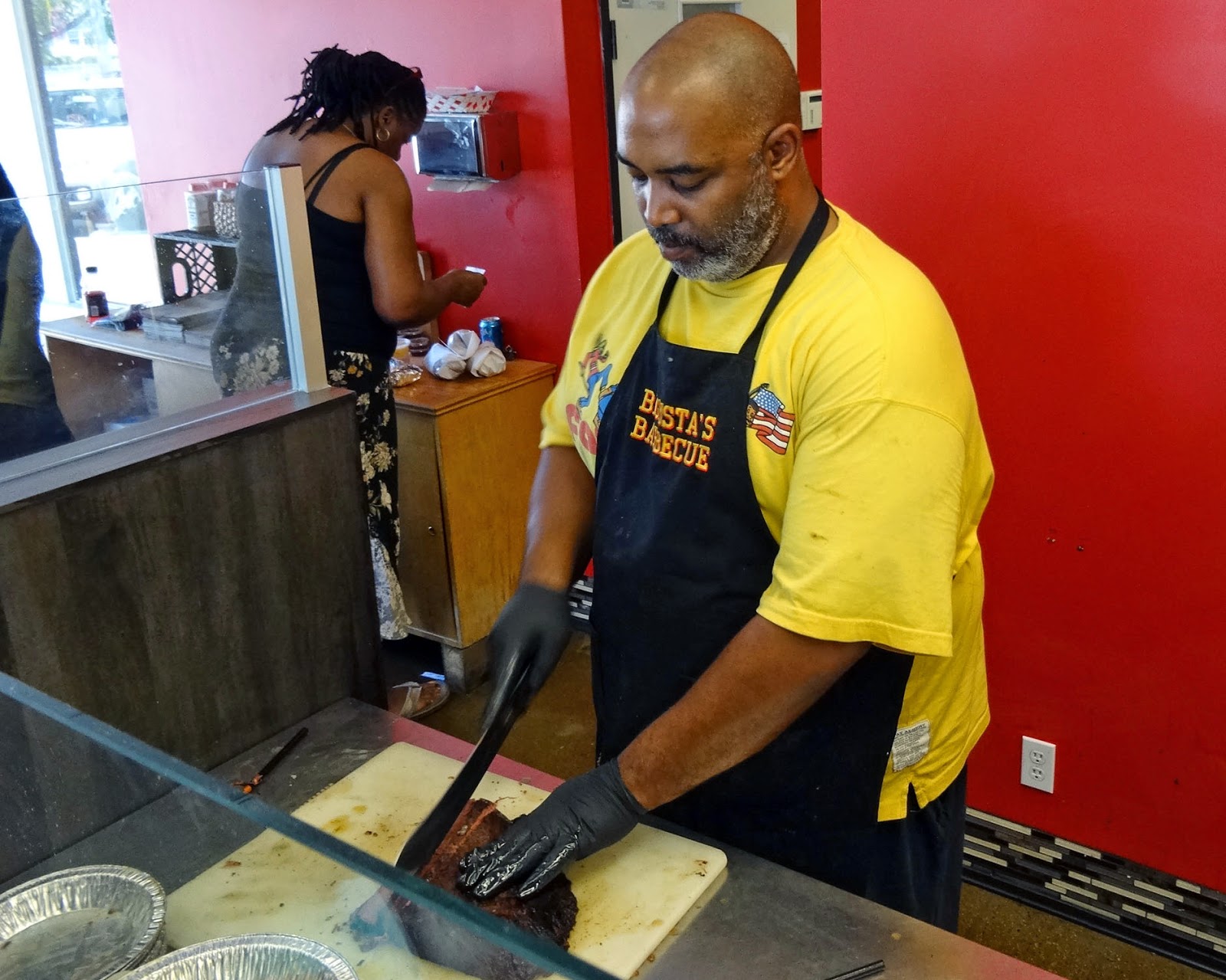 As a rule, I do not venture to Southern California very often. There has always been a rival between the north and south. It is a feeling that is hard to put into so many words; traffic, politics, sports teams, water rights and attitude.Southern California was unavoidable, so I made the best of it by visiting Bigmista's Barbecue & Sammich Shop.. I will spare you the traveling details but picture seven lanes of bumper to bumper traffic on a early Saturday afternoon. 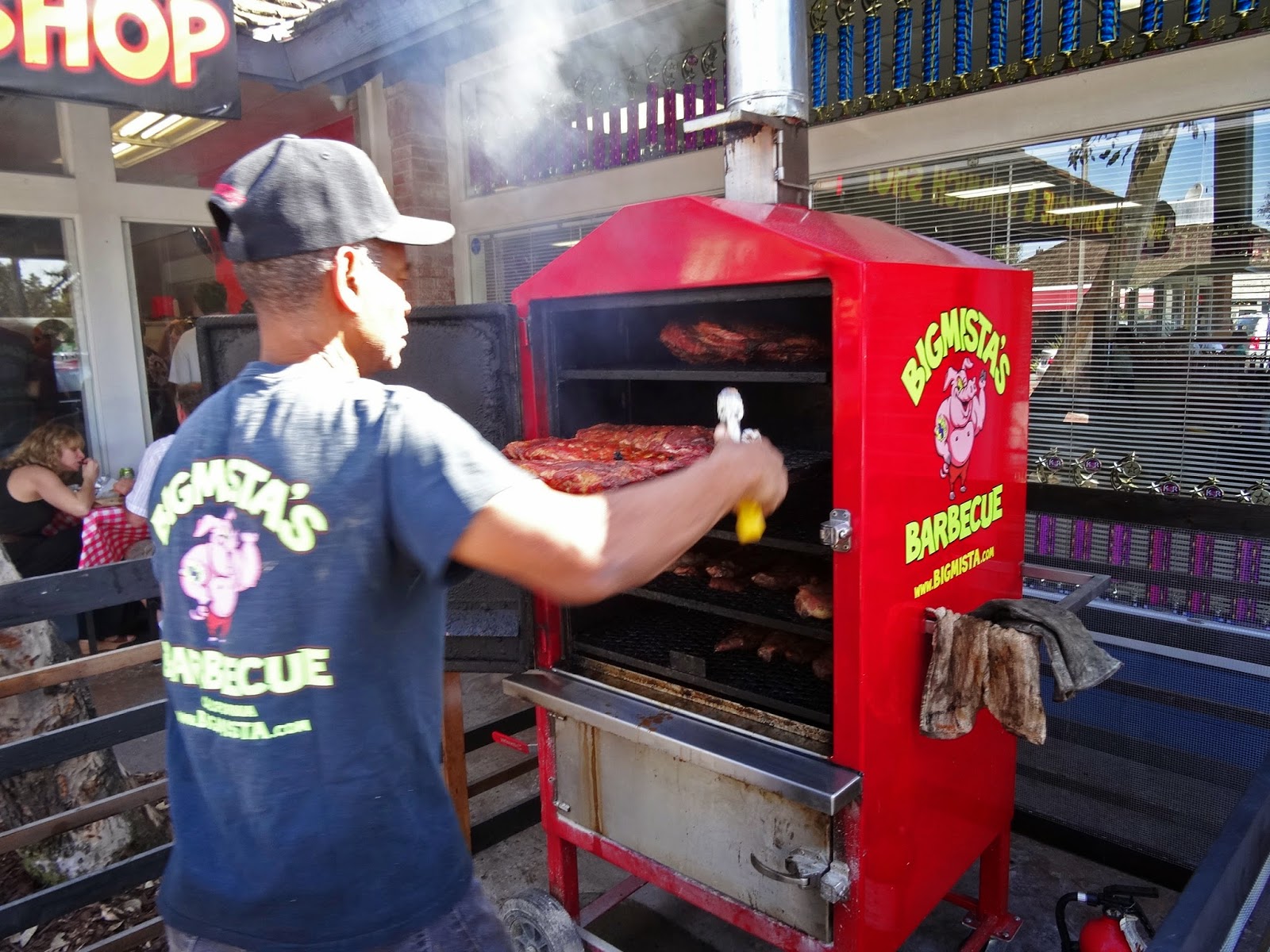 Bigmista's is located in a small strip mall in Long Beach. I know I had arrived by the smoker out front and the line out the door. There must be something good going on inside with a crowd like this. I took my place in line. Once inside the door the line snaked through the small shop. There were some bench seating but everybody seemed to get their order to go. Right up front, bigger than life was Neil Strawder the owner and celebrity head cook. He was slicing and dicing meats to order on the other side of a Plexiglas window. He was slicing brisket that looked fantastic. The Plexiglas was fogged from all the customers drooling and breathing hard at this meat display. 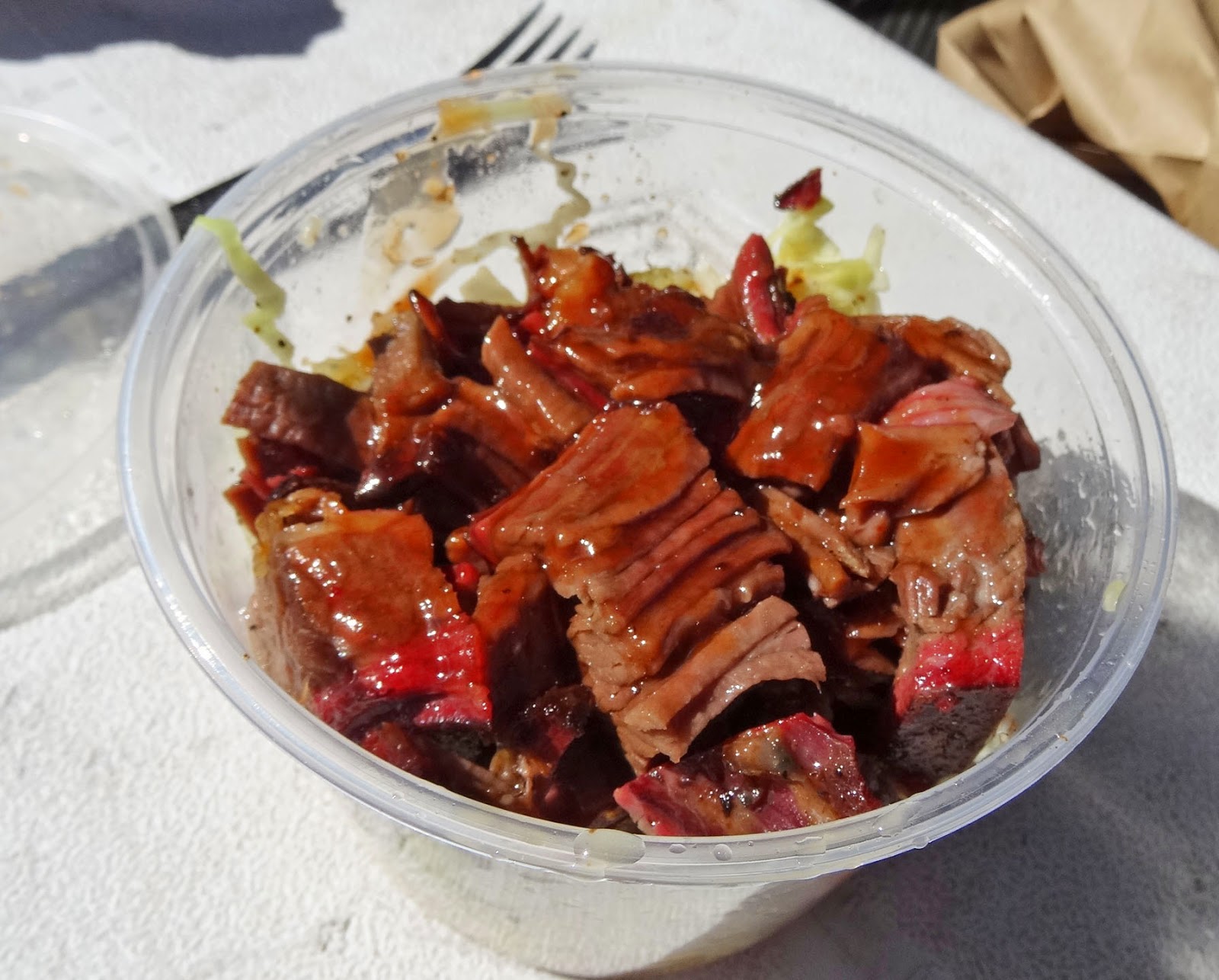 I was getting close to the front of the line and had a chance to introduce myself to Neil. We had a lot of mutual friends in the bbq world. Neil has been on the television show BBQ Pittmasters He is well respected and a force to be reckoned with in bbq competition. He handed me a sample of brisket over the glass teasing  everyone one else in line. Tasting that sample of brisket made my journey worthwhile. It was my time to order. They were out of ribs understandably with the crowds. I did order a 'bowl' which consisted of a choice of meat and a side. I had to have some more brisket.
The brisket had a beautiful smoke ring and deep rich beef flavor to match. It was very tender. This would of scored high in any bbq competition. I had the brisket over some very tasty Cole slaw. I also had the best moist cake like corn bread too. The little food that I did have was phenomenal. I can understand the lines now. Southern California does have a bright spot and it is here at Bigmista's Barbecue.

Bigmistah's Barbeque
Posted by Chilebrown at 12:00 AM

I always thought a bigmista was Italian fog! Brisket me please!

When I do actually venture south, it's to the Long Beach area. Going to have to remember this place.

That's quite the audition reel! I'd hire him on the spot! In fact, I may have to go down to LA just to try his BBQ! In the meantime, where would you go locally that has BBQ as good?

Greg, Thatsa funny. I want some more brisket too.

Dagny. I hate to admit it but we are going to La-La land again this weekend for another bbq competition.

Zoomie, Your last question is a good question. I can suggest you read old posts or stay tuned. All bbq restaurants have the potential to be great.

Bigmista's is on my list to try too, just a bit of a haul from here. Forgot about that audition tape, hilarious. His other one was great too, the one he did interviewing himself like Actors Studio.