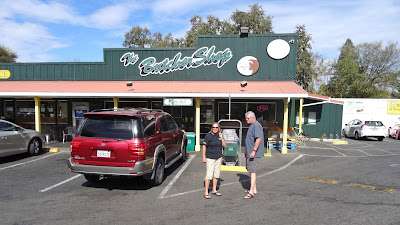 This Meat Adventure brings us back to Chico California. We meet up with bbq competitor, certified KCBS judge and friend John Chips. John Chips is head honcho of the competitive bbq team; ‘Drunk Uncles’ (Ruining family gatherings for over 20 years). John is not afraid to wear a man kilt and he wears it well. He did not wear his kilt today but he was gracious enough to chauffer us around Chico on our Meat Adventure.. We knew we were in for a wild ride by the mascot on John’s dashboard. 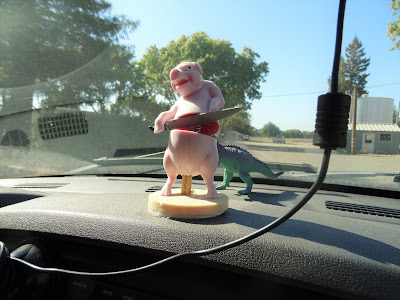 One of our stops was The Butcher Shop which is part of the market; ‘S & S Produce & Natural Foods”. At one time the Butcher Shop was a separate business but in 1997 a wall was broken down and the two merged. The Butcher Shop prides itself in being a full service butcher catering to customer’s needs.  The emphasis is in local and natural meat. No hormones or antibiotics will be found in this shop. A 16 foot refrigerated case is devoted to nothing but fresh seafood. Local pork from Llano Seco is featured at this shop. Chicken and pork sausages are house made. So many choices, so little room in the portable ice cave. (ice chest). 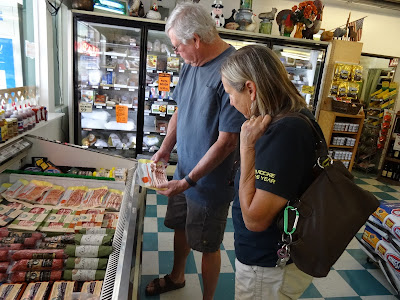 Sausages, stuffed pork chops and uncured bacon were added to our shopping cart. I will spare you my rant on the uncured bacon until a later date. The Butcher Shop is a great place for Chico locals to one shop stop for a ‘Natural Food’ and meat meal. We made some other stops in town and had a great lunch. John was a great host and tour guide. We always look forward to seeing him at competitions. Let’s go cook some stuffed pork chops. 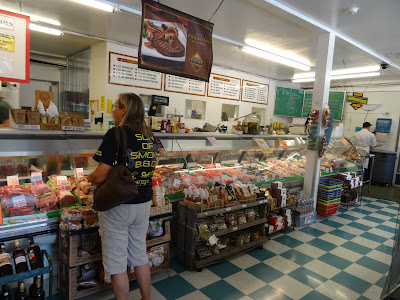 The stuffing is of seasoned bread and chopped vegetables. These chops were huge. They were dusted with our rub of the day and brought to room temperature. A medium hot direct heat charcoal fire was built. The grates were oiled. A cast iron pan was lined with several slices of bacon. This would act as a sort of trivet later. The chops were seared on both sides. They were gently placed into the bacon lined black iron pan. The pan was place directly in the middle of the grill and the lid was place to cover. Thirty minutes until the internal temperature hit the 140 mark and the chops were removed.
I have died and gone to Stuffed Pork Chop Heaven. One eats with their eyes first and we had a feast. They were gorgeously mahogany brown. The stuffing had crispy edges. We also had the added bonus of crisped bacon underneath the chops. This was comfort food to the max. The stuffing was like a warm hug. Filling and satisfying, who could ask for more?  Thanks John this was only a part of a great Meat Adventure. 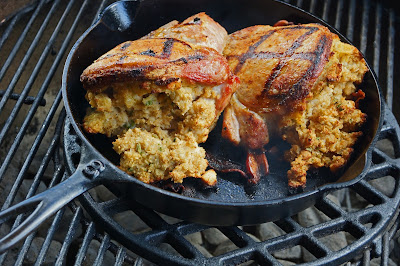 Sort of a oven in the middle of the grill. May be borrowing this idea :)

I have to say those chops were really stuffed.

Greg, We use our Weber as an oven a lot. If you bank the coals on two sides, put a drip pan in the center and count the coals you can actually control the temperature. The Weber design actually is more efficient than your home oven and has convection type of heat. We bake outside on hot days the few that we have.