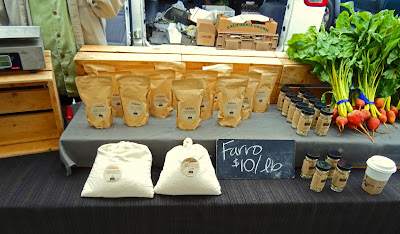 Here is a new/old grain we found at the Marin Farmers market.  ‘Canvas Ranch’ located in Sonoma county grows this whole wheat grain. We were in the mood for something different and this fit the bill. Farro is popular in Italian cuisine and can be used in soups, salads or served by itself. Farro looks similar to barley and has like cooking properties. This will be a Mad Meat Genius first. 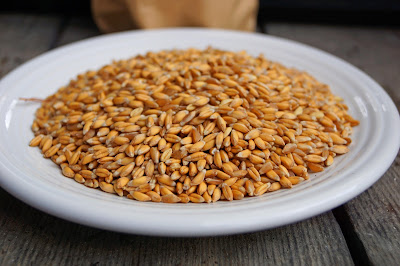 With no farro cooking experience, we turned to the World Wide Internet for our instruction. Most advice was to just boil the heck out of it. That works for us. The ratio of farro to water was two to one. We added a touch of salt and put it on the burner. An hour passed at a slow simmer and the majority of the water had been absorbed by the grain. The grains were still separate and not starchy like rice. We served this with some barbequed chicken. The first thing you will notice about farro is the texture. Even though it had been cooked for an hour it still has a chew to the bite. Let’s just say munching on a forkful of farro was a little different in the texture department. It was not unpleasant. The flavor was a little nutty that I would compare to a brown rice. We ate this by itself as a side dish for our chicken. I think that this would be much better suited for a soup or salad as a back-up texture and flavor. Farro is  not something I am going to rush out and purchase again but I did have fun experiencing a new/old heirloom grain.

Mr.brown, I think you have gone too Farro, as I did on Monday. Iron Horse today. GWH coastin on dude.

I thought this post was going to be about the old western card game.

Don't care for farronas a stand alone side. But, in a soup such as pasta fagoli, heaven. Just cook it in water separately and add so it doesn't mess up your broth to goodie ratio.

greatwhite hunter, I am proud of you. Did you order the 1/2 cow from Willowside?

Three Dogs BBQ, It sounds like you have had experience with farro. I think a soup would be better too.