WHEN THE MOON HITS THE SKY LIKE A BIG PIZZA PIE 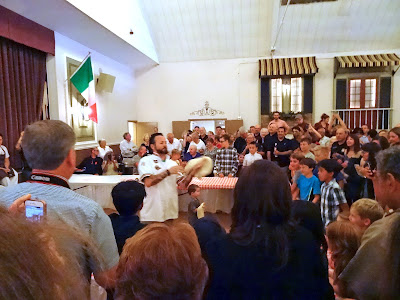 That's Amore. It was pizza night at the Colombo Club. The Colombo Club is the largest Italian social club on the West Coast and we were guests tonight of our friend Frankie.This was a fun filled night with so much food and beverage. Nobody, I mean nobody left this event hungry. The evening started out with a pizza tossing demonstration by the celebrity pizza chef Tony Gemignani. He has been on television numerous times, owns restaurants in Vegas & San Francisco and holds world titles in pizza tossing. He memerized and entertained this receptive crowd. The one image below is of an older paisan and a child playing toss with pizza dough. Good times. 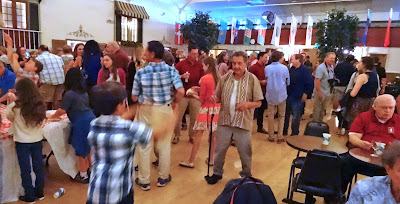 The Colombo Club has two large full bars open and available for refreshments. Tonight they were offering wine tastings for the adults. The dinner bell was wrung and we proceeded downstairs to the dinning hall. The dinning hall is cavernous and large. I believe it holds 350 plus people. The ceilings are low and the noise levels high. It all adds to the festive atmosphere. We sit down to a plate of antipasto , bread and salad waiting for us. The meal is served family style so we help ourselves. I have been to these Italian dinners before and know to pace my self because there is a lot more food to come. 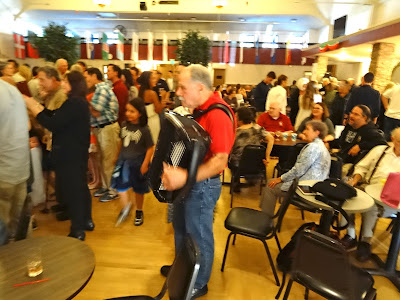 The waiters arrive with large platters of sausage and peppers. They also bring huge plates of piping hot pasta with Italian gravy. This is just a warm up to the main course of freshly baked pizza pie. The pizza arrives with a thick buttery crust topped with salami, sausage and veggies. Oh my it is so good. I hope everybody has room for the sundae and ice cream soda bar. We create our own dessert with ice cream and plenty of sugary toppings. Coffee is available too. 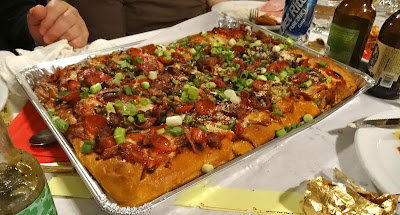 This was a fun filled evening full of food and pizza pie celebration. The Colombo Club sure knows how to throw a pizza party. Thanks Frankie for the invite.

Big Dude, We were so full. Good times.