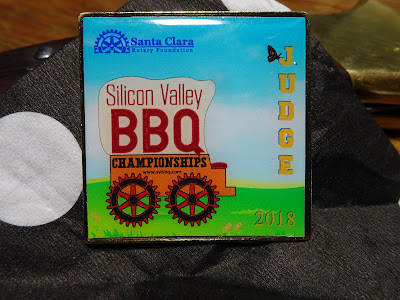 The weather heated up for the 7th Annual Silicon Valley BBQ Championship. The news cycle must of been slow because the weatherman was threatening triple digits. It was in the 90's for 40 professional barbeque teams to cook a Kansas City Barbecue Society sanctioned four meat contest consisting of chicken, ribs, pork and brisket. Ms. Goofy donned our judges badges and this souvenir pin to judge some very fine barbequed meats. Let's take a short, hot stroll of the activities. 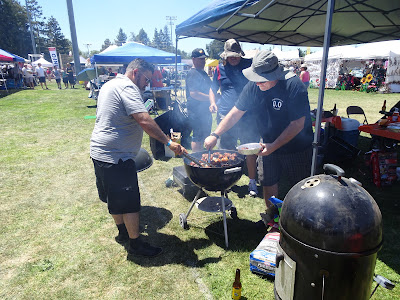 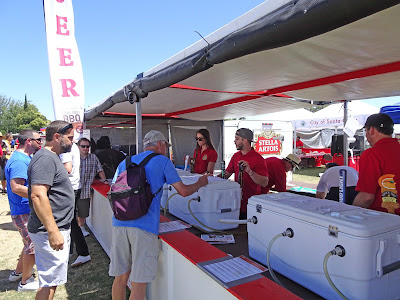 The beverage booth had plenty of business today. The imbibers then huddled under a tent for shade and relief from the sun. The main stage had a band and only a few brave women danced in the midday heat. 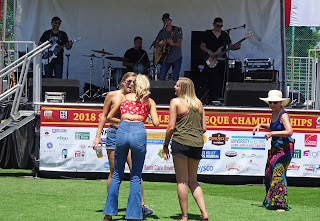 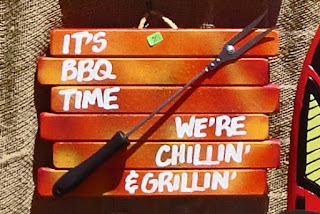 I have to admit the judges were sequestered in an air conditioned room. Today's event was sponsored by the Santa Clara Rotary. They spoiled us as judges. They gave us a goodie bag full of candy and a souvenir pin. They also baked us three different flavored brownies to snack on after our judging duties. I ate mine and Ms. Goofy's. I crave sweets after eating so much delicious meat. Okay I crave sweets all the time. 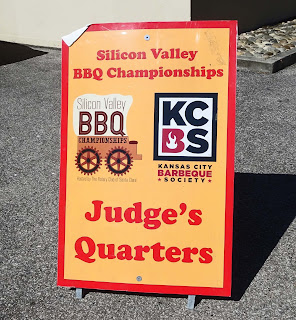 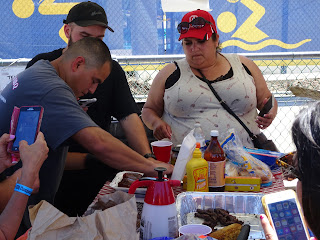 The man wearing the yellow tank top on the left is Ryan Pang. He is a local celebrity from who has appeared on the Food Networks; Guys Grocery Games and also is the head chef at the nearby restaurant QBB. He is also a friend and all around good guy. We visited his restaurant in a past article. Review Here 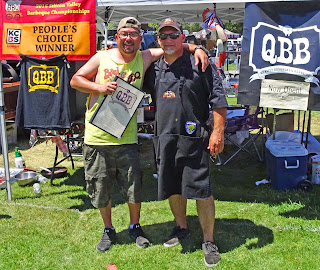 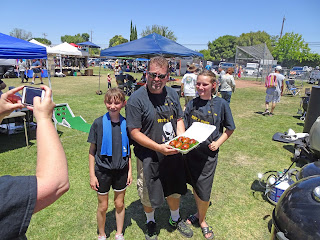 The Grand Champion today was the bbq team "Burnin And Lootin". Santa Clara Silicon Valley knows how to throw a barbeque contest. The heat did not damper the mood and spirit of participants to have a great time.  Luckily the temperatures have dropped back down to the Bay Area norms. We have a little temperature bump and we panic. So until the next contest we bid adieu. 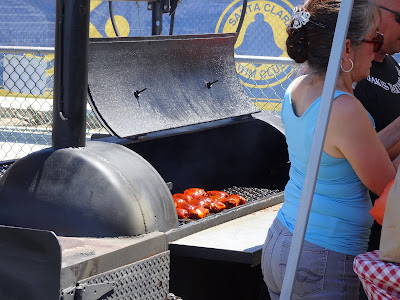 Posted by Chilebrown at 6:25 AM

Cooking when in the 90's was a strong motivator for quitting my little BBQ business.

Big Dude, I wish that I could have been a customer. Some of the competitors have air conditioned rigs.