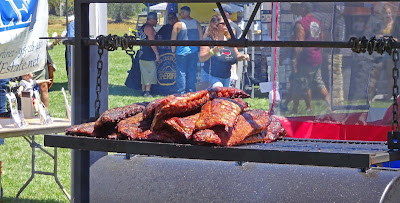 There was a protest at the bbq contest in Martinez this Fathers Day weekend. We briefly stopped by to visit with some of the competitors but left before the brawl happened. This contest was not a Kansas City Barbecue Society sanctioned event and our judging services were not needed today. It still was a fun event that showcased a lot of local backyard bbq enthusiasts. There were a lot of families enjoying this day. This was a festival that should of been a fun and safe place to enjoy the weekend. This was all shattered by a crazed, misguided, disruptive, anti-social group that goes by the name of Direct Action. They have been responsible for other protests in the Bay Area and we witnessed their shenanigans at the S.F. BBQ festival. 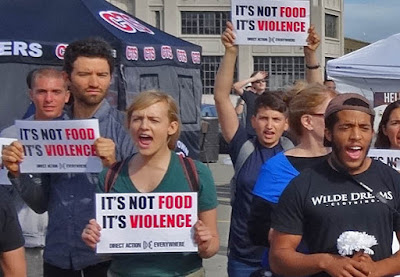 It was time to give out the awards to the bbq competitors. A gentleman rushed the stage with a ruse of needing the microphone to find his lost child. He grabbed the M.C. mike. He then started to spew his anti-meat propaganda. The mike was physically taken back but this was only the beginning of the chaos. More protesters took the stage and did what they do; annoy and disrupt. The details are a little sketchy but violence erupted with some people getting hurt. A spokesman for the protesters  compared meat consumption to eating a human child and denied that her group was responsible for violence. Regardless of who started the violence this groups actions caused the violence. Oh my. This is life in the Bay Area. Never a dull moment.

Here is a link to the local news coverage of the protest.