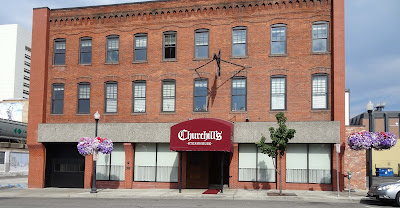 Being at a three day Buck Knife Collectors Club convention can really work up an appetite. I was out of town and asked the locals in Spokane Washington which was the best steakhouse in town. Churchills steakhouse was mentioned several times and I decided to give them a try. Parking was not a problem but brings some quarters for the meter. I would like to mention Churchills is located downtown Spokane and this area has seen better days. I was the first person to be seated at this empty house of steak tonight. Being the first and only customer you would think I would get top notch service. My meal did not start off very well. I sat and waited for the waiter to show up. Ten minutes went by and I was going to give him five more minutes before I walked out the door. He did show up at the fourteen minute mark. He asked  me if I wanted to see the steak selection. He brought out raw cuts of the various USDA Prime Choice Black Angus corn fed bliss. (lobster too). I chose the sixteen ounce New York. My waiter, though tardy was pleasant enough but this was not the first time I would be sitting alone for extended times. 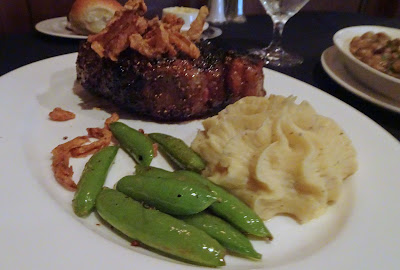 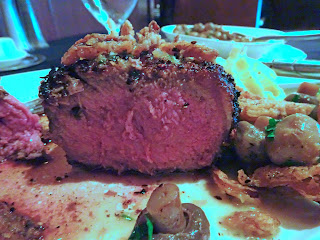 The steak was cooked in an infra-red broiler at high heat. It was also seasoned with a special spice rub. The rub and the high heat formed a very dark meat crust. The steak was cut open to reveal a perfect medium rare. Drumroll please. This steak will go down in my memory banks as being one of the top ten best steaks ever. Wow, this steak was tender and the meat crust added a texture component that could not be beat. Corn fed prime is so good. The sides of mushrooms peas and mashed potatoes were decent and filling. Churchill is also known for their dessert. Behold the 'Chocolate Sack'. 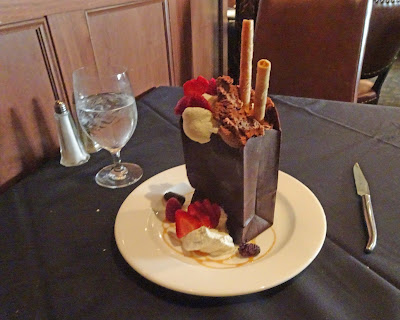 The Chocolate Sack is not the most imaginative name for this creation but it is impressive. It is huge. The sack is yummy dark chocolate. The filling is of cake, whip cream, chocolate mousse, raspberry, strawberry and more. The waiter, my new waiter (Did I mention my original waiter disappeared for what ever reason, suggested to cut down the center of the sack and dive right in. I did my best but I could not finish this sack.

In conclusion come to Churchills for one of the best steaks ever but hope you do not get my tardy disappearing waiter.

The steak looks perfect and glad it was such a hit. I prefer to eat at home because, like flying, going out to eat is rarely a totally pleasant experience, especially considering the prices.

Big Dude, Don't get me started about my airport experience. I have had some of my best dinning experiences in old school steakhouses. I love the atmosphere, food and the majority of the time good service. It is expensive but I think it is okay to splurge once in awhile.