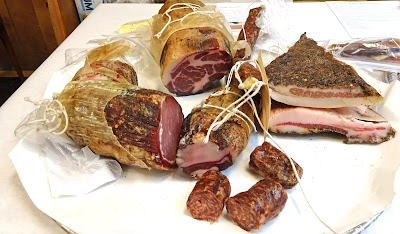 A fun way to spend a Sunday afternoon is to take a cooking class at your local Italian social club. That is exactly what happened yesterday and I would like to share my experience with you. I attend several Italian social clubs for dinner here in the East Bay. The Ligure Club offered a cooking class with the title Salume. My first lesson was ‘Salume” is not salami. Salami is a specific type of salume. Salume is a general term for cured meats (usually pork). We learned from an experienced salume maker that started when he apprenticed back in Italy. This was going to be the real deal. 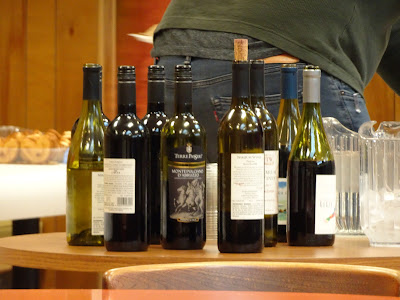 Let me explain how cooking classes work at Italian Social Clubs. One must drink lots of wine, eat and then repeat. No sooner had you stepped in the door and Tony our instructors first command was to fill up your wine glass and grab some cheese. Big rounds of parmesan, pecorino Romano and to mix it up slices of Swiss cheese were available . How did Swiss cheese make it into the Ligure club? 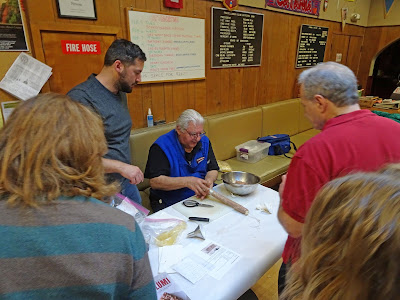 We settled in and Tony demonstrated how to season and prepare three different kinds of salume. One was pork tenderloin using a wet cure. Another was a pork loin using a dry cure. Last, Tony made a sausage made out of ground pork. He made it look so easy. He said it also helped to have a wine cellar to hang your salume for the aging and curing procedure. Now it was time to sample some of Tony’s homemade salume that he had made several months earlier. This was a treat. 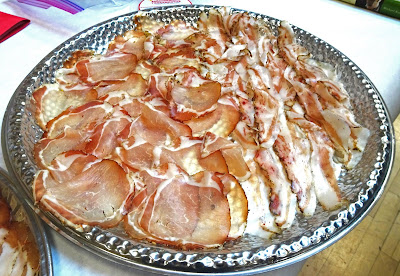 Of course after sampling home cured salume it was time to eat and imbibe some more. The club served us spaghetti with three choices of toppings. Marinara sauce, tomato and garlic or olive oil w/cheese, garlic bread and Cesar salad was a very satisfying lunch. 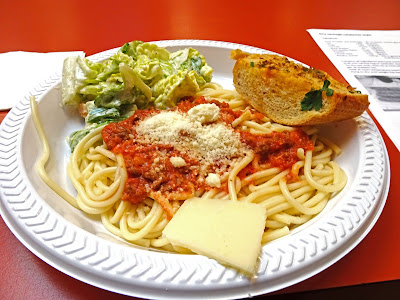 This is my kind of cooking class. It probably should have been called an eating class with a little salume knowledge thrown in. I am not sure I am going to make salume right away. I may have to build the wine cellar first.

Big Dude, We have been having fun at the Italian Clubs. We are going to dinner at the Galileo Club Friday night. You always eat well at the events.