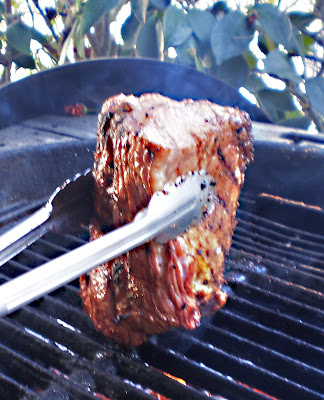 Corned Beef is on the menu for St. Patricks Day. It will have a little Chilebrown twist. This brined brisket that is traditionally boiled and served with cabbage will be charred and slow cooked on a mesquite fire. It must be served with something green to keep up the festivities. The green will be Asparagus in a quiche.
"Real Leprechaun's do Eat Quiche". 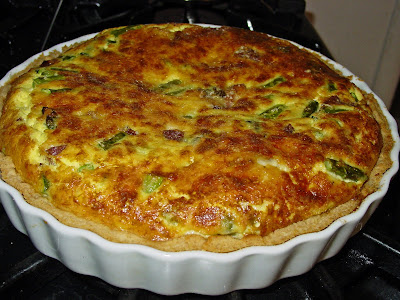 There is not much of a recipe for grilling Corned Beef. Some Corned Beef that was on sale at the local Mega-market was picked up. The brisket was rinsed thoroughly of its brine. It was dried and a little a very little salt and pepper was added. A mesquite fire was built in the Weber. All the vents were opened. When the fire was nice and hot, the meat was seared on all sides. The vents were then closed by two thirds. The beef was placed directly over the fire and the lid was secured. For the next two hours, every 20 minutes the chow was turned. After this time period the Barbequed Corned Beef was removed and loosely covered with foil. After 20 minutes it was thinly sliced. 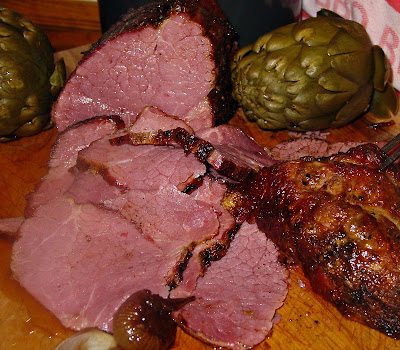 This Barbequed Corned Beef was so tender. There was a smokey exterior that surrounded the salty inner goodness. It was sliced very thin. The juices, even though it had rested, poured on to the cutting board. This barbequed brisket is a tradition at the Chilebrown house. The best part is, We will have sandwiches tomorrow. 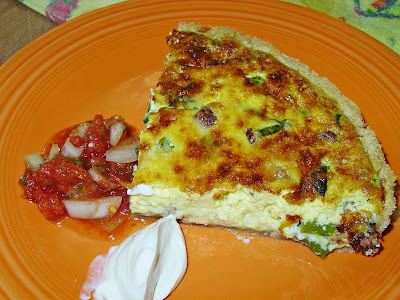 There is something about cheese, eggs, asparagus, ham and pie crust that floats my boat. When done right quiche is very comforting and satisfying. This recipe was from a Betty Crocker cookbook from the 60's. This was served with some home made salsa and sour cream. 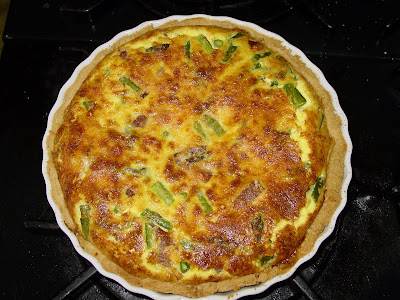 Whoops, I forgot the Green Beer!

Posted by Chilebrown at 8:33 PM

Hmmmm. I think I know where I need to head to tomorrow. Because I'm going to need one of those samwiches. In fact I need one now.

I wouldn't have thought of that technique in a million years. I am so grill-impaired. It looks wonderful.

Oh, s--t, why didn't I think of that? Mine's in the crock pot and it will be good, but not that good!

Hi Kailyn,cookiecrumb and Zoomie, Every once is a while a dish has the right combination of seasoning,smoke,heat and etc. This one really hit the mark. I do not think I can wait till next St. Patricks day to do it again.

Cookiecrumb, Will be on vacation next week. The Marin market is on the schedule. 1000am is the target time for Thursday. Any earlier,I will just be in traffic.

Oh, great. That gives me time to wash my hair.
See you at ten.

Too bad you couldn't make it. My hair looked great.

Next Week! You may have to wash your hair again.

We just go back from the City. We saw the "S.F Follies". It was too much fun
http://www.sffollies.com/