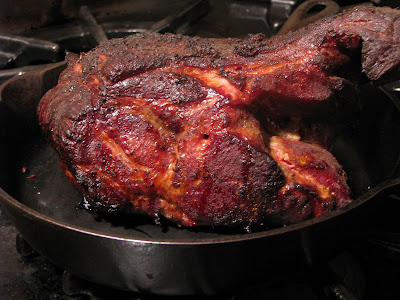 The first trial run of the Stoker has been completed. Last night an eight pound boneless pork shoulder was placed in the 'Weber Smokey Mountain cooker. All the Stoker probes were inserted and positioned in their proper place. I used my 'Nu-temp' thermometers as a back up and to verify temperatures. The cooking process started at 8:00 pm last night. The pit temperature was set at 245 degrees. Both the Stoker and the Nu-temp were in sync. I stayed up and watched re-runs of Captain Kangaroo. It just kills me when Mr. Moose tells his 'knock-knock' jokes. 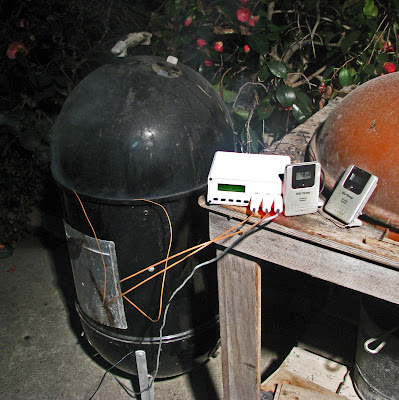 I turned in around 1100 pm and tried to get some sleep. It was like Christmas Eve waiting for Santa. I wanted to get up and check the new toy. I did get up once just to make sure it was still cooking and take a photo. At 600 am. the Stoker alarm went off. The butt had reached the internal temperature of 190 degrees. The butt looked fantastic. Not once did I have to do anything to the smoker. The Stoker worked like a charm. 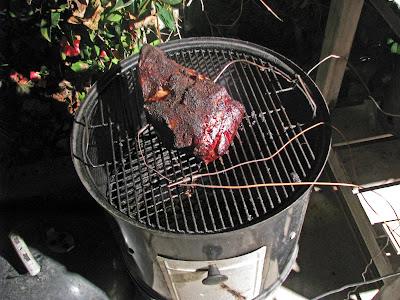 Well it is 700 am and I think I need to take a nap. Later today we will makes some rolls and some Cole slaw. We are going to use a vinegar/pepper sauce and have some sandwiches. The stoker has passed its first test. I have not hooked it up to the computer yet. Eventually it will be wireless and on the web. It is a little involved in the set-up and I will probably need some help. There will be plenty of time for more smoking later. Goodnight!
Posted by Chilebrown at 6:37 AM

Amazing! This is probably what I needed for the ill-fated corned beef!

Boris says he does not require any cole slaw. Or bread.

Zoomie, The stoker will not baste, but will do almost everything else.

Kailyn, How about you?

That pork looks fabulous! I can't help but notice all the wires coming off your smoker... is there a lot of set-up time?

Zia, Not for the non computer set-up. I need help for the rest.
Do not be scared of wires. They are our friends!!
I want a rotissere!

Oh boy.. new toys that i just gotta have!

You must be stoked to have a stoker! Maybe one day I'll buy one but in the mean time, I look forward to learning vicariously through your posts.

I would love to have the graphical feedback from my cooks.

BTW, found some artichokes yesterday but they still look kind of sad. Maybe soon we'll get some good ones. You have me wanting them so badly.