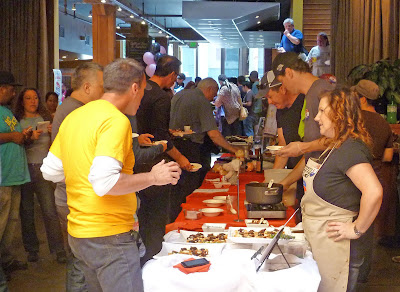 What to do on a lazy Sunday afternoon? We race on over to San Francisco to the “The Thirsty Bear’ and taste twenty different and unique bacon dishes. This microbrewery was the perfect venue, for the ‘Bacon Takedown’ contest to be held. Chefs and every day cooks were given 15 pounds of Hormel bacon to create a dish to be sampled by the hungry masses. These bacon aficionados were in a competition for a year’s supply of ‘Hormel Black Label Bacon” and other prizes. We arrived to a long and drooling line of fellow bacon freaks in front of the Thirsty Bear. At high noon the doors were flung open and the tasting began. 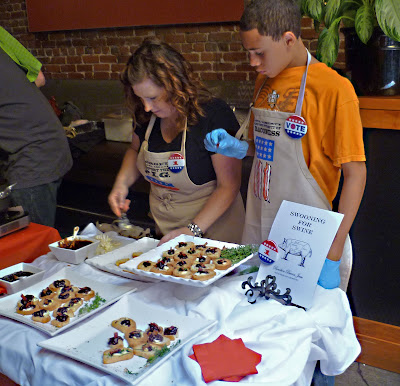 Bacon brittle, bacon ravioli, bacon sushi rolls, bacon fried chicken and liver wrapped in bacon were several choices we had to sample. We got in line and loaded up a plate with various entries. Some very tasty malt beverages were the perfect compliment to this plate of tasty cured swine cuisine. The goal was to taste all the entries and vote on our favorite. This would determine the ‘People’s Choice’ award. This was no easy decision. I had to sample the bacon ravioli several times to make up my mind. 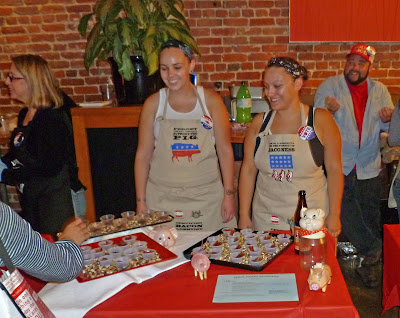 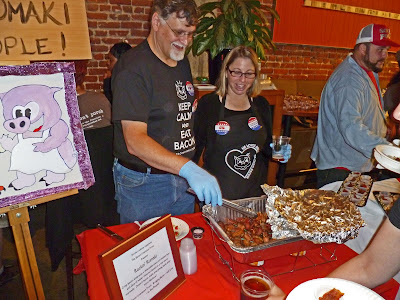 The judges made their decision of the “Bacon Fried Chicken”. The ‘Peoples Choice’ award went to the “Bacon Jalapeno Popper Tamale”. This was one bacon event that had to be experienced. We got a lot of ideas for future bacon consumption. Now, if only I had a years supply of bacon. 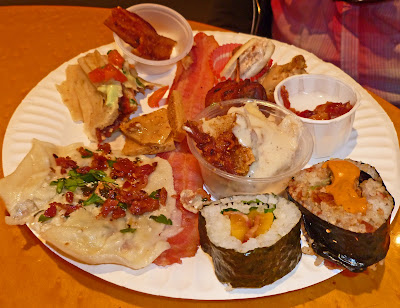 Tailor-made event for you two. The bacon fried chicken sounds marvelous to me.

Zoomie, It was Tailor made for the several hundred that attended too.

The event was getting a lot of press and I figured it might be a zoo. Thanks for going and reporting back.

Greg, We could not miss this event. It was baconlicious!

(ha ha ha, I just wanted to try to say it with a straight face, couldn't do it)

The tamale sounds like I'd love it. Was it simply a popper rolled up in a tamale?

Chris, I agree that bacon,(I can't aay it either). I do not remember the paticulars of the tamale. I remember it was served with a salsa. It was not overpowered with bacon. One of my favorites was the bacon ravioli. I am sure I will make a version of my own in the near future.