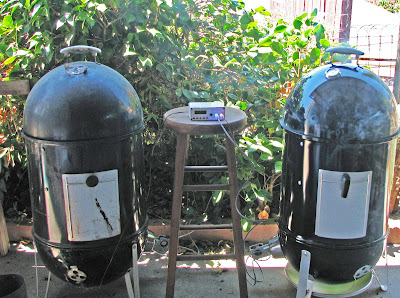 “Let the games begin”. It is the dawning of a new age of smoking at Mad Meat Genius. We had an inaugural run with the new Weber Smokey Mountain cooker. This is a barbeque smoking tool that Ms. Goofy has laid her paws on to claim. Some baby back ribs and some chicken thighs were cooked in the name of science and good eats. We set up two WSM’s in competition mode. They were set up side by side separated only by the controlling ‘Stoker’ unit.. Only Ms. Goofy’s smoker will be used today because this is a trial run only. 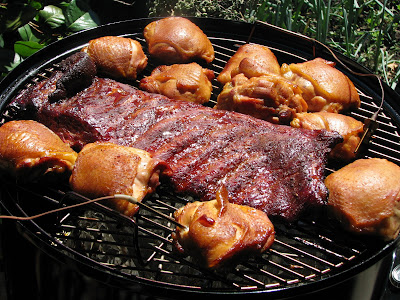 Both meats were prepared for smoking. The rib membrane was removed from the rack and rubbed with Harry Soo’s secret preparation. The chicken was trimmed and rubbed with a good commercial rub. The smoker was lit using the minion method. Hickory wood was the smoking material. The pit temperature was set and the ribs went on first. The ribs were smoked for three hours and checked. They were removed, wrapped and seasoned with some additional items. The wrapped packet went back on the grill for another hour. We cannot reveal all of our techniques but they were learned at Harry Soo’s class. 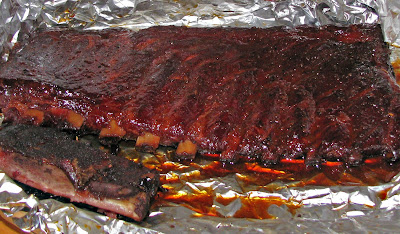 The chicken thighs went on the smoker the last two hours. They turned a beautiful mahogany color. The smell was very intoxicating. Once the internal temperature of the chicken reached 170 degrees a commercial barbeque sauce was lightly applied. A few more minutes and everything was removed from the smoker. 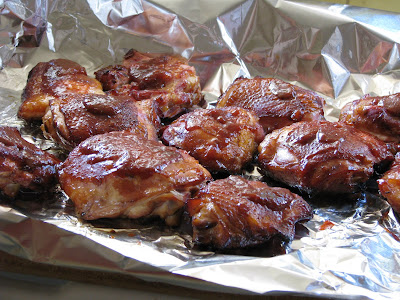 The ribs were removed from there tin foil sauna and a barbeque sauce was sparingly applied. Ms. Goofy began to cry or maybe that was me because this first batch of meat looked and smelled so good. The ribs were perfectly cooked. When you bit into the rib the meat easily pulled away from the bone and left the perfect bite mark. The smoke flavor was present but not overpowering. The sauces and rubs were used with restraint to let the meat flavors shine through. The chicken skin was crispy and the meat, oh so ever tender. This was a victorious day at the Mad Meat Genius competition grounds. We look forward to many more contests to come. 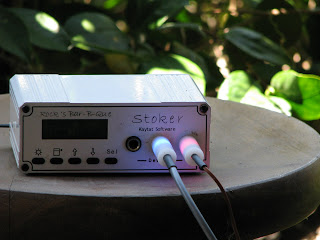 Posted by Chilebrown at 9:02 AM

I am salivating. And also very hungry now.

Success!! It all sounds awesome. I haven't done chicken on my 22 yet funnily enough, I think I'm worried its going to be too dry? Yours looks stellar...

Wish I was there... even though it's great here!

Kailyn, Borris would be proud.

Foodnes Gracious, My new favorite is thighs. They do not dry ut as easy. Just watch your temps.

Zoomie, Hope to see you at the Bacon Takedown today.

The barbeque gods are smiling.Yum!

Greg, I love leftovers too!

Did you find some slight differences in how a brand new unit runs compared to your old one?

I remember when we got our second, it was like two different cookers for a while but now they cook the same. I'm guessing it has to do with seasoning (i.e. gunk, lol)

Chris, I have heard they burn hotter at first. We did an initial burn with no food to burn any factory gunk off. We are using the Stoker now so I did not notice any difference.

The plans are found on the Virtual Weber Bullet forum.