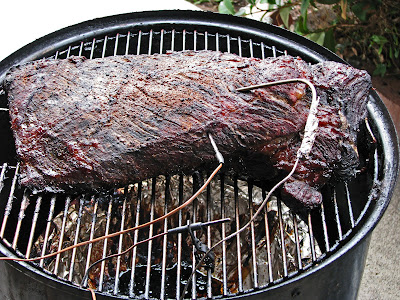 Brisket is usually the last meat category to judge in competition. It is also one of the hardest meats to cook. It can take up to 15 hours to create a tender and smoky product. We have taken Harry Soo’s barbeque class and have learned his techniques and secret ingredients to create trophy award winning brisket. We are inspired and confident to tackle this cut of beef. The first thing is to find is a ‘Left Side’ brisket. Cattle use their right side legs to get up after taking a nap. The right side is tougher because of the muscle use. (Truth?) It is not easy finding whole brisket here on the West Coast. Some Wally-Marts will carry pieces usually the leaner flat end. Restaurant supply or warehouse stores will usually carry the whole brisket.

Our brisket was procured and we needed to start the preparation. A very sharp filet knife trimmed all the fat off of the point end of the brisket. A quarter inch of fat was left on one side of the ‘flat’ end of the brisket. The next step was to inject a solution into the brisket to insure flavor and tenderness throughout our roast. We were sworn to secrecy by Harry of the actual ingredients but you can approximate of our injection by a search on the World Wide Web. Next Harry’s secret rub was rubbed all over the brisket. 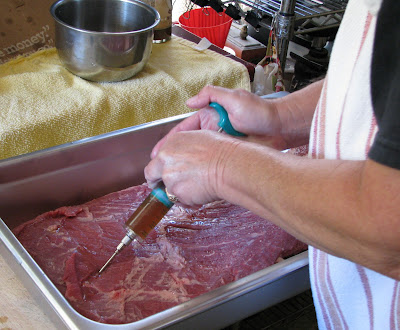 The Weber Smokey Mountain Cooker was prepared and the Stoker was set for 250 degrees. A fire was started and four tennis ball size hunks of hickory wood were added to the charcoal fuel. The wonderful thing about our new smoker is once the fire is started and the Stoker is set, we can snooze the night away. The WSM was started at 11:00pm on Saturday night. The next morning when the temperature was around 170 and the ‘bark’ (Outer crust of the roast) had set, we added some ‘Stubbs Beef Marinade’ and wrapped the whole roast in foil. The foiled roast was set back into the smoker for a couple more hours. The brisket was removed when the internal temperature reached 195 degrees. 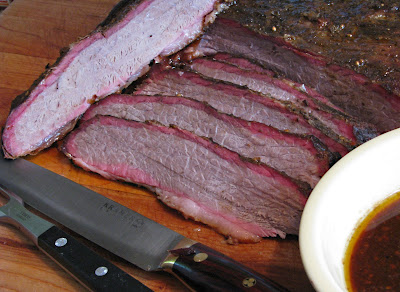 The brisket consists of the flat and point ends. There is a layer of fat that separates the two pieces. They were easily separated once the meat was cooked and rested. The flat end was re-wrapped in foil and held in an insulated cooler. We wanted to create burnt ends with the point end. The point end was sliced into cubes and seasoned with some more rub. The cubed meat was put into a foil pan and returned to the smoker for one more hour. After the hour we added barbeque sauce over the cubed meat. It was briefly returned to the smoker to warm the sauce. 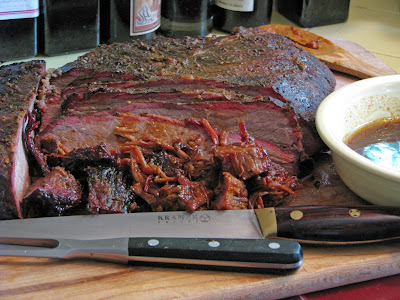 The flat was unwrapped and a large amount of brisket juices was in the foil. It was reserved for serving. The flat was sliced into pencil thick slices. A beautiful smoke ring was present and it smelled heavenly. We served a portion of burnt ends with the slices. The reserved brisket juice was spooned over the slices. Some Cole slaw accompanied our meat extravaganza. The burnt ends were to die for. This was meat candy that just has to be experienced. The slices were tender but a little on the dry side. The flavorful and sinful au-jus took care of that. If this was competition you would average the scores of the slices and burnt ends together. I would give this brisket a score of seven out of a possible nine. This was our first attempts at cooking a whole brisket. I think I could live on a diet of ?Burnt Ends”. The best part will be all of the sandwiches to come.

Posted by Chilebrown at 5:35 AM

I thought you were a master que-er _before_ you took the class - now you two are out of this world!

Zoomie, We are just having fun.

I bet it was a lot of fun. Like summer camp for the brisket; it got to sleep outside.

cookiecrumb, Then the Bears came and ate the campers.

I haven't even tasted it and I would give it the full nine. With extra points for visuals. Watch out for those bears.

Greg: Chilebrown and Ms. Goofy are the bears. :)

Greg, Thanks, You will be invieted as a judge for one of our future competitions.

Great write up on the process and the results look just perfect.