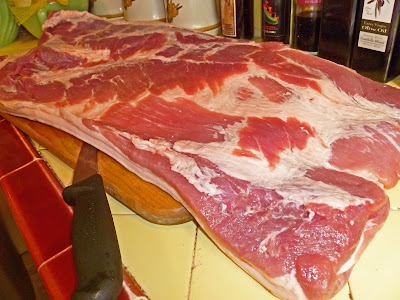 A rendezvous at the Davis Farmers market with John Bledsoe produced a beautiful thirteen pound Duroc cross bred pork belly. This swine undercarriage will be transformed into some home cured, with salt, maple syrup and apple wood smoke, bacon. My personnel preference is to make bacon without the rind or skin. It will retain more smoke and it is easier to slice. Mr. Bledsoe does not have a rind removing machine so our rind was intact. Luckily, we have very sharp knives. The skin was removed and it seemed like such a waste to toss it in the trash barrel. Let’s make some cracklins. 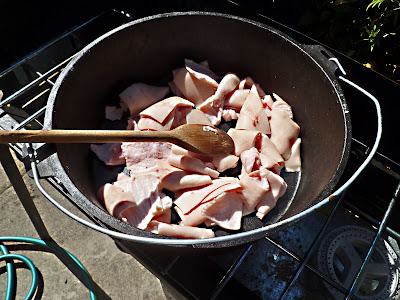 This will be a Mad Meat Genius first. Some research was done on the World Wide Web and some general guidelines and recipes were found. Everybody has their version and methods but some general rules should be followed. They are not called Cracklins for nothing. This is only fried pig skin but when they are cooking they sputter, pop and splash very hot pig oil all over the place. There also is a very unique odor that will be generated from this cauldron of bubbling piggy fat. Unless you want your house to smell of this odor it is a good idea to cook it outside. A heavy thick pot, black iron for us, will help with the cooking. We decided to cook our cracklins outside in our large cast iron pot on a portable propane stove. We also had a fire extinguisher and a water hose standing by. The rind was cut into large squares and simmered in their own rendered fat until puffy and crisp. While still hot and glistening with fat they were dusted with kosher salt. 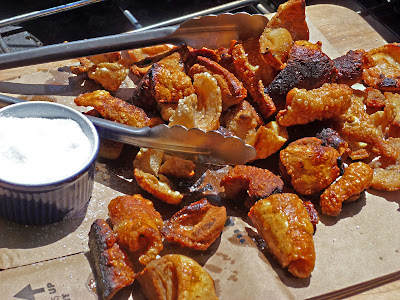 You know, cracklins are a guilty pleasure that must be experienced. Salty, crispy and an addicting pork flavor will be your reward for your effort. Some pieces had a little meat attached to the crispy fried skin. This was an added bonus to our porky fried snack. I am patting myself on the back for cooking them outside. Be very cautious if you attempt to cook cracklins because very, very hot fat will try to splatter you. Stay tuned for more bacon.
Posted by Chilebrown at 6:36 AM

Wish I had been there to taste when they were fresh - are they like pork rinds that you get in a bag like potato chips?

If fat equals flavor that must be the bomb.

Chris, a combination of both. It is not a smell like frying bacon. It is pretty pungent.