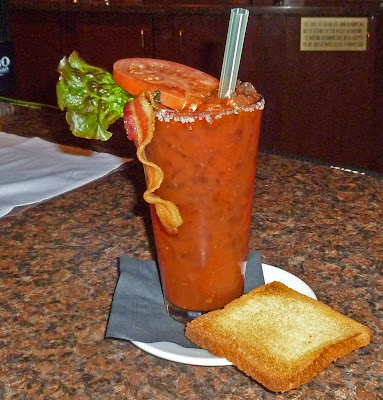 “Twisted Farm Food”, unique presentations, oversized proportions, and a whole lot of dishes with bacon is a fun restaurant called ‘Hash House A Go Go”. This restaurant has been featured on numerous travel and food shows. They originated in San Diego and now have branches all over. We visited the Reno location situated in Harrah’s casino. It was a long journey over the ‘Donner Pass’, so we had a powerful thirst. We bellied up to the bar for bacon cocktails. 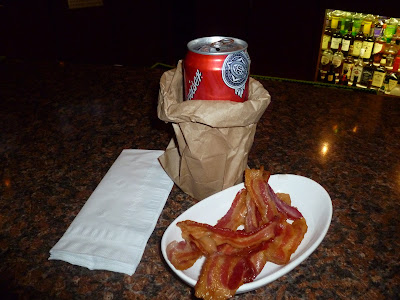 Ms. Goofy had a ‘Bacon Bloody Mary’ and I had a frosty cold beer served in a brown paper bag and a side of bacon. I think we have found our new favorite watering hole. Ms. Goofy’s drink was basically a ‘Bloody Mary’ with the fixin’s of a BLT on the side. It was served in a very large salt rimmed glass. My beer served in the ‘wino bag’ had a side order that included seven pieces of salty oily bacon. Ms. Goofy finished her drink in no time flat and was ready to dance. We danced our way to a table. 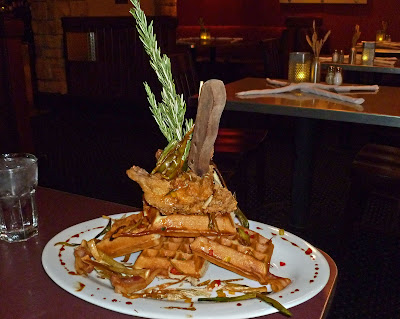 Our bright and bubbly, possibly over caffeinated server warned us several times about the behemoth sized proportions. Chicken and waffles for me and chicken pot pie for Ms. Goofy. Our server delivered our two very large plates faster than she recited the menu. The chicken and waffle plate was a huge tower of food. A large steak knife impaled the chicken to hold up this mound of food. The waffles had strips of bacon baked right in. It was quit the site. We both agreed the waffle were tasty slathered in sticky thick maple syrup. The chicken was breaded and had just the right amount of grease and salt for tasty consumption. Ms. Goofy’s chicken pot pie was large. (That was the only nice thing I could say.)
‘Hash House A GO GO’ is a fun place to belly up to the bar and have bacon infused/influenced libations. It was a fun place to visit and the meals are large.

Posted by Chilebrown at 8:00 AM

Love the presentations! Very creative and funny. I can't wrap my head around chicken with waffles (I'm too stuffy/staid), but it all looks like a lot of fun.

Holy mother trucker! I would not make it past the bar.I see a food coma in my future. Did you guys stay there? I normally stay at the Sands because my brother hooks us up.

Zoomie, You have never heard of 'Roscoe's Chicken and Waffles"? It was fun and a good combination.

Greg, Yes Harrah's practically pays you to stay there. They get it all back and then some. Harrah's is also right next to Amtrack if you are so inclined.

My brother always called that a "freeway bag," presumably so you could drink in the car.
Zoomie, did you not see Mildred Pierce? Google, you can even get the recipe.
Cool, CB.

cookiecrumb, I have heard them called 502 bags too.

Funny kind of place! The bag had me laughing, what a nice touch.