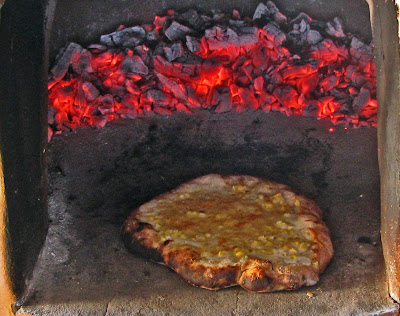 We have been having a lot of fun with our home grown Japanese corn. I would not say the flavor was much different than store bought corn, but the fact of being able to harvest and eat it with in minutes of picking does make a huge difference. These kernels explode with sweet corn milk that is a special treat. Boiled, steamed, corn cakes, corn bread, corn chowder are all my favorite corn dishes. Today we will make a corn pizza with crème fraiche, and pepper jack cheese that will be baked in the wood fire oven. This combination sounds good so let’s build a fire and make some pizza.

One of my secrets to making good pizza dough is the slow rise. The dough is made the day before and held in the Chilebrown ice cave. A couple of hours before baking it is brought to room temperature to rise some more and rolled into the desired shape. Fresh house made ‘Crème Fraiche’ was purchased at the Market Hall in Oakland. I received a little sticker shock on this price tag. A future crème fraiche making project at home is in the works. It sounds easy enough because it is a combination of heavy cream and buttermilk that is aged overnight. The pizza was assembled and cooked by a wood fire. 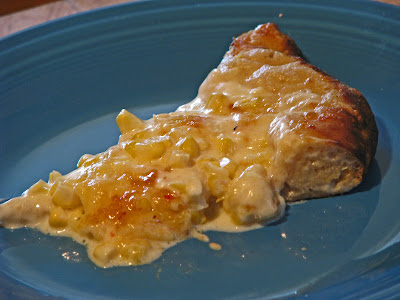 A Dean Martin album was put on the record player and I burst into song. I knew Ms. Goofy would want Dean and I to sing a duet of ‘That’s Amore’ while trying some of this non-traditional pie. This corn pizza pie was very rich with the crème fraiche. The corn with it sweet milky flavor made this almost a dessert pizza. The pepper jack added a little contrast to the sweetness. What fun we are having with our Japanese Corn! Ms. Goofy told me to can the singing but she sure loved the pizza.

Posted by Chilebrown at 5:32 AM

Love the oven shot with the glowing coals! Sounds good, too!

Thanks Zoomie! We have a lot of fun with that oven.

Greg, I think there are only two ears left. Soon it will be a fond memory of summer.

Those banked coals in the first shot are a thing of beauty.