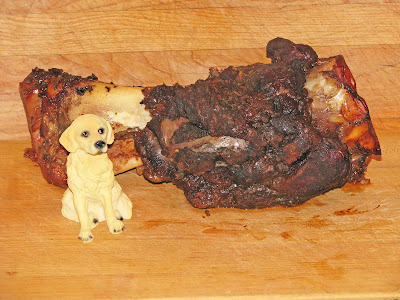 We will be cooking beef shank today, a Mad Meat Genius first. This was an experiment that sounded like some tasty fun. Beef Shank is usually braised because it can be very tough. There are tendons and fibrous muscle that need to be cooked low and slow in a moist environment. We will be cooking our shank low and slow in a Weber Smoky Mountain Cooker. This smoker will keep the temperature hovering around 230 degrees for the cooking duration. 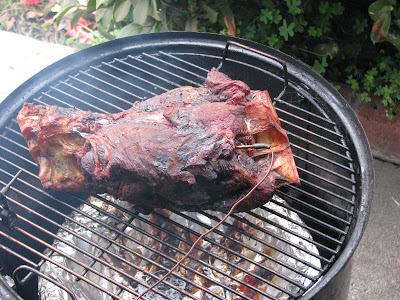 The beef shank first needs to be trimmed. There is a layer of fat and silver skin that needs to be removed. A sharp knife and a little patience is all that is needed. Some secret rub was applied and the shank was brought to room temperature. Today’s fuel will be a combination of charcoal, apple and hickory wood chunks. The cooker was brought to temperature and the Stoker was plugged in. Six hours of smoking and the beef shank was temporarily removed from the cooker. Several sheets of aluminum foil were spread on a table. Stubbs beef marinade and some more rub were applied to the shank. The meat was tightly wrapped and returned to the cooker. Wrapping the shank will achieve braising technique with its own steam. Six more hours of cooking and the internal temperature of the shank reached 195 degrees. 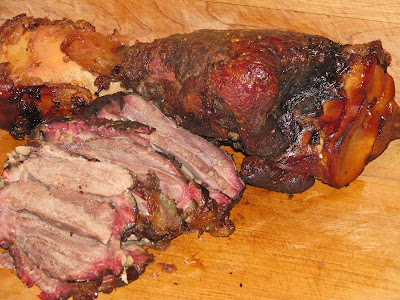 The shank was unwrapped from the foil. The meat was falling of the bone. There was a pool of marinade mixed with beef shank drippings. This liquid gold was reserved and later made into smoky rich gravy. The shank was sliced with a sharp knife. We served our shank with garlic mashed potatoes and artichokes. The meat had a pot roast quality and texture. It did have a wonderful beefy flavor. This experiment was a success. We even had a lot left over. Several days later we took left over shank and made asparagus chow mein. Yummy Noodles!
Posted by Chilebrown at 1:49 AM

Whoa, Lucy! That hunk of meat is HUGE!

cookiecrumb, It weighed 10 pounds before cooking. It was mostly bone but still had plenty of leftovers.

We are currently owners of a slice of beef shank, in the freezer. Cranky might have told you. What to do?

Good golly that looks good! Twelve hours...whew. I would need a couple naps.

Cookiecrumb, I would definately braise the shank. Yes, we missed you yesterday. I forgot what you look like.

Greg, We started it a 200am in the morning. Ms. Goofy only had to get up to light the fire, plug in the stoker and put the meat on. It was not so bad.

I'm impressed, not just by the impressive size of that beef but also by the care you used in prepping it. Lamb shanks take long enough, but beef! Wow!

Zoomie, We think it is a lot of fun to take a tough cut of beef and use certain techniques to transform them to wonderful tasty meals.

Does it come out like a more flavorful chuck roast or short rib? Looks fantastic.