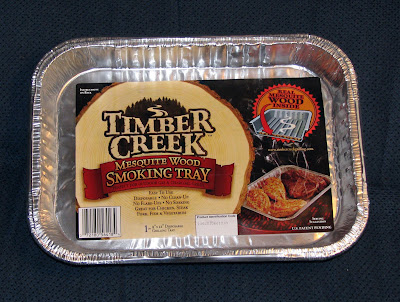 While cruising through the ‘Outdoor Section’ of a large chain discount store, I happened upon the ‘Timber Creek Mesquite Wood Smoking Tray. Why was I cruising through a large chain discount store? Do not ask. These trays were very inexpensive so I picked up a half dozen for research purposes. I went to Timber Creek’s website and found operating instructions and several recipes that sounded pretty good. 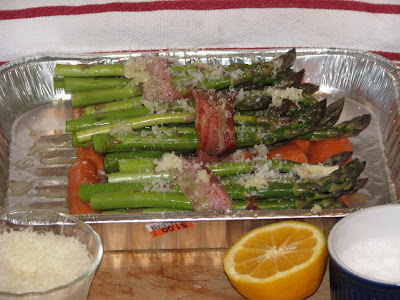 These trays are simple in design and use. Two aluminum trays with mesquite wood pellets sandwiched between the layers. Some holes are punched along the seam to allow smoke to escape when heat is applied. The instructions recommend using 70 or more lit charcoals for a heat source. The also recommend a covered barbeque or use some aluminum foil to cover and retain the smoke. 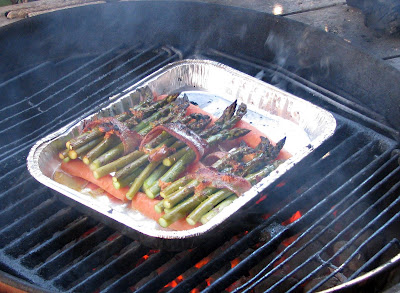 First up on the grill was some bacon wrapped Asparagus. The bacon was par-cooked and wrapped around several spears. Lemon juice, olive oil, salt & pepper and a dusting of parmesan cheese was placed on the Asparagus. Some carrots were used as a makeshift trivet. This packet was put on the fire and covered. Fifteen minutes later smoky bacon wrapped asparagus emerged. 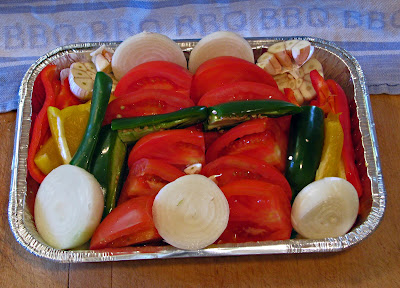 A salsa was next up to the fire. This was cooked for 20 minutes. It was cooled and blended with cilantro, salt, sugar and a little lime juice. This was just what the doctor ordered. The smoke was not overpowering but very pleasant.

Last but not least some flap steak and fajita fixings were put to the test. I was a little disappointed because of the lack of carmelization and grill marks that a hot grate can deliver. The website did recommend searing your meat on the grill to start. I guess I did not read that part. 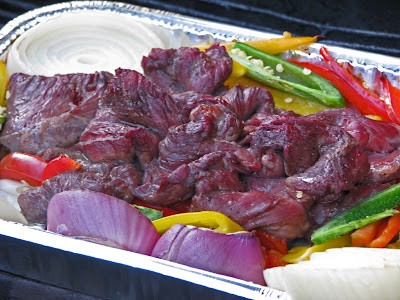 Timber Creek Mesquite Wood Smoking Tray’s are convenient. Just toss the pan when done. I think this would be great for a picnic. They do use way to much fuel. I can cook and smoke the same amount of food with half the amount of recommended charcoal. I would recommend these pans if you are not familiar with smoking techniques. They are inexpensive and very convienient.

Posted by Chilebrown at 9:35 AM

I love that you tried several recipes using the trays - the salsa sounds like a winner and the veggies would be lovely that way.

I'll bet you won't find those trays again, if you don't hurry. Looks like they were being dumped for a dollar a pop.
The salsa looks fantastic.

Zoomie, I think this would be a great product for you. Would you like a couple?

cookiecrumb, That is what I paid. I went on E-Bay and they sold as high as 8.99.

Everything looks wonderful! Looks like you are staying busy.

Interesting things. Reminds me of those "smoke wood in a can" things they sell.

Greg, Thanks, Lucy has been keeping us very busy.

Chris, I will try anthing once.

Nice pictures! Next time I grill, I will def make some asparagus wrapped in bacon!

I was only looking for timber for an australian made furniture project that I am working on when I stumbled upon your blog and the cook in me made me stay over here. I couldn't be more amazed at your recipes mate! Pretty enticing!