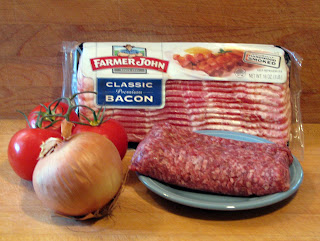 Boiled bacon? This will be a Mad Meat Genius first. The inspiration for this madness is Guy Fieri making an over the top burger on his show. Bacon is boiled for two hours. It is drained and formed into patties. It is then fried and used as a garnishment for a hamburger. How could I resist? We will be using some generic bacon purchased at our local Wally-Mart. The hamburger will be made with ‘pink-slime free’ ground beef procured from our friend Angelo. We did have to make a special bacon press for this procedure. 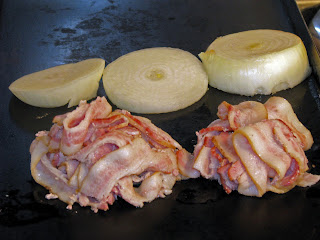 The first step is to boil your bacon. A whole pound of bacon will be put into a large pot of cold water. Bring to a low simmer and cook for two hours. The first thing we noticed is the smell. Boiling bacon emits a putrid smell. Is it the chemical preservatives in this no name bacon? We had to open a window. After 2 hours remove and drain your rashers. Let bacon cool and then form in to two patties. Yes, you read correctly, two patties. Place your formed patties on a hot griddle and place your bacon press on top. 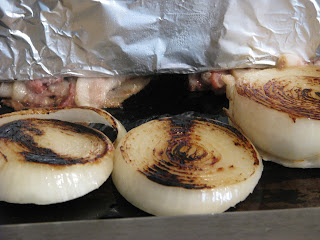 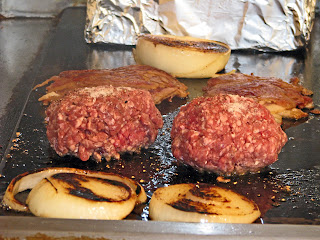 I will spare you the details of cooking the actual hamburger. We did use 8 ounces of meat seasoned only with kosher salt and freshly ground pepper. Assemble your burger with all the usual accompaniments including your bacon patty.  This was one large hamburger. The beef was juicy and tasty. The bacon patty was crispy but not very flavorful. In fact it was a little disappointing. The salt had been removed from the boiling process. We never re-seasoned this patty. I am not sure salt could have rescued this bacon puck. Not all cooking endeavors are a success. This is one. 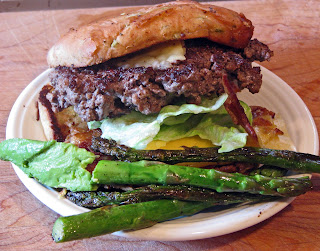 Posted by Chilebrown at 8:49 AM

I wonder if uncured bacon would have been less stinky? It seems to me though that boiling bacon is on line with boiling ribs before Q-ing, something I have never been a fan of. Oh well better luck next time, Cheers

I saw him make the pig patty on big bite. I think he actually got the idea from Hodad's in San Diego on triple D. I'm glad you tried it. I had a horrible vision of a fatty pot to clean up.Not my idea of fun.

Toons, I will not waste any more bacon on boiling again. It was an experiment.

cookiecrumb, A very popular schmuck. He sold me, so I am a bigger clueless schmuck?

Greg, That burger on his show looked tasty. In the back of my mind boiling bacon was just not right. If you have any fatty pots Oscar & Lucy will come over and take care of them.

A lot of work for little reward. Sad, really. We had bacon burgers this week, too, but we just mixed bits left over from a breakfast into the hamburger meat and fried. Delish.

I just looked at your post and wondered how the burger mashing worked? I questioned the browning first then mashing idea.What say you?

yazoo! This whole deal is a fantastic use of bacon fer sure! Great post!

Zoomie, The time and effort is something we enjoy doing. Bacon with burgers is a great combination. Bacon with almost everything is a wonderful combinatin.

Greg, I am undecided about the mashing idea. I have had good results both ways.

Chef JP, I am looking for vidalia onions right now.