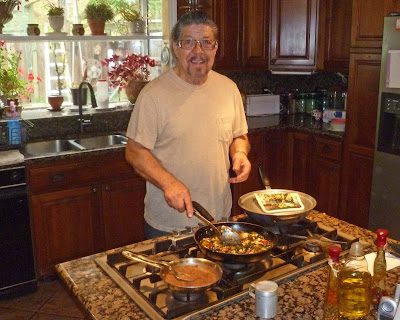 We are going to revisit and once again try the dish Carne Machaca. Machaca is a dried beef product that has been marinated, cooked, dried and shredded. Our last experience with Machaca the results were less than stellar. Salty, with a funky off putting odor was a little too much. Andres Jaramillo, President of ‘Don Pedro’s Meat’ offered us a sample of Machaca that he produced. He claims that his popular Machaca was made with lean beef, salt & pepper, slow cooked and dried. We took him up on his offer and will try this beloved Mexican dish again. I am bringing out a secret weapon this endeavor. Ray, my friend and accomplished Chef will be making us breakfast with our Machaca. He used to own the very popular Mexican restaurant ‘Margaritas’ in Martinez California. This should be a very tasty experiment. 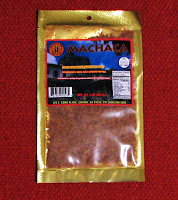 When I walked into Ray’s kitchen the aromas were intoxicating. The smell of fresh tortillas on the grill and onions and peppers cooking made me swoon with anticipation. We were going to cook the Machaca with sautéed onions, jalapeno peppers, tomatoes and eggs. We cut open the package of Machaca and took a whiff. It was very pleasant smelling. It smelled of dried beef. It was chopped very finely almost to a powder consistency. We took a little pinch and gave it a try. It was tasty with a beefy flavor. It was on the salty side straight out of the package. 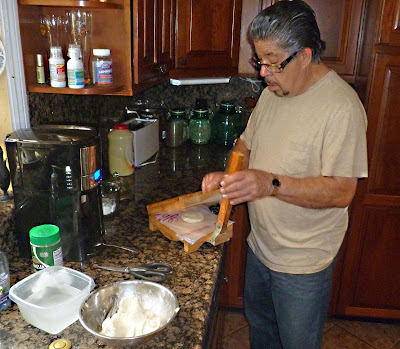 Ray sautéed the onions/tomato mixture until it was soft and fragrant. We then added the whole package of Machaca. We later found out that we only needed to use several tablespoons. The mixture was cooked for several minutes before we added beaten eggs. No additional salt was added. Several more minutes of cooking and our breakfast was ready. Home made fresh tortillas, salsa, a cheese & pasilla chile dish, refried beans and our star ‘Huevos con Macha’ lined our breakfast table. A tortilla was our canvas. The painting consisted of a scoop of our Machaca and egg mixture with a little dab of salsa. 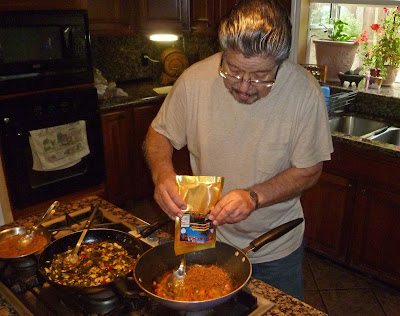 This was dish was an outstanding success. It smelled heavenly. A deep rich beef flavor permeated our egg mixture. The level of salt was perfect and accented the other ingredients. Because this beef was chopped so finely it practically melted and became one with the eggs. The peppers and salsa was warming. This was a comforting breakfast. The fresh tortillas with Machaca eggs have made me a convert. Ray is one hell of a cook. Is it okay to take a siesta right after eating breakfast? 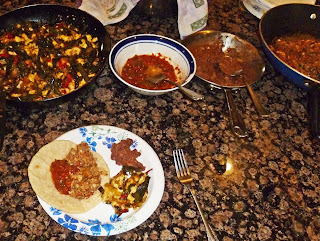 Don Pedro’s Meats is located in Southern California. They not only make Machaca but other Jerky’s, dried meats, chorizo and salsas. Thanks to Andres Jaramillo for introducing us to some great tasting Machaca.  Thanks to Chef Ray for being a great friend and cook.

That sounds more like it. Whenever I've had machaca, it has been that feeling of the meat becoming one with the eggs.

Kailyn, The first time we must of got a bad batch because it was sure funky. This stuff from Don Pedro smelled and tasted great. I will make it again.

I have never even heard of this Machaca except from your blog. That's one of the great thing about reading food blogs, you get out of your neck o' the woods and find exciting new stuff.

Chris, Machaca is fairly new to us. We stumbled across it at a market. It is great to find new/old food.

Mr. Chilebrown:
I am really glad you liked the authentic machaca we sent you, and I am glad you enlisted a "chefito" to share the joy of making this wonderfully traditional dish. Although I have to say, if you made the whole bag in one breakfast, you either had a lot of people over or had to take a really long nap. To make one pound of machaca we use about 4 pounds of fresh beef, and since the only thing we take out is water, the nutritional content of that 2 oz. bag was equivalent to an 8oz. steak. I usually put about a spoonful of machaca per person, but you won't hear me complaining about people using too much of it. Next on your epicurean exploration of the Mexican Breakfast tradition should be "huevos con chorizo".
I look forward to continue reading your blog. It is very interesting. Cheers, and happy, delicious thanksgiving.
Andres

Unparalleled Line, We did use the whole bag and it was delicious.Thanks again!

I love it when a plan comes together!