Here we go again. Bacon is cured by definition. If it was truly uncured you would be buying slices of pork belly. The truth is it this bacon by Llano Seco is cured by celery juice (celery juice extract has the same properties to cure as nitrates but is considered natural) and not nitrates. The Government in all its wisdom has allowed producers to use the misleading term ‘uncured’ when nitrates are not used. I apologize to start out this post with one of my pet peeves. Let’s try again. Today we are sampling some Llano Seco Uncured bacon. We procured this lovely specimen on our last Meat Adventure to Chico with our friend John Chips. We are going to make some stuffed jalapenos to give our bacon a try. 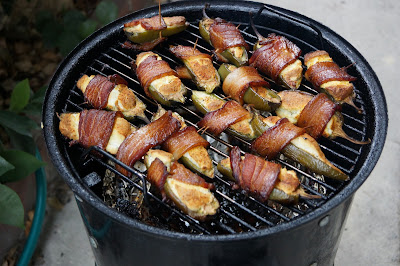 Llano Seco is a farm in Northern California. They use a cross breed of Duroc and Berkshire. The hogs are raised in a pampered surrounding that can only be described by many politically correct buzzwords. This package contains 12 ounces, not a pound which has become an industry standard. They are sliced very thick and count out to eight slices. The fat to meat ratio is fair. The package claims the bacon is smoked by hickory and maple. The fat looks very creamy and smooth which is a characteristic of quality pork. We use this bacon to wrap some stuffed jalapeno poppers.


Our stuffed jalapenos were cooked in a smoker for a couple of hours. The bacon crisped up very nicely. The smoke level was high but this most likely was from the hickory and Applewood that was used in the smoker. I did like the flavor of the pork. It had a mild beefy like taste that almost could be compared to veal. This is not your Wally-World variety of bacon. The cure of salt & sugar was in good balance. Overall this is quality bacon despite its misleading title. We enjoyed it.

Llano Seco
Posted by Chilebrown at 6:47 AM

What? Approval of faux cured bacon? Next we will be seeing tofu hot dogs on your grill.

I must admit, the bacon does look nice in the package. I'd give it a shot.

Mr Brown I believe you should number your pet peeves, so you would have more time to review meat products. Oh that's not very good idea your list would require glossary that is so large no one would read it. Never mind. GWH

Three Dogs BBQ, I do not approve of the 'faux' labeling. 'Lipstick on a pig' of sorts for a decent bacon.

I'm number one! This is a great day. GWH

Today I learned about celery juice. I didn't know that.