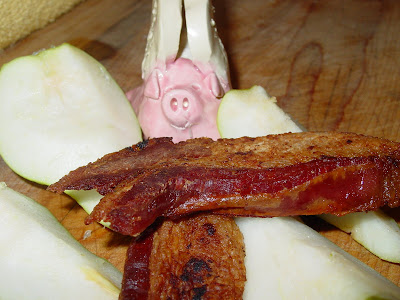 Tonight we are having a special 'Bacon Revue'. This a one time only performance. If you are late to the show you will not be seated. Have a seat and experience the feeling! What is Cookiecrumb bacon? It is a bacon made by a fellow food blogger. You can view all of her Genius at 'I'm Mad and I Eat'. Cookiecrumb took the initiative to Crank(y) out some bacon. We were lucky enough to be gifted a precious sample. This sample also included pears and plums. The pears are circling the wagon, so lets get to the Revue.
Today's bellies were procured from Prather Ranch. They were cured from a recipe from the book "Charcuterie" by by Michael Ruhlman and Brian Polcyn. The first thing that was noticed about our sample was the fat to meat ratio. Our slices were a little on the obese side with future lard. We rendered out of all this goodness in a cast iron skillet. It crisped up very nicely. The anticipation of reviewing a friends Meat Product was a little nerve racking. Luckily the bacon crisped up very nicely. It was time to have a taste.
The first bite was very good. It did not taste salty. The sweetness was present but faint. We took a second taste. The texture was crisp with just a little chewiness. The smoke was there. YES!. Where did this bacon come from Ms. Goofy asked. I told her it was from Cookiecrumb. She exclaimed, "Now I know why this is so good!". We finished off our little sample and were very pleased. Today's Bacon will receive a 4.5 stars out of 5.

Rating: 4.5 stars out of 5
Price: Priceless
Where: Cyberspace for now! 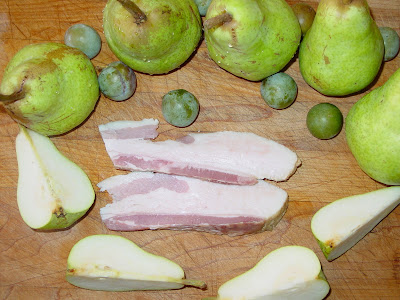 Posted by Chilebrown at 3:15 PM

We cooked up some of our Maple bacon too. Ms. Goofy said she like yours better. My bacon was saltier.
We just visited Angelo. He is so Kool. He gave us a lecture on life and bacon. He also gave me some advice on future bacon adventures.

Let's have future bacon adventures!!
I'm so pleased by your kind remarks. Sorry the sample was so stingy.