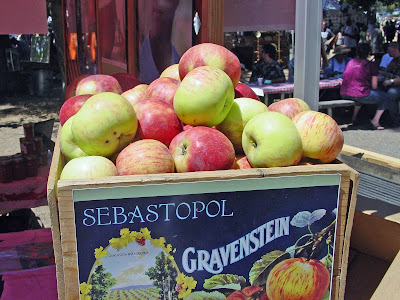 The price of gas has dropped in the last couple of weeks. Gas is such a bargain priced at under 4 dollars/gallon. This could mean only one thing. Roadtrip! Our Destination today is the Gravestein Apple Festival. It is located about 1 1/2 hours from the Bay Area in Sebastapol California. I have a Gravestein apple tree in our backyard. Hopefully, some inspiration for recipes and ideas will be gained from our excursion. I hope to run into Angelo from Angelo''s Meats. He is a character that can really lighten up a festival. He also happens to make some of the best bacon on the West Coast.
The Apple festival is a local event that showcases local artists and growers in the Sonoma area. Sebastapol is famous for growing Gravestein Apples. They still grow a lot of apples, but are turning to wine like everybody else in California. This event is held in a local park. There are plenty of food booths and craftsmen to satisfy all appetites. We sampled some of the local apples and had a Microbrew from Lagunitas.(Petaluma, Ca.). We found a crafts person that created a new mascot prop for Mad Meat Genius. Willy Birds were selling their Huge, Giant Turkey Legs. We found a booth that told us to be a pig.Yeah!
We did run into Angelo. He was in prime form He was managing his barbeque fire and booth with the help of his Daughter. Of course Angelo had time to give me a lesson or two. It is very important to listen to the Master of Curing and Butchering.. He has a lot of experience and a lot of stories to tell. He was selling Tri Tip sandwiches from his booth. He was using a medium direct fire. He was standing over that fire constantly. He was turning his beef and watching for hot spots. He had an instant read thermometer in his hand. Once these Choice cuts of meat reached 120 degrees, he would put them into an ice chest for final cooking. The confidence in Angelo showed through and through. The line was 6 deep to get one of these sandwiches. Angelo told me his rub is award winning. He shared with me, that to use his rub and get a successful product, is to use a good meat and cook it properly. Those simple instructions are so true. There are no guarantee's in good barbeque. To see a Master (Angelo) at work is a treat. 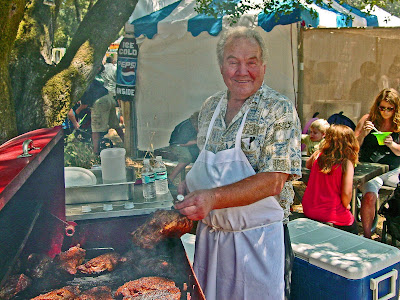 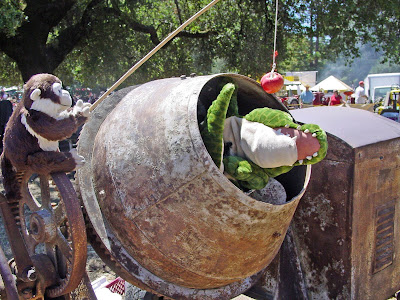 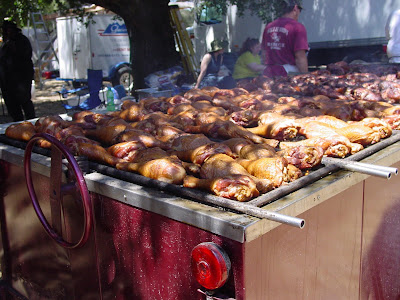 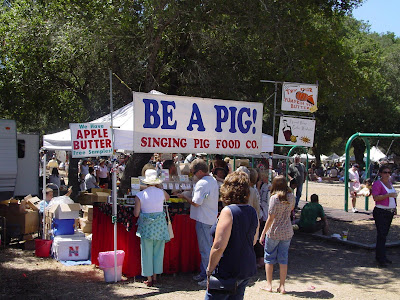 Posted by Chilebrown at 9:42 AM

We were at the apple fair also. It was a wonderful day. We had one of those turkey legs. So, so good. We came home with everything apple -- pie, applesauce, box of apples...
Looking forward to seeing you at the chili cookoff and tasting your legendary chili. I think my family will be entering as well...we're newbies; be gentle!

Hello Joaniegirl, The Apple Festival is a blast. The deadline for entry is August 19 for the Cook off. Looking forward to the competition. See you there!