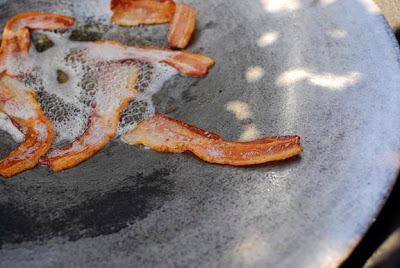 Today in the Bacon theater we have a guest Director. His name is Zachary. He has the bloodlines of a true champion. He is in the eighth grade and he likes to listen to Van Halen. He claims that all his Fathers friends are 'Meat Freaks'. He is the son of the infamous Dr. Biggles. We welcome him to the bacon tasting circle. The bacon was cooked outside on the Weber. The second act is some Hot Wings with Biggles Buck Tooth Revenge Sauce.
Some bacon was picked up at Wolfsen's in Gustine California. They did not have any slab bacon, so a pound of sliced was purchased. The bacon will be cooked on my new Cowboy Wok. It is recommended to cook bacon on the Wok to help cure the pan. We can kill two birds with one stone. The Weber was fired up with one of my favorite "Man Toys", the blow torch. When you fire up mesquite charcoal with a blow torch, you need to step back. The sparks were flying every which way. I need to purchase some safety goggles and a fire proof suit. I did not set anything on fire except the charcoal. The Cowboy Wok fits perfectly in the Weber. The Wok was placed in the Weber and the bacon was fried. Zachary became impatient because of his desire to taste the cured pork belly delights. The bacon was cooked and drained on some paper towels. The Wok was removed and a cast iron cooking grate was the replacement. Some wings were then cooked to taste some Biggles Buck Tooth Revenge. 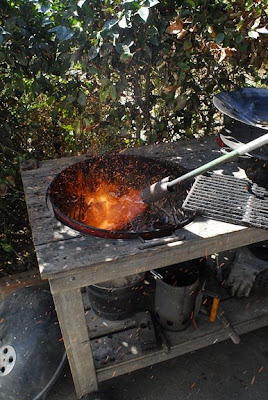 The Wolfsen's bacon crisped up really nice. We were all in agreement about the good quality of this bacon. At first bite you noticed a hint of sweetness. The smoke was present but not overpowering. The balance was just right. This was proven by Zachary's consumption of piece after piece of bacon. This bacon is a good 'Work Horse' bacon. There is nothing that really reaches out and grabs you. It is just very pleasant with a good balance of sweet and smoke. Today's bacon will receive 4 stars out of 5.

The wings were only dressed with salt and pepper. Dr. Biggles was Manning the Que. He turned and coddled these chicken parts. When they were browned and done to almost perfection, We doused a couple in 'Biggles Bucktooth Revenge'. It was time to try some of this Devil Burners sauce. Twenty four hours mellowed out this sauce of the Ages. You could actually eat some with out experiencing numbness. Once again the all important balance was what we were trying to achieve. It was definitely hot and not for the weak.The onions and garlic shined through. The molasses rounded out the punch. Bucktooth Revenge had a kick and flavor that cannot be beat. Look for "Biggles Bucktooth Revenge" at your local specialty and grocery stores in the future. 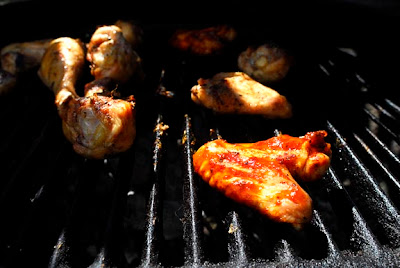 Way cool to see you grilling your hot wings. My daughter always likes em deep fried (well, me too for that matter), but I like em grilled too. Get em about 90% done, and start basting and turning. We make our own wing sauce from our super secret family recipe, and the grilling really works magic on the ingredients (hint hint: brown sugar is a main one). Plus, it helps assuage my guilty conscience for eating so much of such a fat-rich piece of meat in the first place.

Thanks Chilibrown! It's was really fun seeing you using the blowtorch (Burn, Burn, Burn!) & the bakon-wok (The Bakon Burns in it's own juices!) We had a really great time; I hope we can see you and do it all over again! Until next time --- co. director

Zachary, I am glad you had a good time. You are welcome to come back anytime. We can take the blow torch and burn some more stuff up. (If Ms. Goofy will let us.) Later.