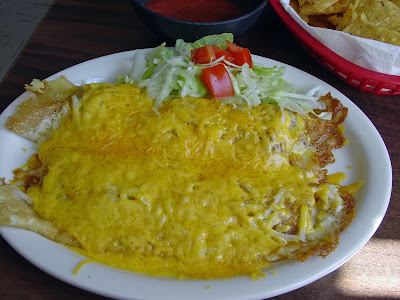 Twelve Mexican restaurants in three day.Some food was spectacular. Some was not so hot. Not so hot literally. We noticed a lot of common themes in Mexican food in this part of Arizona.
THE FOOD
Click on the highlighted "The Food" to view pictures and narration of all the food we sampled 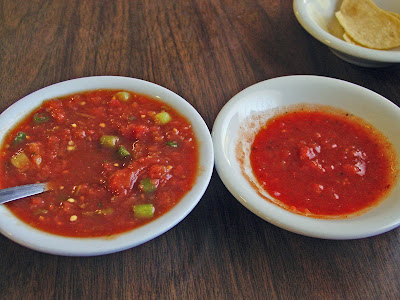 "The Usual" salsa
All the restaurants on the Salsa Trail serve a similar salsa. When you arrive, you were brought a basket of chips. These chips were not always fresh. It would be accompanied by two small bowls and a plastic ketchup container dispenser filled with salsa.. This salsa was no more than a tomato sauce with a slight hint of chile and oregano. There would be slight variations. Some would maybe have 'chunky tomatoes',a couple of chile flakes or some bits of green roasted chile. We never experienced any real heat. Cilantro is a rare herb around these parts. Oregano is the herb of choice. The salsa on the right is 'The Usual. The one on the left was made specially for the salsa competition.There were a few standout salsa's. "Manor House, Charo's and La Casitas were a few restaurants that had some very good Salsa.
Another Regional item was the "Cheese Crisp". Almost every place on the trail had a variation. The cheese crisp was a fried flour tortilla with usually American Cheese. Our favorite was from "La Mana" It had Green chile and cubes of pork. The dish was mild but very, very, tasty. It was almost like eating a thin crust pizza. 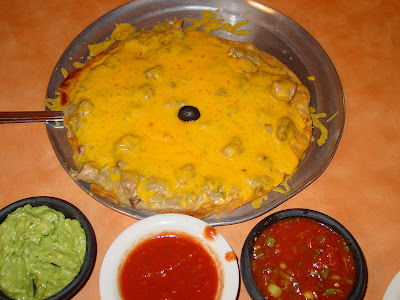 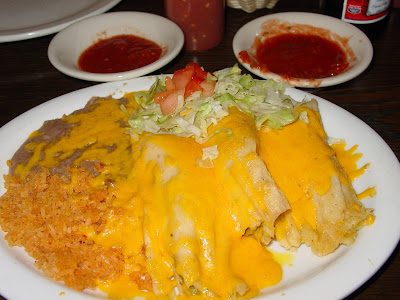 Posted by Chilebrown at 5:33 PM

Oooo. I can't do American cheese. Unless it's in a grilled ham and cheese.

After eating so many quesadillas in CA, the cheese crisps of AZ took some getting used to.