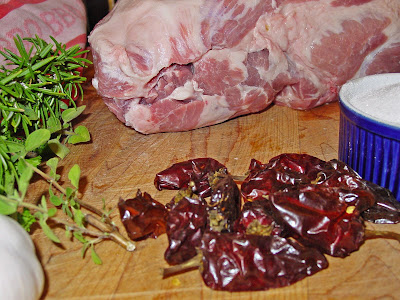 We had tickets for an Oakland Athletics game last Monday. We needed something to bring to our tailgate. Why not make some home made sausage. Pork Shoulder just so happened to be on sale at the local Wally-Mart. The pantry was checked for ingredients. Some home smoked chipotle and garlic seemed to on the right track. A quick trip to the backyard found some fresh herbs. The casings were being held in the ice cave. All we need to do is fire up the Kitchen-Aide. 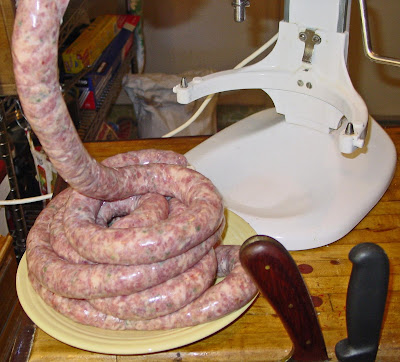 Pork shoulder has just the right combination of fat to meat, for sausage making. The kitchen-aide has an attachment for grinding the sausage. It makes quick work grinding up an 8 pound roast. A whole bulb of garlic was also ground up with the meat. A cup of chipotle peppers, minus the stems and seeds, were chopped fine. The seeds and chopped peppers were added to the meat. A healthy dose of salt was then added. A combination of fresh parsley, rosemary, and oregano were chopped and added to this mixture. Everything was mixed and then stuck in the ice cave overnight to have the flavors meld together. The next day the sausage was stuffed into their meat holding cocoons.

The tailgate was a success. These meat tubes had a healthy flavoring of garlic. The chipotle was not a heavy hitter this batch. They were served with some home made mustard and some fresh tortillas that were transformed into quesadillas. 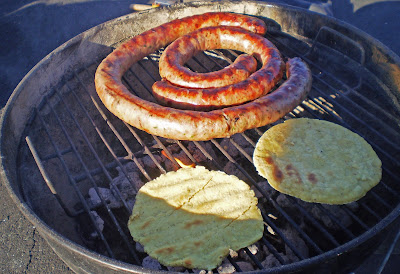 Posted by Chilebrown at 8:03 AM

Hollleee crap! Oh man, I can taste that from here. Perfection.