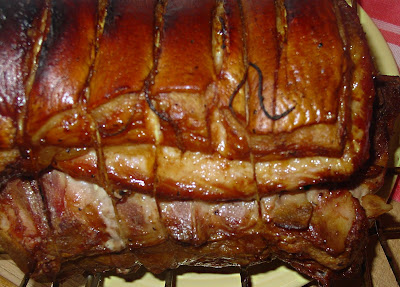 While glancing through one of my 'Food Porn' magazines, a loin & belly roast was found. A pork belly was tied to a bone- in loin roast. It was roasted in a hot oven. This was the lightbulb above my head. Of course, my roast would have to be done in the barbeque. This sounded like pure poetry. It was off to the International market for a pork belly. They did not have a bone-in loin roast, so another meat stop would have to be made. The local Wally Mart had the whole loin roast. The butcher was more than happy to cut a 5 pound prime roast for me. 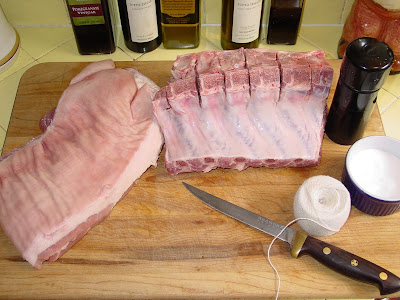 Once home, the meat was rinsed and trimmed to fit each other like they were intended. A liberal dose of salt and pepper was the only seasoning this beauty would need. I tied the two hunks of meat with some cotton string. The rind was sliced at 1 inch intervals and then my baby was placed in the ice cave. Several hours later it was time to fire up the Weber. 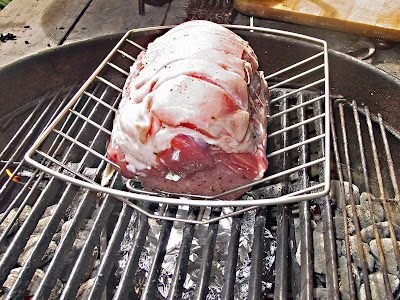 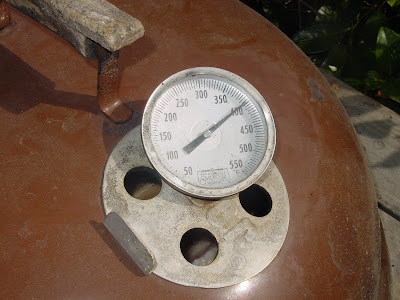 The roast would be cooked on a high indirect heat. A drip pan was placed between the two stacks of coals. A little peach wood was the smoking wood used tonight. I wanted to cook this roast above 400 degrees for over an hour. My goal was to get the internal temperature to 150 degrees. An hour and 25 minutes went by very quickly. The temperature was at 150 degrees. Time to take it out and let it rest.
Their was a camera malfunction. No shots of the slice pork today. I will do my best to describe our porkapalooza dinner. The rind on the roast was beautiful. It was a glossy amber sight to see. It tasted like the best cracklin's I have ever had. The actual belly was a glob of meat and pork fat.The fat was oozing everywhere. It was very very rich. It was a little too rich for my taste. It did not have the bacon flavor that we all know and love. The actual loin was a little pink by the bone. It tasted just like "butta". It was so moist and tender. This meat cradled by a pork belly was pure heaven. This was a fun experiment. It is hard to go wrong with pork, fire and smoke. Just make sure you have a back up camera for the money shot. 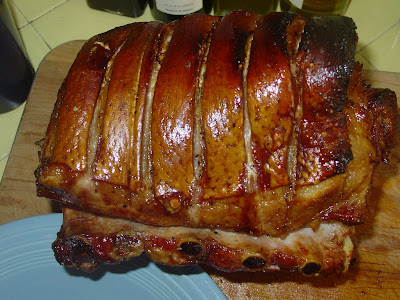 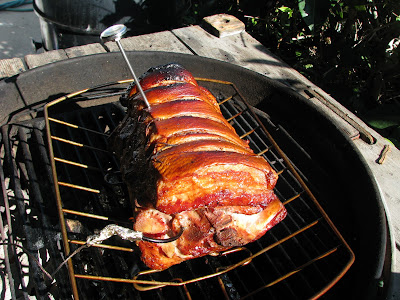 Posted by Chilebrown at 5:03 PM

I've never seen anything like that before - and I have to admit that, sinful as it may be, I want some!