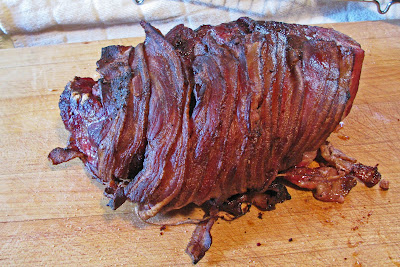 The Great White Hunter asked me if I would like a wild boar roast. I replied, "Well, maybe?" Of course I want a boar roast. The Great White Hunter had a boar roast from Washington State. Apparently there is a buffalo farm that raises these beasts for consumption. The buffalo roam and graze. Before slaughter, they are put in pens and fed grain. The wild boar raid these pens and eat the grain. They are considered a nuisance. This will be no nuisance in our kitchen.I look at it as a grain fed wild boar. Does it get any better? The Great White Hunter delivered the package and told me it was a mystery cut. We did not know the type of roast it was. It had a large bone, so I am assuming it was a shank cut. This would be perfect for a low and slow bath of mesquite fire. It just so happens that No Name bacon is in the house. Boar is very lean and a wrapping of bacon is perfect to baste the outer surface of the roast. The bacon will tame this Wild beast. 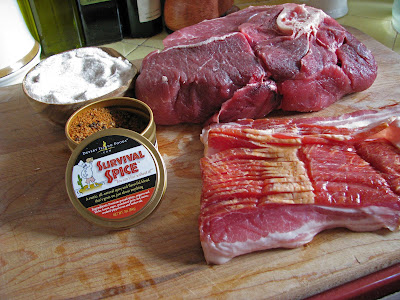 The boar meat is a dark red color. It looks like it will be full of flavor. A dusting of Survival Spice and salt was applied to the surface of the meat. No Name bacon was draped over the roast like a blanket of love. The tamed wild beast was put in a wire roasting rack. Mesquite charcoal was fired up in a chimney starter. When the coals were flaming, they were placed in a Weber to form an indirect fire. A drip pan was placed in the middle to prevent a grease fire. The vents of the Weber were closed to the halfway mark. The roasting rack with the roast was placed in the middle of the Weber and the lid was secured. It was time to pop a couple of James Brown DVDs in the machine and jump up on the good foot. GET DOWN! with your bad self. 'Sometimes I clown, then I step back and do the James Brown.YEOOOOOWWWWW!"
Ms. Goofy just told me to knock it off and turn down the music. Ahh Man! I guess the roast is done. The thermometer is hovering around 150 degrees. It is a beauty. It is all browned, bacon and porky looking. The smell is awesome. We let it rest for 15 minutes and sliced it open. It looked great.
This roast had so much flavor. There was not even a hint of gaminess. This grain fed wild beast hit the spot. The meat was a little tough. If I cooked this again, I would pull it out a little under 145 degrees. The toughness might of been a factor of the cut of the meat. We never did know the origin of cut. Hey a little chewiness gives your chops a work out. I almost forgot to mention the treat of 'No Name' bacon on the top. It was just an added delicious bonus to our meal. The mesquite fire gave the bacon a smoky kiss that could not be beat. Thankyou to the Great White Hunter and No Name Bacon. It was a bacon weekend! 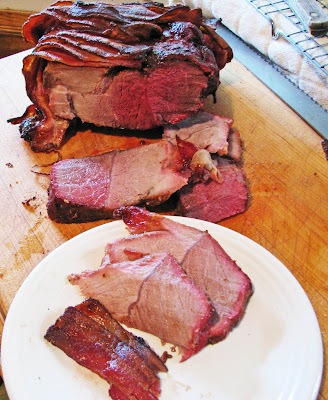 Posted by Chilebrown at 8:50 AM

Sounds delicious! The toughness may be a feature of having the boar run free all its life so the muscles were strong and it didn't have much fat. Still sounds delicious!

Ah jeez, that looks fabulous and now I'm all hungry. Zia and I were thinking about trying to rotisserie a cut. Any thoughts on that idea?

Zio, What is nice about a rotisserie, is that it self bastes. I do not have any experience with a rotisserie so I would just say, wrap it in bacon and get cookin.

Zoomie, I wish I could get some more Wild Boar.

Chef JP, I had bacon, How could you go wrong?

Wild Boar huh? I've never tasted any pesky wild boar. I really think your next post should include a video of you and that James Brown Jump Up On Good Foot yeowwwwwww. :-)