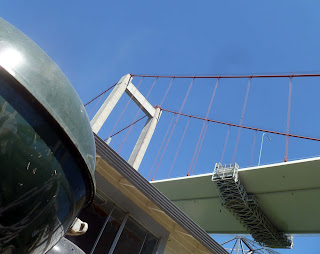 I received another invitation to spend an afternoon at the U.T.B.C. (Under The Bridge Club). This is an exclusive Men’s club that meets one a month at the Crockett Bass Club. The Crockett Bass Club is located directly under the Carquinez Bridge. The purpose of this club is to eat, drink, fish, watch sports and socialize. They usually have a cooking theme and this month was proclaimed a rib cook-off. I am no stranger to ribs and this sounded like a lot of fun. 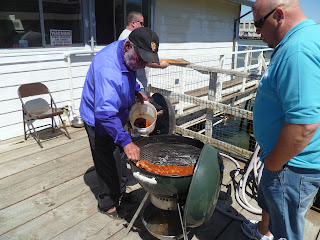 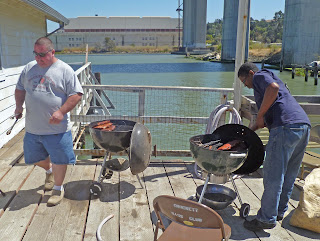 Several Weber’s were set up outside to handle our cooking endeavors. Everybody had their secret rubs and techniques to share. These Weber’s got a workout this afternoon. One was filled with mesquite charcoal and the other brickets. Hickory, peach, apple and several other woods were added to the fire to create smoky results. We all supervised with plenty of cold beverages to whet our thirst. 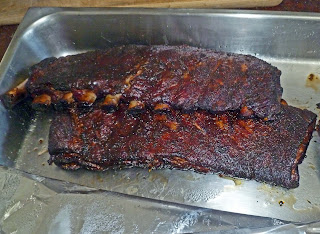 The ribs were done and it was time to eat. This meal would be vegetable free. In fact except for some fresh pesto pasta with bacon that I had made, this would be a rib fest only. I guess you could count the guacamole and salsas as vegetables. When you put a bunch of men together around a barbeque you will be rewarded with some good eats. Each rib was different and delicious. John made a home made barbeque sauce that was rockin’. I think his secret ingredients were brandy and chipotle peppers. 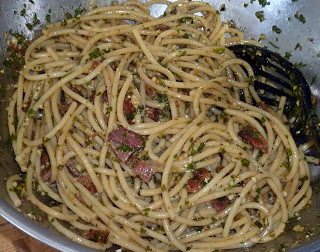 It was another terrible day of sun, fun, ribs, beer and friends at the U.T.B.C. That was what I tried to tell Ms. Goofy when I got home. She did not buy that for a second because of the grin and sunburn on my face.

Male bonding at its best! Sounds like fun and good, good food.

Zoomie, I can never get enough fill of ribs. That is why Ms. Goofy and I are in Sparks right now at the Rib contest.