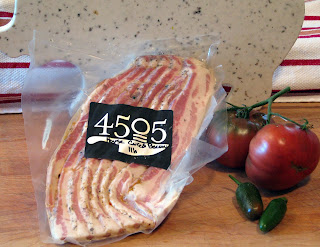 Welcome back to the Bacon Revue. Dust off a seat and soon the curtain will rise to reveal tonight’s entertainment from one of our favorite butchers ‘4505 Meats’. They are the makers of the bacon hot dog and we have high hopes for this cured swine belly. We ventured to the Lafayette, California Sunday Farmers Market to procure tonight’s act. We would like to tell you about the performer on stage tonight, but, all we know is that this is 4505 Meats ‘House Cured’ bacon. We asked the perky, cheerful vender about the process, cure, sugar, smoke, and pedigree of the bacon. She chirped; ‘It is the house cure’. We asked if maybe she could inquire and she promptly asked the friendly cook. He very nicely informed us that the bacon was their ‘house cure’. Well there you have it. Your guess will be as good as mine about our bacon performer tonight. 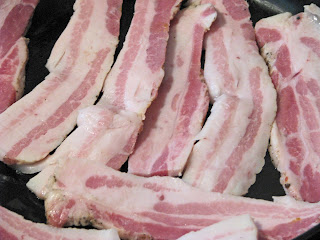 Once home and out of the package we were very impressed with the appearance. The fat was pure white with a good meat to fat ratio. This just had the look of a heritage or heirloom variety of swine. Immediately the slices of our house cured bacon was dispatched to our trusty black iron skillet. They fried up crisp emitting a beautiful aroma that only superior bacon can produce. The flavor of this pork was meaty with a slight beef like flavor. It was heavenly. The components of sugar and salt were perfectly balanced. Smoke was absent on this batch of bacon. Some jalapeno cheese bread was cooked in our Dutch oven and some of the best ‘BLT’ ever was consumed. 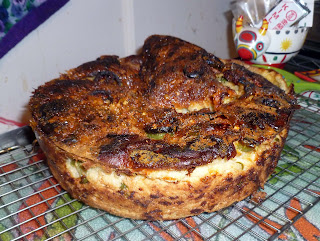 ‘4505 Meats House Cured” bacon may be a mystery of origin but it is a treat to experience. I would wager that this bacon was made with an heirloom variety of pig because of its flavor and appearance. Even though this bacon was lacking in the smoke department we will give this 4 stars out of 5. Everybody loves a mystery.

4505 Meats
Rating: 4 stars out of 5
Cost: 16 dollars/pound
Where: Ferry Plaza and various locations

Posted by Chilebrown at 8:02 AM

I hope mine turns out that well, plus smoke.

Wow, CB, that 4505 bacon looks beautiful. Like you, I'd miss the smoke. On the other hand, you can use it in French recipes, like beef bourguinon, where the cured pork is never smoked.

Zoomie, You should be fine if you can find it in your heart to follow instructions. Bacon is easy and you will be hooked once you sample your endeavor

cookiecrumb, 4505 makes quality stuff. I would of liked more information though. Are you going to make our dart tournament this Sunday?

I will miss you on Sunday. Still nursing my broken foot.

Yow! It better be happy ending for that price.