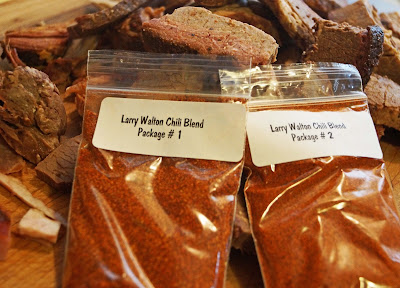 A nice perk of being a barbeque judge is bringing home leftover competition meat. Left over brisket makes some of the best chili ever. It is already smoked, seasoned and usually tender. A few spices, onions, liquid and our chopped up meat (sometimes beans)  meld together to form “A Bowl of Red” that will satisfy this hardcore Chilehead. Today we are using a blend of dried chile’s and spices named ‘Larry Walton’s Chili Blend”. This mix will add even more convenience and possibly award winning flavor to our chili pot. 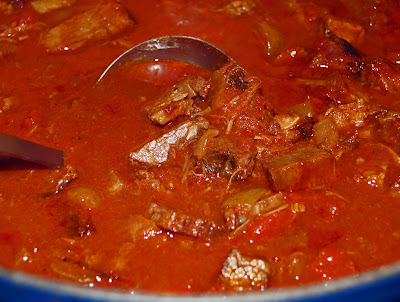 “Larry Walton’s Chili Blend’ is a mix from the spice company Mild Bills. Larry Walton is an award winning chili competitor and this may be his championship recipe. It comes in two packages called ‘dumps’. A ‘dump’ is when you add a package of spices to your chili pot. The dumps are done at different times during the cooking process for maximum flavor.
Assembling this meal could not be easier. A chopped onion was simmered in some bacon fat. (Imagine that). The first dump was added. The smell of chili powders and spices was intoxicatingly delicious. A can of tomato sauce and a couple of cups of beef broth was added. This mixture was simmered for 30 minutes. It was time to add the chopped up leftover brisket. I added more liquid to cover said meat. Once the simmer returned the second dump was added. This cauldron of spicy meat was a beautiful bright red. The kitchen smells wonderful. Thirty more minutes of cooking time was counted off. While the pot simmered, I made some bacon studded cornbread. 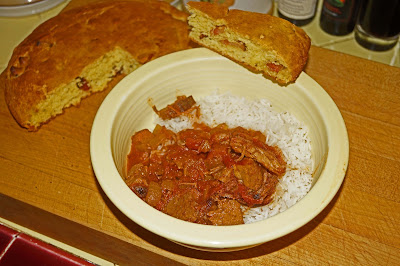 What a great bowl of red. It was well balanced with salt, cumin, spices and most important of all chili flavor. The heat level was on the mild side. This is stick to your ribs, throw you on the couch chili. It was very convenient and easy to use. The secret weapon was some of the best leftover brisket ever. Bacon cornbread was the icing on the cake. I think I am going to take a nap. Oscar and Lucy will have to get off the couch.

That sounds like fun. We used to use Carroll Shelby's chili kit, a dump of spices and a dump of masa for thickening. It was OK, but I got tired of the taste.
Oooh, that brisket! Win!

That is one fine bowl of chili! Leftover brisket is gold. I too like Shelby's but have not made it in years.

Looking really good. I just might have to make a pot if it cools down around here. 88 today...

I love chili but My Beloved, not so much. I might try the Carroll Shelby's, however, as he loves auto racing and the idea of Shelby might convince him.

Cookiecrumb, Greg, and Zoomie, Carroll Shelby was best known for his involvement with the AC Cobra and Mustangs for Ford. He also was very involved with chili competitions especially at the Terlingua Texas Chili Championships. I have not tried his chili kit. The secret to good chili is to use the freshest chili powder and spices available. I am always a little wary of a kit that has been sitting on the shelf of a store for awhile. Because you three have mentioned this particular mix,I will have to give it a try.

Three Dogs BBQ, I know you have some great leftover brisket. Do you have a special chile (chili powder)and or recipe that you use?