The Racing Honda’s destination was Livermore California. We had a smoky tip that ‘burnt ends’ were being served at ‘Sauced BBQ & Spirits’. Say no more. It is our duty as certified ‘Master Judge’ bbq freaks to investigate this meat candy allegation. Sauced is located in downtown Livermore. Livermore is no longer a dusty cowtown but a trendy wine producing destination. Sauced is located right smack in the middle of this smart, modern, new urban area. A large building surrounded by an outdoor patio has two wood pile stacks that offer a tease of possible barbeque greatness inside. We have arrived at Sauced BBQ & Spirits. 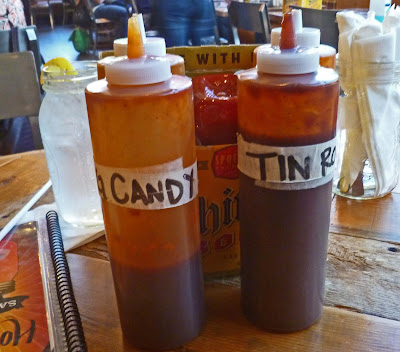 Upon entering Sauced we are immediately seated by the hostess. We have seating choices of the large sports bar area or equally huge dinning area. The place is pretty full for the noon hour. Sauced has a fun vibration. We learn that live bands play in the evening. There are numerous televisions for sporting events. We are seated and I immediately survey the four large squeeze bottle containers of bbq sauce housed in a beer six pack container. I have not even looked at the menu and I am sampling sauces. 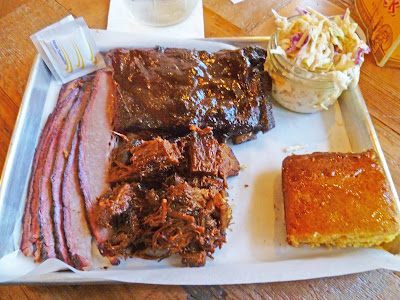 Pig Candy, Tin Roof, Hot Tin Roof, and a fourth called Georgia?  All of these sauces were cloyingly sweet. The Tin Roof was tomato based with a pronounced honey flavors. The hot version was fueled by habaneros and had a bite to prove it.  Pig Candy was another sweet sauce. The name escapes me so we will call it Georgia, had a mustard tang. All of these sauces were sweet and I am glad we have the choice to use them or not. 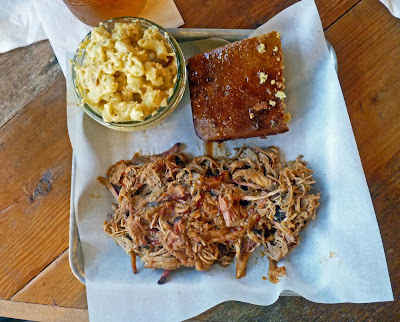 The three -way combo allows you to sample several meats and my choices were: burnt ends, ribs, and sliced brisket. The plate was brought from the kitchen promptly. It was a beautiful plate. The sliced brisket had a fabulous smoke ring. The burnt ends made me drool with its shiny carmelization. The ribs were dark and looked inviting. If only I could eat with just my eyes. The sliced brisket was tender and the pull test offered partial proof. In spite of a spectacular smoke ring, smoke flavor was absent. The beefy flavor that I crave was also missing. The burnt ends were on the mushy side. I so wanted that beautiful bite of flavorful meat candy. The ribs had a chewy crust that encased pockets of unrendored fat. Each bite I took was full of grease from  fat. Most noticeable of all three meats was the lack of seasoning. They had to use some rub demonstrated by the nice coloring of the finished product. These rubs must have lacked salt which resulted in lackluster flavor that just did not have any pizzazz  The sides were no different on the seasoning issue. A pinch of salt could have saved  this pedestrian Apple Cole slaw. The cornbread was a sticky sweet dry disappointment. 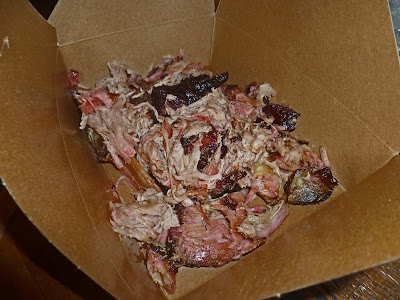 Ms. Goofy ordered pulled pork, one of her all-time favorite barbeque items. The cooks slathered her pulled pork with a vinegar sauce. Vinegar sauce with pulled pork is a traditional sauce and done correctly can be a work of brilliance. This offering was inedible  The only thing you could taste was vinegar. Ms. Goofy claimed the Mac & cheese was gloppy and gritty. Ms. Goofy left a full plate of food which is a very rare occurrence. The server even noticed the full plate of food. She said another customer had the same complaint. The server offered to give us a plate of food to go of some un-sauced pulled pork. This un-sauced pulled pork was very good. It was a nice offering by our friendly server but a little late. 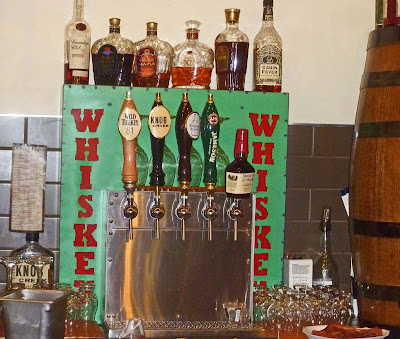 I would like to mention a feature of the bar. Whiskey on tap is offered. Where have I been? I do not think you can order it by the pitcher but they do have a great selection of local micro-beers that you can. Sauced BBQ & Spirits is a fun lively place with a great wait staff. The barbequed meats need some work, a lot of work. The kitchen turned out some great looking food but neglected to properly season these offerings. We may return because of the fun factor and whiskey on tap. There are other menu items that sound tempting like the pimento cheese sandwich or the pulled pork stuffed jalapenos. See you soon!

Oh, sad! That you left a full plate of food speaks volumes.

I been to Sauced BBQ twice I think your criticism is to easy on kitchen.

Zoomie, It is very, very, very rare of Ms. Goofy to leave pulled pork on her plate.

greatwhite hunter, Oh Great White Hunter you are wise in your ways. I bow to your acknowledgment of my assessment and humble critique of said kitchen.Please forgive me.

Bacon b@%^!h. You maybe forgiven if smokey J's meets my low standards. I think Sauced should be closed for crimes against pork.

greatwhite hunter, Can I use that line? I love it. "Crimes against Pork"

Yes you can at the cost of one tomato pre uses. So said tomato must come from your back yard at the peak of tomato season.

greatwhite hunter, Okay, but peak tomatos are two months away. I actually harvested a cherry tomato yesterday. I will be harvesting fresh peas this week.

At least they have whiskey on tap... Crimes Against Pork. Sounds like a good title for a Chilebrown autobiography...

Alas I too sat through dinner at Sauced, and was not a happy camper. While visiting my Bro-in-law we went there twice giving me a chance to "try everything," Thank goodness I don't have to go back. Bland and sweet is what their name should be. And the "Burnt-ends" were not true ends I think they were just rib meat pot under the broiler. Bla bla bla.

Three Dogs BBQ, Hmmmm, I am not sure about that autobiography. The title of course would be Mad Meat Genius.

Toons, It seems to be a consensus about the kitchen. It is a shame because there are a lot of good qualities about the place.

As a BBQ judge and having tasted some great que, I'm sure it's hard for you to go into a restaurant and get something you consider really good. As a cook, I have the same issue, but had some good stuff at Fatback's in Fayetteville, NC week before last.

Well, I'm glad you beat me to it. Just a week or two ago a friend who's been there advised me to strike it from the list. I'll need to go to Bart's Blazin Q for supplies soon so maybe it'll just be a quick whiskey.

Big Dude, The last two BBQ places, Smoky Js and Smoke were very good. We can be judgmental but everybody has concurred on Sauced. Sometimes being a judge can be a curse. Whenever I attempt BBQ Ms. Goofy has her score card ready.

Aaron, Sauced has great beer on tap. Ms. Goofy had a beer from Altamont Beer Works that also has a local tasting room nearby. Also down the street is First Street Ale House.

I hate unrendered fat in my BBQ, just sloppy.