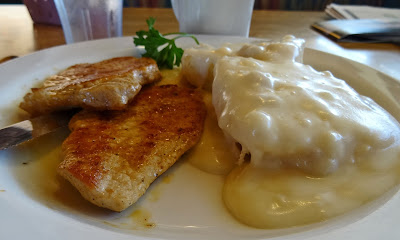 Returning from Yosemite National Park, we passed through Oakdale, the self proclaimed, 'Cowboy Capital of the World'. It was breakfast time and I had a hankerin for my favorite breakfast item of pork chops. I am not sure what drew me to this particular breakfast establishment except it had a fun old time mural directly across the street. The signage outside said Mexican and American food served here. This restaurant at one time must of been a chain because it was exactly like any other breakfast house in the nation. The only thing I wanted to share with you was the pork chop. It had been lightly dusted in Masa Harina before fried on the griddle. Masa harina is a very finely ground corn flour made from corn that's dried, cooked in water with slaked lime (which gives it distinctive flavor), ground, and dried again. It has a distinct flavor and added a Mexican flair to the pork chop. Unique and quiet tasty was the verdict. The biscuits and gravy was not so memorable.Except for the pork chop this entire place was a little forgettable proven by the fact I cannot even tell you the name of this restaurant. 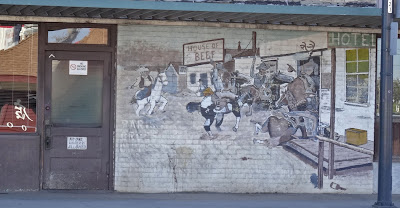 Posted by Chilebrown at 7:10 AM

Pork chops for breakfast sounds like a good plan.

Greg, Don't forget biscuits and gravy to glue it all down in your tummy.

Cowboy capital of the world seems an odd claim for a place in CA.

Big Dude, Their claim. In town is another stop called the House of Beef. If you enlarge the mural you can see the image.