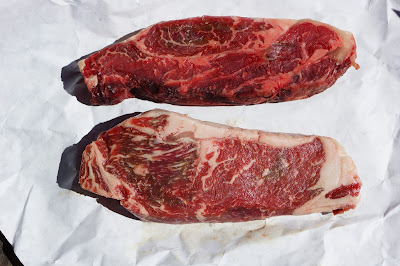 Ladies and Gentlemen, in this corner we have an American Kobe New York strip steak from Snake River Farms and in the opposite corner we have an aged USDA Choice New York strip steak from Willowside Meats of Santa Rosa. These two premium steaks will do battle on the bbq grill tonight. Both have lofty pedigrees that will make any carnivore swoon. The Snake River steak is a highly marbleized cut of protein from the American version of Kobe Waygu beef. This breed of cattle originated in Japan, were they are reputed to be pampered, massaged and fed a diet that includes sake and beer. . The steak from Willowside is a highly marbled USDA Choice grade beef that was hung and dry aged for a minimum of 10 days. We will cook these steaks using the same methods and temperatures. Will one emerge from the ring victorious? Let the dinner bell ring  and “Let’s Get Ready to Rumble!” 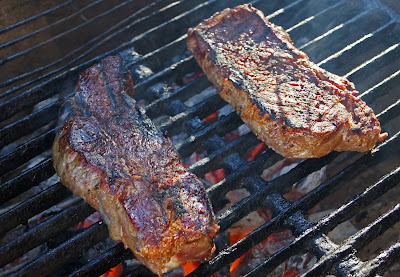 The Willowside cut is of a darker color. It is also of a firmer texture than the Kobe. The Kobe beef has a beautiful marbling of fat and is a little softer in texture. Salt & coarse ground pepper was applied one half hour before cooking. A very hot mesquite charcoal was built. This fire was popping and squirting molten heat for a quick cook time. The grill was oiled and the steaks took their respective corners. Four minutes on each side with a turn at the two minute mark for grill marks was the cooking time. Ten long minutes of rest time. Ladies and Gentlemen we have a split decision. We shall read the score cards.

Was there a clear winner in the steak battle royal? Both steaks were premium in quality and flavor. They both would proudly be served at any high end steak house. Both ringside (barbeque) judges concurred on their decision. The Snake River Farm steak had butter like mouth feel that provided lusciousness to each and every bite. There was great beef flavor. There was a very so, small tug to the chew. Was it tough? By no means, absolutely not, but compared to our other opponent the Willowside steak it was not as tender. The Willowside steak was so very tender. There was a deep, rich, concentrated, earthy, comforting beef flavor that made this beef lover swoon. The aging process and the quality of beef produced a memorable flavor and experience that we crave. Willowside Meats aged New York strip steak will win this battle tonight.  Both steaks are champions at our ringside table.

That would have been a fun comparison for me to make as I enjoy a good strip steak. I'm surprised at the winner, but coming from master meat tasters I'm confident the results are accurate. Can you share the price/lb on each one.

The SRF Kobe is normally 55 dollars per steak but is running a sale at 38 dollars with a shipping fee of 15 dollars. The Willowside aged ran around 15 dollars a pound and is a little over an hour drive from our house. We frequent Willowside. SRF sells a high quality product and Ms. Goofy gave me a very special brisket for Christmas. Check it out. http://www.madmeatgenius.com/2015/02/touchdown-brisket.html

Nice breakdown of the comparison. I've done a good number of Wagyu briskets at this point but have done very little with Wagyu steaks. I have just been hesitant to pull the trigger on them because of the price and buying them sight unseen. When I buy prime steaks locally, I'm like a kid buying a goldfish at the pet store, taking my time picking out just the right one.