THE NEW BOY KING IS CROWNED 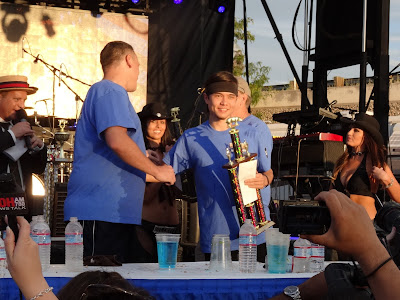 One of our highlights of the 'Best of the West Rib Cook-off' held in Sparks Nevada this Labor Day weekend is the rib eating contest which was held Wednesday evening. I have to admit we are fans of Joey 'Jaws' Chestnut. We have watched and followed his domineering career in the mass consumption eating arena. He has been the King of asparagus, hot dogs and rib eating. Nobody has come near his throne until now. Matt 'Meagatoad' Stonie is the new kid on the block. At Coney Island's Nathan hot dog eating contest Matt beat Joey to demand respect. We were ringside tonight to see the latest battle between the old regime and new. 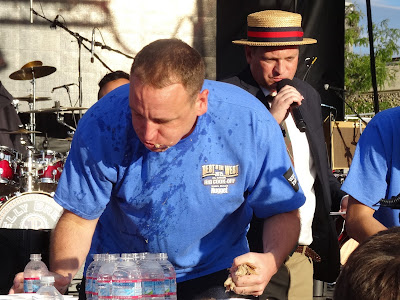 We arrived half an hour early to take our place at front stage. This has its risk being so close in case of a possible "Reversal of Fortune'. We were not scared. We were there to root on our hero Joey. The announcer whipped the crowd into a ecstatic flurry of emotions with his fancy banter. The bell was rung and the eating frenzy began. This was an intense and possibly the longest 12 minutes we have ever witnessed. Ms. Goofy actually got hit by a wayward airborne piece of rib. We are not sure if a contestant inadvertently threw it or the unthinkable. Ms. Goofy survived her ordeal and the 12 minutes were completed. 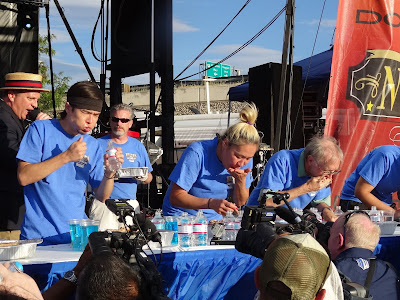 The eaten picked over cleaned ribs were weighed to determine the winner. Matt Megatoad Stonie was declared the victor with 10.5 pounds of ribs. It was a spectacular battle. The results were a little disappointing for Joey Chestnut fans but this was rib eating competition at its finest. Congratulations King Stonie.
Posted by Chilebrown at 12:24 PM