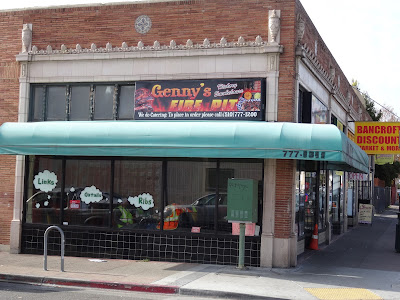 We are heading to East Oakland to experience ‘Genny’s BBQ Pit’. Ms. Goofy is away at her mud wrestling seminar so yours truly is flying solo.  Oakland is my home town. While growing up we knew to avoid certain neighborhoods and Genny’s is located in one of them.  Luckily my parking karma was on full tilt because a spot right in front was waiting for me. While exiting the vehicle I could not help notice the liquor store across the street with several security guards at their post. Safely inside was a small dining area with 2 ½ tables and a counter to place your order. This inside had a funky vibration. A little rundown with some storage items and stack of wood right in the center of the room was the scene.  I will assume that Genny took my order. 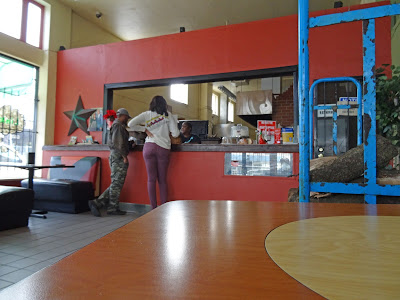 Genny took my order. She seemed to be in charge because she was barking out orders to her two assistants. Ribs and brisket are my choices in a new bbq restaurant. Genny told me it would take an extra five minutes for my order. Let me paint a picture of the dining area. There were two booths that were occupied with a third table but with only one booth chair. I sat in my half booth and waited for my order. Twenty minutes later Genny motioned me to the counter to pick up my order. I rose and walked all of 15 feet when  a gentleman (?) who appeared to have drunken his breakfast sat in my half a booth. Genny saw this transpire and immediately ordered her minions to get me a table and chair. Oh my! 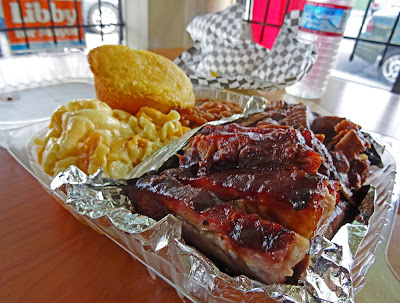 The bbq meal was plated in a plastic clamshell. This container was heavy. I do have to admit the proportions were very generous. The ribs and brisket were served together in a foil lined section. They were hot and steaming most likely just out of the smoker. The brisket was thinly sliced and cut into chunks. The ribs were also creatively cut. There was some heavy cleaver action on these meats. Let’s start with the brisket. It was sauced with a molasses, tomato and possibly coffee based sauce. The sauce was not heavy handed. The smoke was good with its presence saying hello. The slices had a chew to them. Fat was a plenty on this toothsome offering of brisket. It was seasoned nicely with a chewy bark, emphasis on the chewy. 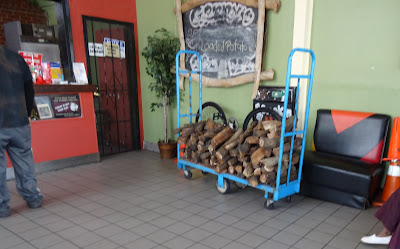 The ribs were cut every which way. Each and every bite was a little different. These too had a chew and were  under done in my opinion. Rib tips and bones were included in this offering. They were seasoned nicely and had decent smoke. I asked one of the assistants what kind of wood was the pile in the center of the restaurant. He replied: ‘It is either Redwood or Oak, I am not sure”. I personally hope it is the latter. 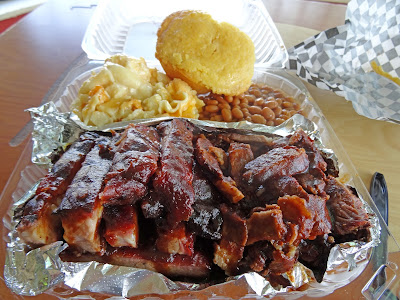 The sides were decent. The cornbread was cakelike and the beans were on the sweet side. The highlight of this meal was the mac & cheese. It was full of processed cheese, warm, gooey, ooey and so full of comfort. Yup, I loved it. It was definitely an adventure venturing to Genny’s BBQ Pit. Chances are very good I will not return.

Your clamshell appears to be a bit of a hot mess. When you say that the mac and cheese was the best part of your visit to a BBQ joint, that says it all.

Three Dogs BBQ, I do not even want to mention the intestinal problems I had last night. I cannot verify Genny's was the main culprit.

It must be difficult for a master judge to get anything near good que from a restaurant. I have trouble and I'm just an amateur cook.

Big Dude, It can be sometimes. We are definitely critical about taste and tenderness but realize competition and restaurants bbq can be two different animals. We try to judge restaurants as a whole package. Food, service, ambience, value and more are taken into consideration. This was a fail on many levels.